In a Netherlands zoo, an elderly chimpanzee named Mama is weak and dying. Elderly biology professor Jan van Hooff, who has known the primate for four decades, enters Mama’s enclosure—something usually too dangerous to attempt, given the strength of chimpanzees and their capacity for violent attacks. In their final, poignant encounter, she grins and reaches for him, embraces him, and rhythmically pats the back of his head and neck in a comforting gesture that chimpanzees use to quiet a whimpering infant. 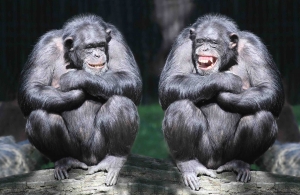 “She was letting him know not to worry,” writes Frans de Waal in his new book, Mama’s Last Hug: Animal Emotions and What They Tell Us About Ourselves.

As one of the world’s most prominent primatologists, de Waal has been observing animals for four decades now, debunking myths around the differences between animals and humans. His latest book focuses on the emotional lives of animals—showing that humans and other animals may be more alike than we think.

Like de Waal’s other books, Mama’s Last Hug is full of stories, making it highly readable, informative, and emotionally resonant. In another story he recounts, a younger female in Mama’s colony, Kuif, couldn’t produce enough milk to keep her babies alive; so de Waal taught her how to feed an adopted infant with a bottle. Kuif turned out to be a caring and protective mother, learning on her own how to remove the bottle when the baby needed to burp. Afterward, each time de Waal approached Kuif, she showered him with affection and expressions that truly seemed like gratitude.

After Mama’s death, de Waal witnessed the other chimpanzees touching, washing, anointing, and grooming her body—gestures very similar to what humans do after a death. Given such observations of chimpanzees, de Waal asserts, “Their socio-emotional lives resemble ours to such a degree that it is unclear where to draw the line.”

While de Waal begins his observations with chimpanzees, he also presents fascinating glimpses of the emotional lives of other animals. For example, Asian elephants wrap their trunks around each other as an expression of consolation. Even rodents, once thought to be unaffected by emotions and devoid of facial expressions, have been found to “express anguish through narrowed eyes, flattened ears, and swollen cheeks.” They also have facial expressions for pleasure, and they recognize these states in other rats. As for horses, De Waal notes that their faces are “about as expressive as those of the primates.”

In dogs, a key facial expression—the “inner-brow pull”—makes their eyes appear larger. This gives them that sad, puppy-like look that pulls at the heartstrings of humans, sometimes leading to canine adoptions. De Waal also digs at an oft-asked question: Do dogs feel shame when they do something wrong? It reminded me of online videos where you see garbage overturned and a dog slouched down, staring at the floor in a way that viewers interpret as “guilt.”

“No one doubts that dogs know when they are in trouble,” writes de Waal, “but whether they actually feel guilty is a point of debate.” According to a study by Alexandra Horowitz, the canine guilty look—“lowered gaze, ears pressed back, slumped body, averted head, tail rapidly beating between the legs—is . . . not about what they have done but about how their owner reacts. If the owner scolds them, they act extremely guilty. If the owner doesn’t, everything is fine and dandy.”

De Waal draws a clear distinction between animal behaviors that connote emotions readable to outside observers and what animals actually feel.

“Anyone who claims to know what animals feel doesn’t have science on their side,” he writes. “Emotions and feelings, while often conflated, are not the same.” Emotions drive behavior and come with physical cues that allow them to be observed and described; feelings are internal subjective states known only to those who possess them.

So, though de Waal views elephants as highly empathic, emotional beings—given how they will rush to comfort a fellow elephant in distress, and how they can recognize themselves in a mirror—he acknowledges that some scientists remain skeptical because we can’t ask elephants (or any animal) about their feelings. “The possibility that animals experience emotions the way we do makes many hard-nosed scientists feel queasy,” de Waal points out, “partly because animals never report any feelings, and partly because the existence of feelings presupposes a level of consciousness that these scientists are unwilling to grant to animals.”

What animals can teach us about ourselves

As de Waal explores human and non-human emotional territory, he finds considerable common ground. Bonobo babies who are orphaned and raised without maternal love suffer just as human babies do when similarly deprived. Orphaned bonobos have trouble regulating their emotions, whereas bonobos who grow up with maternal affection learn how to weather upheaval. And, just like humans, bonobos who haven’t been nurtured also have trouble comforting others who are in distress. 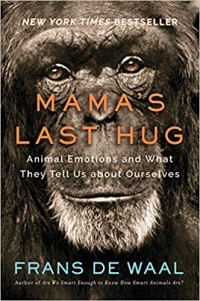 “For me,” de Waal writes, “the question has never been whether animals have emotions, but how science could have overlooked them for so long.”

Just as de Waal’s book makes readers more attuned to the emotional life of animals, it gives us more than enough to ponder about our own human emotions.

As de Waal compares human behavior to our closest relatives’, he finds much to observe and report. The human smile, for instance, may be linked to the nervous grin found in other primates. “I seriously doubt that the smile is our species’s ‘happy’ face, as is often stated in books about human emotions,” he writes. “Its background is much richer, with meanings other than cheeriness.” Instead, a smile could mean nervousness, a desire to please, amusement, or attraction.

Additionally, we humans “often wear plastic smiles with no deep meaning whatsoever.” How do you tell which is which? Studies by 19th-century French neurologist Duchenne de Boulogne identified two kinds of human smiles: The genuine version, an expression of positive feelings and joy, is known as the “Duchenne smile” and involves not only lifting the mouth corners and pulling back the lips, but pulling back the muscles around the eyes, resulting in narrowed eyes and wrinkled surrounding skin. A “fake” smile involves the mouth area but not the eyes—a useful distinction to know!

In considering current events, the author identifies two driving forces behind human politics: leaders’ lust for power and followers’ longing for leadership. De Waal observes that hierarchical battles occur in groups of humans as well as in groups of apes, with bullying tactics used by “alpha males” in both. “Like most primates, we are a hierarchical species,” he concludes.

Yet humans shrink from admitting that about themselves, he points out, preferring to describe themselves in gentler, more rarified terms. De Waal writes, “This is why it is so refreshing to work with chimpanzees: They are the honest politicians we all long for.”

Instead of considering ourselves so refined and rational, he suggests, it’s time for us to squarely face the degree to which we—like other animals—are driven by emotions.