What does it mean to kneel? What emotions and beliefs does this action communicate? Does your culture or group membership affect how you see gestures like kneeling? 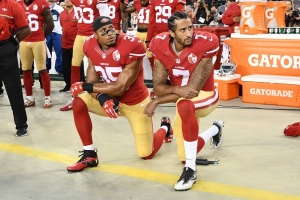 Colin Kaepernick #7 and Eric Reid #35 of the San Francisco 49ers kneel in protest during the national anthem prior to playing the Los Angeles Rams in their NFL game at Levi’s Stadium on September 12, 2016 in Santa Clara, California. © Thearon W. Henderson/Getty Images

Those were some of the scientific questions raised when San Francisco 49ers quarterback Colin Kaepernick decided last year to kneel, instead of stand, for “The Star-Spangled Banner” before a preseason game. Teammate Eric Reid joined him. Their cause? Police violence against unarmed black people.

His knee unleashed a movement—and triggered a chain of events that culminated last week in the president of the United States calling a player who kneels a “son of a bitch.” Over the following days, dozens of NFL players—including entire teams—“took the knee” before their games. In response, crowds booed.

To some, Kaepernick and the players who kneel with him are “unpatriotic,” “ungrateful,” “disrespectful,” “degenerate,” to quote just a few of the descriptions hurled their way. To others, Kaepernick’s act—for which he may have paid dearly, as he is now unsigned—makes him a hero.

At first glance, research into emotion and nonverbal communication suggests that there is nothing threatening about kneeling. Instead, kneeling is almost always deployed as a sign of deference and respect. We once kneeled before kings and queens and altars; we kneel to ask someone to marry, or at least men did in the old days. We kneel to get down to a child’s level; we kneel to beg.

While we can’t know for sure, kneeling probably derives from a core principle in mammalian nonverbal behavior: make the body smaller and look up to show respect, esteem, and deference. This is seen, for example, in dogs and chimps, who reduce their height to show submissiveness. Kneeling can also be a posture of mourning and sadness. It makes the one who kneels more vulnerable. In some situations, kneeling can be seen as a request for protection—which is completely appropriate in Kaepernick’s case, given the motive of his protest. 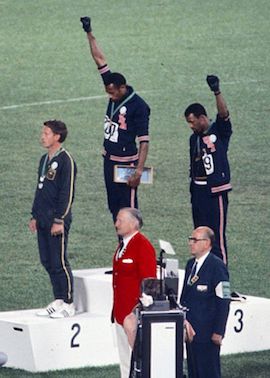 As sports protests go, taking the knee might not seem nearly as subversive or dangerous as thrusting a black-power fist into the air, as Tommie Smith and John Carlos did during their medal ceremony at the 1968 Summer Olympics in Mexico City. Researchers David Matsumoto and Jessica Tracy show that even blind athletes from over 20 countries thrust their arms in the air in triumph after winning, which reveals the deep-seated urge to signal power with that body-expanding gesture. You can also find power in the fist. In the Darwinian sense, the fist is the antithesis of the affiliative, open hand, but when we combine a raised arm with a fist it becomes something more communicative—a rallying cry. It’s a gesture that seeks to bring one group together while warning another away.

None of that should be too surprising. But there is an important point of similarity in the raised black-power fist—which makes bodies bigger—and the bended knee, which makes us smaller. Both Carlos and Smith bowed their heads in Mexico City, in a sign of respect and humility that accompanies their social signal of strength and triumph. That mix of messages makes the black-power salute one of the most famous, complex, effective nonverbal protests in our lifetimes—one that we can see echoed on today’s football field.

Which returns us to the kneel. Kneeling is a sign of reverence, submissiveness, deference—and sometimes mourning and vulnerability. But with a single, graceful act, Kaepernick invested it with a double meaning. He didn’t turn his back as the anthem was played, which would have been a true sign of disrespect. Nor did he rely on the now-conventionalized black-power fist.

Rather, he transformed a collective ritual—the playing of the national anthem—into something somber, a reminder of how far we still have to go to realize the high ideal of equal protection under the law that the flag represents. The athletes who followed him are showing reverence for the song and the flag, but they are simultaneously deviating from cultural norms at the moment their knees hit the grass.

By transforming this ritual, the players woke us up. Our amygdalae activate as soon as our brains spot deviations from routine, social norms, and in-group tendencies. We want to know what’s happening and why. We need to know if the deviation poses a threat to us or our group. This may start to explain why so many Americans reacted with such fear and rage to a few athletes kneeling on the field in the midst of a national ritual.

But there’s a lot more to it than that.

“Group membership affects interpretation of body language because groups develop norms and expectations around behavior, language, and life,” says our UC Berkeley colleague Rodolfo Mendoza-Denton, an expert on intergroup communication. “Breaking these norms is used intentionally to signal disagreement with the norms, as well as to signal that one is not conforming. It sparks strong emotion and backlash precisely because of its symbolic meaning—a threat to the status quo.”

It matters that most of the athletes are black and much of the audience is white, that the ancestors of one group were brought here as slaves and the ancestors of the other were their owners. That’s why, when Pittsburgh Steelers stayed in the locker room as the anthem played, one Pennsylvania fire chief called their coach a “no good n*****” on Facebook, amplifying the racial themes of the debate. That’s why Michigan’s police director called them “degenerates.”

When you mix power differences with intergroup dynamics, more factors come into play. Our lab has found that high-power people (say, the president or members of the numerical majority) are more likely to misinterpret nonverbal behavior. The experience of having power makes us less accurate in reading suffering on the faces of strangers and emotions in static photos of facial expressions. Powerful people are less able to take the perspective of others; they’re quicker to confuse friendliness with flirtatiousness. This is the empathy deficit of people in power, one found in many kinds of studies.

Thus, we should not be surprised that many white people misread the meaning of “taking the knee” and fail to see the respect, concern, and even vulnerability inherent in kneeling. Of course, it is also the case that some white people may want to see black people terrorized by police and politically disenfranchised. Any effort to raise these issues by African Americans, no matter how deferential, will incite anger from those who benefit—emotionally or materially—from America’s racial hierarchy.

But from a psychological perspective, that political elucidation still doesn’t quite explain the specific inability of a majority of white football fans to interpret taking the knee according to universal human norms. And why would they take the misperception further, to actually see this humble posture as an act of aggression against America?

There is some evidence from Princeton’s Susan Fiske and Penn State’s Theresa Vescio that high-power people, in not attending carefully to others, are more likely to stereotype others, and more likely to miss individual nuances in behavior. This means that some white-majority football fans may be falling victim to the stereotype of African Americans—particularly large, well-muscled, pro football players—as violent and aggressive. In fact, as we’ve discussed, kneeling is actually the opposite of an aggressive signal.

“We should not be surprised that many white people misread the meaning of 'taking the knee' and fail to see the respect, concern, and even vulnerability inherent in kneeling”

What’s the way forward from here? One of us (Dacher Keltner) has co-authored a paper with colleague Daniel Cordaro that examines the expression of 20 emotions across five cultures. We found that while most outward emotional expressions are shared or partially shared, a quarter are not. It’s in that non-shared space that intercultural conflict flares up—but that conflict can sometimes lead to cross-pollination, as people come to comprehend each other and synchronize their gestures.

That can’t happen all by itself. It requires bravery, curiosity, empathy, and even a little forgiveness, for when someone gets a signal wrong. It takes effort to connect with people who are different from you.

Will Americans one day look back on Kaepernick’s symbolic act as a moment when we started to understand each other just a little bit better? When many kinds of people were galvanized to work concretely on the problems of police brutality and racial bias in the criminal justice system, instead of discounting the concerns of African Americans?

Perhaps. Such a time seems very distant from where we are right now, as our society’s leaders foster racial antagonism and people cannot seem to recognize the emotion and belief behind even the gentlest of gestures. Change happens, but it doesn’t happen without us. Sometimes, you need to kneel to conquer.

This article was originally published on Scientific American. Read the original article.