One of the ongoing themes of the current presidential campaign is that Americans are becoming increasingly distrustful of those who walk the corridors of power—Exhibit A being the Republican presidential primary, in which three of the top four candidates are outsiders of Washington.

Yet at the same time, these three—Donald Trump, Ben Carson and Carly Fiorina—are very powerful in their own way, be it as a billionaire entertainment and real estate mogul, a neurosurgeon, and conservative media pundit or a former corporate chief executive officer.

So what makes us place trust in powerful people? We performed four studies on the nexus between power and trust and found some surprising results. 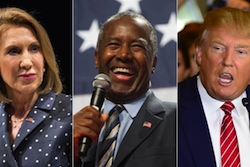 Typically, when asked, many people will be reluctant to admit that they would place blind trust in somebody who is in a high-power position. Too many stories of politicians and top executives abusing their power run through the media. Making oneself vulnerable to such power holders thus doesn’t seem like the sensible choice.

Rational actor theories agree with this anecdotal wisdom: they suggest that people will be trustworthy toward someone else only if being so is instrumental in maintaining that relationship. Given that powerful people tend to have many partners to choose from, they place—relatively speaking—less value in any particular relationship, reducing the likelihood that they will behave in a trustworthy fashion.

In other words, powerful individuals can afford to betray others—they can always find new people to work with. Rational actor theories further assume that the less powerful party to an exchange will predict this behavior and, as a result, place less trust in their more powerful counterpart.

However, our research shows that this is not the case. In fact, we observe exactly the opposite pattern. Over a wide variety of different experimental paradigms and measures, we find that less powerful actors place more trust in others than more powerful actors do. That is, trust is greater when power is low rather than high.

But why would that be the case? Why didn’t we find results consistent with predictions from rational actor theories?

Studies in power and trust

We conducted four experiments that tested whether being in a weaker or stronger power position is linked to differences in trust perceptions and behaviors.

Study one used an established negotiation task, in which participants were asked to negotiate over a consignment of cellphones. We put participants either in a low- or high-power position, depending on the viability of their fall-back option (another buyer) in case the negotiations with the partner failed. Negotiators in the high-power position trusted their negotiation partner significantly less (as measured through a perceptual survey scale of trust) than did participants in the low-power condition.

Study two was based on an investment task (also known as the “trust game”), in which participants had the option to either keep a monetary endowment to themselves or invest it in a partner, in which case the money was tripled, but it would be up to the partner to decide whether to send back some of the money or keep all the money to him- or herself. Some participants were put in the position of the “power player,” enabling them to switch partners if they wanted to. We found that power players sent significantly less money – and thus trusted less – than non-power players.

Studies three and four both used a scenario in which participants assumed the role of a typist offering services to a new potential client. They could either provide a free sample to the client and thus trust that the client would come back with follow-up jobs or they could save their time and not provide a free sample (and thus not trust the client). Participants were given several pieces of information about themselves and the new client, for example, specifying how urgently needed the typing business is for them and how much the client depended on their services, which allowed us to manipulate power.

In both studies, participants in the high-power condition were significantly less trusting. Study four furthermore provided insight into the causal chain connecting power and trust. It revealed that having low power amplifies people’s hope that their exchange partner will turn out to be benevolent, which then leads to their decision to trust.

In sum, people who lack power are motivated to see their partner as more trustworthy in order to avoid the anxiety inherently attached to their feelings of dependence. This is known as “motivated cognition.”

These power-disadvantaged actors thus effectively protect themselves by perceiving power holders in a positive light, even if little or no relevant information would support such perceptions. Their hope that their powerful partner will be trustworthy dominates their cognition and decision-making.

The powerful partner, on the other hand, has no reason to engage in significant motivated cognition. In sum, the decision to place trust seems to be based more on one’s motivation to protect oneself from unwanted realities than on relatively rational calculations of the other party’s deliberations.

Our results bring new insight into the drivers of trust decisions. Trust is a critical ingredient in successful social exchange. But the threat of misplacing one’s trust and suffering the detrimental consequences of a breach make trust risky. Thus, researchers have paid considerable attention to the factors that facilitate or hinder trust in various settings.

However, one potentially important source of variation in trust had received little attention so far—namely, power. This is surprising, since many, if not most, trust relationships involve nontrivial power inequalities between exchange partners. Examples include relationships between patients and doctors, students and professors, employees and supervisors, and small and large firms.

It is well-known that behavior in social exchange relationships is significantly affected by power inequalities that involve one actor depending on the other. The prevalence of power inequalities in relationships in which trust is critical led us to ask: does having power or lacking power increase or decrease an actor’s tendency to place trust in others? Our results provide a clear answer to this question. They show that people low in power are significantly more trusting than more powerful people and that this effect can be explained by motivated cognition.

Our findings can be applied to a variety of settings, including the public’s institutional trust in powerful entities such as governments. Recent findings show that many power holders are actually admired and even seen in a very positive light.

Yet this seemingly high trust in power holders contradicts the low levels of trust people have in their leaders. Americans consistently show very little trust in the federal government, with just 24 percent saying they trust it in 2014.

A possible explanation for these divergent perspectives is provided by social distance. Following this idea, while self-reported trust in anonymous political decision makers in far-away Washington may be at all-time lows, trust in local politicians with whom people have interpersonal interactions is often high.

To conclude, on the most general level, our findings may help better understand why societies with stark hierarchical differences can be functioning and enduring. In a counterfactual world where people low in power would refuse to place trust in power holders, many of the advantages of hierarchies (such as improved coordination, reduced conflict and stability) might not be attainable. These considerations underline the centrality of “irrational” acts of trust for the existence of a relatively stable society.

This article originally appeared in the UK-based magazine The Conversation, an independent source of news and views from the academic and research community.