Last week, I met a middle school teacher who broke out in tears as she told me how her students’ behavior was “out-of-control.” I know she’s not alone: Middle school students are notorious for their refusal to follow rules, driving teachers to tears and worse.

I’ll admit that I harbored this negative view of middle school students—until I read some ground-breaking research on middle schoolers that made me think: We’ve got it all wrong. 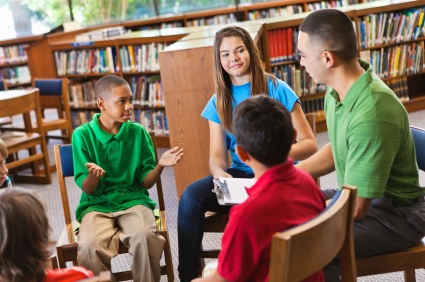 To start with, research tells us that kids have deeply ingrained moral instincts that give them a sense of fairness, of right and wrong, good and bad—and they generally prefer the good. For instance, children as young as six months who were shown a puppet show in which one puppet was a “helper” and another was a “hinderer” overwhelmingly chose to play with the helper, demonstrating their ability to make complex social judgments.

The answer can be found in research by human development experts Larry Nucci and Elliot Turiel, who have identified two important domains that play a role in the moral development of children: moral issues and societal conventions.

Moral issues focus on the effects students’ actions have on the welfare of others (e.g., hitting another child). Societal conventions, on the other hand, focus on norms or rules (e.g., talking in class). Children as young as two-and-a-half years old have demonstrated that they understand the difference between moral issues and societal conventions.

Nucci and Turiel stress that, when dealing with student misbehavior, teachers need to take both areas into consideration.

Research suggests that even through adolescence, kids maintain a strong emotional response to moral issues where the direct effects on another person are clear—they still know it’s wrong to hit other people or pick their pockets, for instance.

Once they hit middle school age, however, they become less bound by societal conventions. This means that when their moral decisions have only indirect effects on other people, they become less likely to do the right thing. For example, even though they wouldn’t actually pick someone else’s pocket, they’re less inclined than younger kids to return money they find on the street. In that case, the indirect nature of the dilemma doesn’t stimulate their moral instincts, and we can’t count on them to adhere to societal conventions like they did when they were younger.

Think about it this way: Middle school students have just spent the first 11 or 12 years of their lives following the rules. All of a sudden, they wake up to the fact that these rules were set by adults and are somewhat arbitrary. Developmentally, they haven’t yet understood why these rules were developed in the first place: to protect the welfare of other people. They typically won’t make that connection until they’re about 15 or 16. So their behavior often falls in a moral gap between the fidelity to the rules they showed as young kids and the more complex moral reasoning they develop in their later teens.

So what can teachers do to help middle school students bridge this gap? Here are some developmentally-appropriate suggestions.

1) When a student misbehaves, tell him or her whether the misbehavior broke a societal convention or a moral issue—and then talk about it. In other words, if a student breaks a classroom rule, ask him/her to consider how the action impacts the smooth running of the classroom. If the misbehavior is a moral transgression against another student, explore how the action impacts that other student’s welfare. Researchers have found that teachers who match their discipline to the type of infraction (moral vs. convention) are considered more knowledgeable and effective by their students.

Talking about the misbehavior helps students realize the impact of their actions on others and understand why societal conventions are necessary.

2) Discuss moral transgressions as they occur—and ask how they made students feel. Students more deeply understand the impact their actions have on others when they discuss motives and consequences with each other.

It’s also crucial to include students’ emotions in the discussion. Research has shown that children have strong emotional reactions to moral situations because they’re about care and harm to other people rather than adherence to rules. For example, moral transgressions cause children to respond with anger, sadness, or empathy for the victim, while positive moral interactions foster emotions of happiness. The breaking of societal conventions, on the other hand, brings very little emotional response from children.

By discussing how they feel—and made other people feel—in moral situations, students become better able to identify and regulate their emotions in future moral dilemmas.

3) Give students the opportunity to have input on classroom rules. In setting boundaries for middle schoolers, schools often do exactly the opposite of what’s developmentally appropriate: greater teacher control and limited opportunities for students to practice decision-making and choice. Research has demonstrated that the mismatch between students’ need for autonomy at this age and schools’ greater wielding of control causes students to lose motivation and interest in school. Allowing students to craft societal conventions for school helps them understand the need for these conventions and keeps them engaged in the learning process.

The research is clear: Instead of clamping down on middle school students when they misbehave, we need to engage them in discussion. This is critical to their moral understanding—and research suggests it can even impact their long-term academic success.

Hopefully, we can turn some of those middle school tears into smiles for students and teachers alike.

Middle school is a particularly rough time for
many kids, particularly into the onset of
puberty. Identity issues often seen to pop up
here.