Even before they’re out of diapers, kids consistently help others, research shows. But what motivates them? A new study suggests it might be a deeply rooted concern for others, and not the desire to “get credit,” that sparks kids’ willingness to lend a hand.

Researchers at the Max Plank Institute for Evolutionary Anthropology observed 56 two year olds who were broken into three groups. All groups saw an adult who dropped an object—either a crayon or a can—and struggled to pick it up. 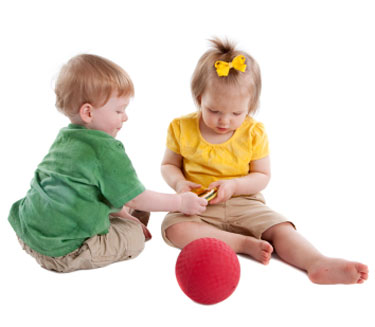 One group of toddlers was allowed to intervene and help the adult. Toddlers in another group were held back from helping by their parents. The third group watched the adult receive help from another adult.

The results of the study, which is forthcoming in the journal Psychological Science, show that the children’s pupils did dilate after seeing the adult in need, suggesting heightened feelings of sympathy. What’s more, ten out of the 12 children who were allowed to help did so.

This suggests that the toddlers were motivated to help simply because the individual needed help, not to benefit their own reputations. If the kids only cared about their reputations, write the authors, “they would have preferred to perform the helping act themselves (to get ‘credit’),” and their pupils would have remained dilated even if they saw someone else help.

Instead, they seemed to show a genuine concern for someone in need and were relieved to see that person helped, regardless of who did the helping.

Past research has indicated that kids are motivated to help others as early as age one, but until now no research has explored the nature of this motivation, says Robert Hepach, the lead author of the study. Researchers didn’t know whether kids were motivated by their own internal concern or by anticipation of external pressures and rewards.

“Certainly, children’s concerns for self-reputation will gradually develop as they encounter new people and learn the social norms of their cultural group,” write Hepach and his colleagues. However, add the authors, their findings suggest that concerns about self-reputation do not explain how altruism emerges early in life.

“Young children’s early helping,” they write, “is motivated by a genuine concern for the welfare of the person in need.”

I have 3 little nieces and i see this in them all the time. Where we, adults, think twice about helping someone, the kids dont even think about it, they just go and help them.

I often experience this with my son (he is 2½ years old). One day we sat on the train, and a woman was crying. Noone said or did anything, but my son jumped down from my lap, went over to her and stroke her cheek. I was so proud of him. This led her also to smile, and this just shows how loving and helpful kids are.