How can different people evaluate moral issues in such different ways?

This is the question that Jonathan Haidt tries to answer in his latest book, The Righteous Mind: Why Good People Are Divided by Politics and Religion. 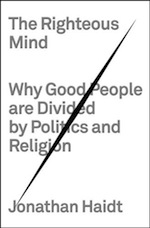 Haidt, a professor at the University of Virginia who studies the psychological bases of morality, makes a convincing argument that morality is ruled by intuition instead of reason. According to Haidt, the American liberal viewpoint of morality—based predominantly on the notion of not doing harm—is not just out of step with conservative morality. It’s out of line with much of the rest of the world.

Haidt has reached his conclusions about moral judgments by studying how people from different social groups in the United States and around the world respond to morally ambiguous scenarios.

For example, he asks people questions like, “Is it morally wrong for a man to have sex with a dead chicken before he eats it?” and then analyzes their responses. While most people will find this scenario disgusting, some will not see it as morally wrong, especially if they think morality is based primarily on the notion of harm. This makes them liberals, by Haidt’s lights.

But many other people will find the act morally reprehensible, even though they may have trouble explaining why. This is a response Haidt consistently finds among people who identify as political conservatives. According to Haidt, we construct our moral arguments in response to our gut reactions. Morality follows emotions, not the other way around.

In American politics, Haidt has found that liberals’ moral reasoning is based on two primary values: caring for others and fairness. Conservatives, on the other hand, use these values plus additional factors, like loyalty, authority, and sanctity. To Haidt, this helps to explain why conservatives think flag burning in any context is wrong (because it suggests disloyalty to the group and it desecrates something that is a sacred symbol), whereas liberals would find it less offensive, since it doesn’t involve direct harm toward anyone.

Haidt argues that conservatives’ moral worldview is more common around the world than liberals’. Haidt explains why many societies, for example, would not find it reprehensible for husbands to discipline their wives—because men have more authority in those places. He also points to the taboos cultures have around food and cleanliness, generally to honor the sanctity of the body as a representation of God.

The problem, notes Haidt, is that most of us—whether liberal or conservative, American or not—are locked into our own moral viewpoints in ways that make it difficult for us to understand the moral concerns of others. Even so, he does identify some common ground. Although moral reasoning is diverse, the value of not doing harm to others appears to be a universal consideration, if apparently one that is more important to liberals. Altruism, Haidt writes, is evolutionarily selected for, because cooperative groups—where members look out for one another, sometimes even sacrificing themselves for the sake of the group—fare well in the long run. Though individuals often act in ways that are self-serving, morality has evolved to keep people cooperating in groups and prevent individuals from being ostracized, something that is particularly dangerous in hunter-gatherer societies where interdependence is key for survival.

Although the book is thorough in its dissection of moral philosophy and science, it is not very prescriptive. Haidt doesn’t give much hope for liberals finding common ground with conservatives, for example, or for religious groups understanding each other. However, he does argue that educating oneself about these differing moral viewpoints can get us part of the way there, and I, as a liberal, found his explanations of the conservative mindset illuminating.

What’s more, Haidt writes, it wouldn’t hurt for all of us to get off of our high horses. After all, we humans are each grappling with moral choices that are directed, in large part, by forces beyond our conscious control. Perhaps if we kept that in mind, we could be a little more tolerant and patient with each other—even with someone of the opposite political persuasion.