It seems as if everyone has something negative to say about the younger generation. Critics call today’s kids narcissistic and spoiled, blaming parents for being too permissive and overprotective. They say children don’t have enough grit and determination to get through life, leaving them unprepared for the real world.

But author Alfie Kohn debunks this kind of thinking in his new book, The Myth of the Spoiled Child: Challenging the Conventional Wisdom about Children and Parenting. 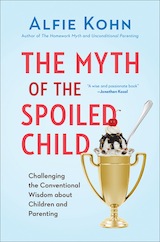 Kohn has made a name for himself by questioning the origins and scientific accuracy of our cultural assumptions—for example, in his book The Homework Myth, he wrote about the lack of evidence supporting the benefits of assigning homework. Now, he’s taken a similar tack with today’s “youth entitlement” and “permissive parenting” critiques, combing through the social science research and finding virtually nothing to support these claims.

Although Americans seem bent on believing that the current generation is fundamentally “spoiled,” this view is not very different than that of every previous generation, according to Kohn. Writings by prominent authors over the last 150 years and even earlier demonstrate how every generation has had similar perceptions about the youth of their times. In addition, survey results used to suggest kids are more “narcissistic” these days are flawed, writes Kohn, reflecting a bias among researchers and a failure to even distinguish between healthy and unhealthy forms of narcissism.

“The generalizations one chooses to apply to the younger generation seem to depend mostly on the worldview of the person doing the generalizing,” writes Kohn. “Older people have always insisted that children are unusually spoiled, or that young adults are usually egocentric or entitled…one can make the opposite case—that today’s youth are more tolerant than their parents were and admirably committed to making the world a better place.”

The problem, he suggests, does not lie with kids, but with the backlash coming from “traditionalist” quarters that want children to be compliant and under parental control. The traditionalist view is that positive regard toward children should be conditional rather than based on unconditional love, that not everyone deserves to succeed, and that life should include deprivation in order to instill self-discipline. This view currently pervades discussions of education and parenting, as well as politics, argues Kohn, but it is not based on science.

For example, he questions the prevailing wisdom that kids need to learn the benefits of failure. Research shows that kids who fail are less likely to try harder in the future and often just give up, he insists, and that what’s important for progress in kids is having caring mentors and long-term goals they find intrinsically worthy. Not all failure is good; in fact, exposing kids to highly competitive situations, like spelling bees or classes graded on a curve, where failure is inevitable for many, may encourage some kids to work harder at winning; but it often kills intrinsic motivation and leaves a trail of dispirited “losers” in its wake.

“What’s most reliably associated with success are prior experiences of success, not with failure,” he writes. “Although there are exceptions, the most likely consequence of having failed at something is that a child will come to see himself as lacking competence.”

Kohn also takes exception to interpretations of the famous “marshmallow” experiment by Walter Mischel and colleagues, in which children were told that they could eat one marshmallow now or, if they could wait some period of time, they would be given two marshmallows to eat.

The original experiment was meant to study the strategies kids used to stop themselves from eating the one marshmallow immediately. But, according to Kohn, that got lost in the rhetoric, and instead the focus changed to the benefits of “delayed gratification.” In follow up studies, kids who were able to wait were found to have higher SAT scores, among other positive outcomes, making people assume a causal connection between self-control and academic performance.

But Kohn argues that the children’s cognitive ability to come up with strategies for distracting themselves—i.e,. closing their eyes or singing—was what allowed them to wait for a second marshmallow, and would explain why they might score higher on an SAT test.

In fact, in another set of experiments replicating Mischel’s study but with a twist, kids who were first primed to distrust the reliability of the researcher to fulfill promises ate the one marshmallow right away much more often than those who were given reasons to trust the researcher. This suggests that kids having trustworthy adults in their lives may be more important than self-control in delaying gratification.

Kohn goes through several more studies, debunking similar conclusions about the benefits of strict parenting, corporal punishment, having “grit,” and other social theories proposed by education or parenting experts. He makes a compelling case that many of these hypotheses get bandied about freely without careful scrutiny because of the public’s desire to see their own preconceptions justified. And the danger here, he argues, is that parents may end up discounting the robust research showing that unconditional love, positive role-modeling, and working with rather than controlling children is what benefits them most and prepares them for success.

But, despite Kohn’s extensive research and cogent analyses, some of his arguments feel forced and repetitive. Perhaps his relentless critique is necessary to counter the prevailing narrative, though I found if off-putting at times.

Still, we need voices like his—even if they are occasionally strident—to remind us why we can’t blindly trust our instincts. The kids are actually all right, writes Kohn, and parents don’t need to be harsher. Unless we want to raise a generation of unhappy, unmotivated kids, who don’t know how to think for themselves, we should probably try less name-calling and more kindness toward our youth.

And perhaps we all need to question the authority of those who suggest otherwise.