In the past, researchers blamed a lack of financial resources and academic skills. Financial aid and special academic strategy programs help, of course, but such steps have failed to eliminate the social-class achievement gap. Studies show that first-generation students often lack the belief that people with their backgrounds deserve to attend or succeed in college—and they can be unaware of the “rules of the game” and thus underutilize university resources that might help them. These and similar factors can ultimately limit their opportunities to succeed, which helps perpetuate social inequality. 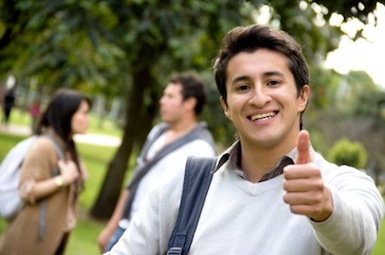 This suggests the problem is psychological, not financial or academic. But what’s the solution? That’s the question explored in a new study in the journal Psychological Science.

Nicole M. Stephens and her Northwestern University colleagues hypothesized that it would help to explicitly connect social-class to difficulties faced by the students. The researchers recruited 168 first-year students at a private university, including 66 first-generation students and 81 continuing-generation students (who had at least one parent with a four-year college degree).

They randomly assigned these participants to two different discussion panels. Both consisted of the same panelists talking about challenges and successes in college. In one, however, panelists specifically linked the content of their stories to their social-class backgrounds. For example, in response to a question about obstacles, one panelist responded:

Because my parents didn’t go to college, they weren’t always able to provide me the advice I needed. So it was sometimes hard to figure out which classes to take and what I wanted to do in the future. But there are other people who can provide that advice, and I learned that I needed to rely on my advisor more than other students.

The hope was that this intervention would equip first-generation students with psychological resources to ultimately boost their academic performance. The students who listened to the other panel, which served as the control, did not hear such explicit links between college and social class.

Researchers surveyed the students after the panels, and found that both group came away with two major lessons: People’s different backgrounds matter and people with backgrounds “like mine” can succeed. However, far more participants in the social-class group had these sentiments. In addition, the social-class panel participants experienced less stress and anxiety, better adjustment to college life, and more academic and social engagements than students in the control group.

But the strongest impact showed up in the grade point averages of the participants.

This study an important lesson that can be utilized in the effort to reduce the social class achievement gap: that talking about differences in a supportive and constructive environment can be empowering as it both helps people make sense of their context and plan for the future.

“We asked whether an educational experience designed to help students understand how difference matters could be utilized to enable first-generation students to more effectively transition to college and overcome background specific obstacles to success,” write the researchers. “The answer is yes.”