So far, 2022 has been a great year for new horror movies. 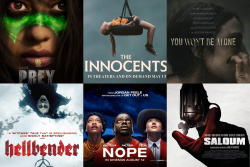 That might be because they were all made in the throes of the COVID-19 pandemic, a global event that seems to have led these filmmakers to plunge deep into themes of isolation, disease, and family bonds. The results are simultaneously beautiful and terrible.

These horror movies highlight many human strengths and virtues: the urge to protect each other from harm, empathy, self-sacrifice, heroism, and more. But I really have to emphasize for Greater Good readers that they do contain horrible things; these movies won’t be everyone’s cup of tea.

With that in mind, if you do like horror movies and you’re looking for something to watch as we approach Halloween, then you should definitely consider this list.

Hellbender might be the best-made movie on this list. It’s also the one I almost didn’t include.

Hellbender is about a mother and teen daughter living in an isolated house in the Catskills. We’re told the daughter, Izzy, has an immunodeficiency disorder and so can’t come into contact with other people. Mom is trying to raise Izzy to be good, but when people wander on or near their land, terrible things happen.

Compared to other movies on this list, Hellbender is not all that violent or gross. The situations are not as psychologically harrowing as the ones in, say, The Innocents or You Won’t Be Alone.

But I almost didn’t include it here because the message that arises from its plot is antithetical to the values we promote at Greater Good. In this movie, to quote existentialist philosopher Jean-Paul Sartre, hell is other people—and goodness doesn’t stand a chance against adolescence.

I decided to include Hellbender because of its backstory. It’s a micro-budget independent film created by a family during the lockdown phase of the pandemic: husband and wife John Adams and Toby Poser, and their teenage children, Zelda and Lulu Adams. They’re all listed as directors, they all act in the film, and they took turns operating the equipment.

From that perspective, Hellbender becomes a fascinating, creative glimpse into the mind of 2020, when we huddled in our increasingly claustrophobic homes. We did that to protect ourselves and each other from disease. And that’s what the unnamed mother in Hellbender is trying to do: protect other people.

If she fails, in the end, we can’t really blame her. No matter how hard we might try, we can’t stop kids from growing up.

There are no jump-scares in The Innocents. It isn’t gory or overly violent. But I’ve rarely seen a movie with such mindbendingly horrible situations—stuff that taps right into our worst fears, like losing control of ourselves and hurting people we love. At the same time, it’s quite beautiful, as Scandinavian horror films often are.

It’s about a small group of children in a pleasantly sterile Norwegian housing complex who spontaneously develop supernatural powers. This movie has an almost snow-globe feel to it; it’s a tiny world being shaken by something we never see, some force of nature that turns these innocents into small gods.

In the world these children create for themselves, empathy and morality are not yet fully developed, and don’t yet exert very much control over their impulses. When the kids torture an animal, it’s because they’re innocent of suffering, and because it gives them a sense of power in otherwise powerless lives.

But the real horror in this story is that they become so different from their parents that adults can’t reach them in any meaningful way (a theme Andrew Solomon explored in his mammoth 2013 book Far From the Tree: Parents, Children, and the Search for Identity). Indeed, these children don’t just have power over animals—they have it over adults.

That’s difficult to discuss without giving away the plot. I will say, however, that The Innocents is a study of how empathy shapes a sense of right and wrong—and how morality calls on us to protect more vulnerable people and stand up, together, for what’s right.

Nope tells the story of one family’s confrontation with a mysterious and deadly creature in the sky. Described as a straightforward tale of survival, Nope might sound simple. But underneath the plot, there’s a lot going on.

Take, for example, references to Eadweard Muybridge’s famed “Animal Locomotion” series of photographs from the year 1885, which is one of cinema’s points of origin. Then there’s a subplot that starts in 1998 when a chimpanzee sitcom star attacks his fellow actors. It’s also about horses, UFOs, Hollywood racism, celebrity culture, surveillance, trauma, spectacle, and more. Nope is a Neo-Western, a disaster movie, science fiction, an anime tribute, and Lovecraftian horror movie, all rolled into one. I should mention as well that it can be quite funny.

If you find all that confusing, Nope might not be the movie for you. But if you’re intrigued, you’ll find Nope to be extremely thought-provoking entertainment. Indeed, the movie operates at an exceedingly cerebral level—it reminded me of the art-house cinema of the 1970s, but with more money and better technology.

What I’d like to highlight here is the complex relationship between Otis “OJ” Haywood Jr. (Daniel Kaluuya) and Emerald “Em” Haywood (Keke Palmer), the siblings at the heart of the film. Alongside the movie’s other themes, we see the relationship between these two unfold through hard glances, harsh words, and ferocious arguments. They both want the other to be something they’re not. Em would like OJ to be flashier, more easygoing, more fun; OJ wants Em to be more responsible and less excitable.

But by the end of the movie, we discover a bond that transcends any strife between them, and we can see how their strengths and weaknesses lock together to make a whole that is stronger than what they can be on their own. It’s a heartfelt, true, simple message: We need each other to survive.

Like many movies on this list, Prey crosses genre boundaries. It’s a horror film, but it’s also a science-fiction action movie, and a revisionist, feminist, anti-racist Western.

Strictly speaking, Prey is a part of the Predator film franchise, which started in 1987 with a movie starring Arnold Schwarzenegger. However, you don’t need to know anything about those movies to enjoy Prey, a prequel that takes place in 1719, somewhere in the North American Great Plains. The hero is Naru (Amber Midthunder), a Comanche woman trained to be a healer, who is trying to buck tradition to become a hunter.

When the alien predator arrives on her people’s land, she’s the first to spot the signs that something isn’t right. The conflict unfolds on two fronts, as she comes to also battle French fur traders who are hunting buffalo to extinction. There’s a not-subtle parallel between these two interlopers: one from the stars, the other from Europe. To fight one is to fight the other.

Prey feels very unique in its commitment to the Comanche point of view. Though I expect those with more knowledge of the Comanche might find some fault with the portrayal, to me it was completely convincing. The movie helps us to see what was great in these human beings, viewed across the centuries.

As in every horror movie, you see in Prey the worst of humanity. But you also see the best, as Naru emerges as a hero to her people.

I’ve never seen a movie quite like Saloum. During a lean-and-mean 84 minutes, nothing feels wasted or extraneous as three mercenaries on the run confront an ancient supernatural force in Senagal’s Sine-Saloum region.

More than that, the cultural and historical references are entirely African, with no concession to Euro-American sensibilities; I found myself Googling through the middle of the film just to keep up. In doing so, I learned quite a lot about a part of the world I’ve never visited.

It’s also exciting to watch, and deeply troubling. As with another film on this list, You Won’t Be Alone, Saloum is about how traumatic events shape our world and personalities, and they share an intense visionary quality. But the tones and approaches of the two movies couldn’t be more different. While You Won’t Be Alone feels quietly contemplative, Saloum is all about fast, loud forward motion.

Chaka (Yann Gael), Rafa (Roger Sallah), and Minuit (Mentor Ba) are brothers, but not by blood. There’s one scene between them that especially moved me. Chaka does something deceptive that puts all three of them in danger. In an American movie, there would be recriminations. In this one, Rafa and Minuit instantly forgive Chaka and choose to share the burden of the pain that drove his actions.

It’s a moment that promises a way out for the three men, but there’s no place in a clear-headed story like Saloum for happy endings. If the conclusion is grim, that’s because Saloum knows that nothing good comes from violence. If it’s a better world we want, the story implies, then there’s no place for violence in creating it.

You Won’t Be Alone

In 19th-century Macedonia, a peasant mother and a witch named Old Maid Maria (Anamaria Marinca) strike a bargain for the mother to give up her baby, Nevena, when she grows to age 16. But the mother hides Nevena in a cave, hoping that the witch will never find her.

Nevena (played, as a teenager, by Sara Klimoska) grows up in total isolation. Maria finds her anyway, and turns Nevena into a witch who gains power by drinking blood. That’s the beginning of the story; from there, the movie goes to places few films can reach.

Meditative and visionary, You Won’t Be Alone is also a surprisingly urgent story about domestic violence, in all its varieties. In this movie, husbands beat their wives and mothers hurt daughters, as families become circles of abuse. If the story stopped there, I wouldn’t include it on this list—but there’s so much more to this film than horror and violence.

Nevena is an outsider and we see the natural and human worlds through her estranged eyes. This makes everything in the film seem strange and new, and many of the scenes will provoke genuine awe in viewers who are willing and able to enter Nevena’s point of view.

Nevena sees the worst in nature and humanity—but she also comes to see the very best in both. Against all odds, Nevena finds beauty, compassion, and love. In this regard, You Won’t Be Alone is the opposite of Hellbender. From the same kind of isolation that turns Hellbender’s Izzy into a monster, Nevena learns empathy. Whereas Hellbender twists the mother-daughter bond into something ugly, You Won’t Be Alone transforms ugliness into something beautiful and pure.