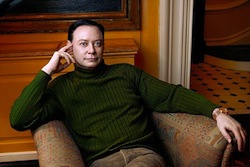 According to author and psychologist Andrew Solomon, these extreme cases reveal something fundamental about the parental condition. “Parenthood abruptly catapults us into a permanent relationship with a stranger, and the more alien the stranger, the stronger the whiff of negativity,” he writes in his new book, Far From the Tree: Parents, Children and the Search for Identity. How can parents see the world through the eyes of these strangers—and in doing so, love them for who they are, not who we wish them to be?

Solomon won the 2001 National Book Award for The Noonday Demon: An Atlas of Depression, and is a Lecturer in Psychiatry at Cornell University and Special Advisor on Lesbian, Gay, Bisexual, and Transgendered affairs to the Yale School of Medicine. For Far From the Tree, Solomon interviewed 250 families facing issues that range from schizophrenia and deafness to rape and transgendered identity. The book is about how parents can bridge differences with their children—but it’s also about how groups of people who seem very different from each other can use their own experiences to develop empathic connection and find common ground.

I sat down to interview Solomon at Berkeley’s Hillside Club, shortly before he gave a talk co-sponsored by the Greater Good Science Center.

Jeremy Adam Smith: Why did you write this book?

Andrew Solomon: Twenty years ago my editors at the New York Times asked me to write about the deaf on the grounds that I had done a lot of reporting about foreign cultures and this was a foreign culture in our midst.

I immediately saw parallels between the experiences of deaf people, with their claim on culture that was questioned by the outside world, and gay people, who had made a similar claim. And I found that most deaf children are born to hearing parents, and that most gay children are of course born to straight parents. I wrote a lot about the ways in which in exploring the deaf experience I found this resonance with my own experience as a gay man.

Then a few years later a friend of a friend of mine had a daughter who was a dwarf, and I heard her asking all the same kinds of questions that hearing parents of deaf children asked themselves: “Do I bring her up to be friends with other dwarfs? Do I tell her she’s just like everyone else, only she’s shorter? What is the approach supposed to be here?”

As I listened to that experience, I suddenly saw this recurring theme: this idea of parents who perceive themselves to be normal and children who perceive themselves to be different—and parents who don’t know how to deal with these children who are different. If it’s true in these categories, I thought, then it must be true in a lot of others, too. That’s the state of being I explore in Far from the Tree.

JAS: The research is staggering. You ultimately had 40,000 pages of interview transcripts, and you did background research into each of the issues the families faced, including autism, dwarfism, prodigial intelligence, and criminality. Why was it necessary to cast such a wide net? What were you trying to accomplish?

AS: I really felt like I had insights into each of the individual syndromes I wrote about, but my primary insight was the way they’re all the same.

But you can’t argue that difference is the one thing that unites us—that people dealing with schizophrenia, criminality, and genius are all going through similar experiences—unless you really establish yourself as an authority in each of those areas. You can’t just skate over the surface and say, “I met one family that had a child with schizophrenia and one family who had a transgendered child—and I decided their experiences were the same.” You have to be able to say, “I’ve really looked at these communities.” I needed all that research in order to make the argument that I wanted to make.

And in some measure, I needed all that research in order to discover the arguments I ultimately made. It seemed to me at the start that there were some similarities, but I didn’t know right away what the similarities were. I had to discover them through the research.

JAS: Even the unlucky reader will be affected by at most one of the issues you touch upon. What do they stand to gain from reading about all these other issues?

But if you look at the experiences that are common to families dealing with all of these kinds of difference—if you search for what all these experiences have in common—then you find yourself not in a weird, marginalized, lonely little group, but part of something that constitutes perhaps the majority of humanity: families that have a child who is strikingly different from the parents in some way.

But I have yet to meet anyone who hasn’t at some point looked at their child and said, “Where did you come from?” Parenthood can be very lonely. I’d like to think that if you find common cause with these people, you’d feel less alone. I would sometimes ask the people I interviewed: “Why did you agree to sit down and talk to me?” And they would answer: “I really felt like I had been so alone, and I thought that if I could tell my story, I would help people not feel as lonely as I did.”

JAS: What did you find were the qualities of parents who were able to survive and thrive in the face of their children’s difference?

AS: The most resilient people sought meaning in these experiences. They made a deliberate decision to construct meaning. At the beginning, people would say to me: “I found it so meaningful having a child with severe disabilities, I’m so glad I had this experience.” And I thought that it sounded artificial and foolish to me.

But as time went on and I spent more time with these families, I changed my mind. All of us have children who are in some measure flawed, and we love our flawed children with their flaws. We might want to help them to be less flawed, but we certainly don’t want to exchange them for other children.

I also realized that one has to make a choice. You can look at an experience like this and say, “I wish I had had a different life”—and spend the rest of your existence regretting the life that you had. Or you can decide that you’re going to find what is meaningful in your life. I think the construction of meaning takes a while. Parents have to have both love and acceptance—two things that don’t always go hand in hand. The construction of meaning is something that can be undertaken quite consciously and quite deliberately. Some people say that God had a greater purpose for them. Some people say it has nothing to do with God, but I’m going to find a greater purpose.

And there’s no question that while this may not be the way in which you would have chosen to grow, that these experiences cause people to grow. Many people said, “I now feel much more deeply about life, about love, about myself, about others—than I ever would have if I didn’t face these challenges.” If they didn’t do that, it made it much harder for them to parent their children. Having an embittered relationship to your own life—even if it’s fully justified, and the completely reasonable, rational response—is toxic. It makes it hard to live your own life and it makes it hard to take care of your child, which you need to do.

JAS: You devote a section to families with children who became criminals. I’m curious if you found parents dealt with criminality—which most people see as a question of behavior instead of identity—differently than those with mental or physical disabilities.

There are some criminals who come from homes in which they were hideously abused or exposed to criminality, but a lot of them come from homes with very nice parents who appear not to have committed any crimes and who are quite distressed that their children are doing this. And as I spent time with these families I came to feel that criminality is more like an illness than some of the illnesses I was writing about. You have this child, you’ve done your very best, you’ve done things pretty well, and this child behaves in this strange way.

It’s a lot like autism in that regard—there’s a child who is doing things that are alien and inexplicable to you, and you can’t figure out what to do about them. A lot of the families I met really wanted to bring about a change, and a lot of them of course felt guilty or implicated because they felt they had somehow caused this. A lot of them felt angry, because they felt their child should be able to control it. But I ended up feeling that many of the children didn’t have much more control over their aberrant behavior than autistic people do.

JAS: What about the relationship with the rest of the world? Many of these situations come with a lot of stigmatization and marginalization—how did families negotiate that?

AS: The stigma is diluted by a sense of community. At the request of people in the book, I created a website, farfromthetree.com, which is a place where people can tell their stories and interact with others. I think the thing that makes people feel most self-assured in the face of stigma is interacting with people who are dealing with stigma. When you build a community of people who are dealing with the stigma together, then you can get a civil rights movement going.

There’s the stigma and marginalization, and there’s also the fact that people with these conditions mostly are supposed to have access to a lot of services that are very difficult to obtain, and require a lot of know-how and wherewithal to extract from the apparatus of government. There’s a lot of managing of these conditions and managing the care that one should be getting.

JAS: What cultural or political changes could serve to de-marginalize and de-stigmatize the families?

AS: I really think that if we can get all these families to all work together, to recognize this commonality of interest, then they are a large force that could really militate for social change and recognition. I think we need to have much better services for people dealing with these things. I think we need to get rid of the shame and blame game.

But we also need to see a capacity for accepting that identity is a fluid idea. Something that constituted an illness when I was growing up, like homosexuality, now constitutes an identity. Things that are currently illnesses might come to be seen as identities down the road. Many people living with conditions that we on the outside would hate to live with actually feel a sense of purpose or belonging or pride in their experiencs—and this, perhaps more than many medical interventions, helps them to flourish.

When I became an adult, I understand more of what my parents have done to me just to give what’s best for me. Sometimes, I despise them because I couldn’t understand them. But now, I am very thankful that I have loving parents.