In December, in the wake of the shootings at Sandy Hook Elementary School, we created a list of resources for helping children cope with trauma. We had hoped that we would not have to feature that list again anytime soon.

Sadly, a number of these resources are newly relevant after yesterday’s explosions at the Boston Marathon, including the resources from the National Child Traumatic Stress Network (NCTSN) to help children make sense of traumatic events, these tips from the National Association for School Psychologists, and Educators for Social Responsibility’s excellent guide to “Talking with Children about War and Violence in the World.” We recommend parents, educators, and anyone who works with kids to review them for their children’s—and their own—well-being. 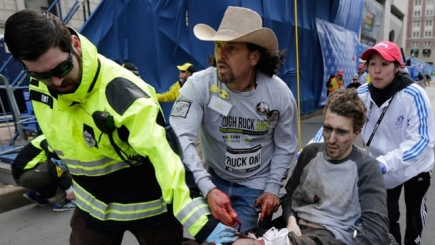 Carlos Arredondo, a bystander at the Boston Marathon who rushed to the aid of victims after the explosions. © Charles Krupa/AP Photos

Of course, children are not the only ones affected by the terrible events in Boston; for people of all ages, the bombing may raise concerns about congregating at large public events or in prominent public places. While the Newtown tragedy focused attention on school safety and gun control, yesterday’s events may evoke more general fears and anxieties about everyday terrorism.

Obviously, these fears are stoked by the extensive media coverage of the bombing. Indeed, one significant difference between yesterday’s events and many other traumas that preceded it is the sheer volume of photos and videos documenting the horror. The bombing, after all, took place at a major public celebration, the kind where iPhones and other cameras are ubiquitous in the hands of the press, spectators, even the participants themselves. Just moments before the explosions, many lenses were trained on the exact location where the bombs went off.

As a result, we were almost immediately flooded with images of chaos and carnage. Many first-hand accounts of the scene described it as a “war zone.” While most Americans have been spared the trauma of finding ourselves thrust into such a scene, a quick search on YouTube can now give an all-too-real feeling of what it’s like for an American oasis to be transformed into a war zone—and raise the distressing thought that it’s possible for our own lives to intersect with such senseless violence. We saw similar images on 9/11, to be sure, but 9/11 was years before smart phones, years before Twitter, YouTube, and Facebook, years before many people even had digital cameras.

“[Boston] was such a graphic attack, and then there were so many cameras there to capture the graphic attack,” says J. Brian Houston, an assistant professor in the department of communication at the University of Missouri, where he co-directs the Terrorism and Disaster Center. “In this country, I can’t remember anything like it.”

When the professional news media cover similar attacks, adds Houston, they often shield the public from the most horrific images. But since so many of the images from Boston were capture by non-professionals, who can distribute them through social media or other online platforms, viewers’ exposure to the horror will be practically unfiltered.

Research has documented real costs to this kind of exposure. A few years ago, Houston himself analyzed the results of 23 prior studies on the effects of media coverage of terrorism, particularly the 9/11 attacks. He found a significant link between media exposure and symptoms of PTSD. This link was strongest among children and, counter-intuitively, people who lived further from the attacks, perhaps because more of their experience of the event came directly from the media. For adults and kids alike, this could mean heightened risk of anxiety, depression, problems sleeping or eating, and, for kids, regression to younger developmental behavior, like by clinging more to their parents. (Much of the research on how the media’s coverage of traumatic events impacts the public has been helpfully summarized by the Dart Center for Journalism and Trauma.)

So what should we do in the face of all this coverage? Houston and other experts have identified some effective strategies, many of which have been highlighted by his Terrorism and Disaster Center (formerly based at the University of Oklahoma), which works to promote recovery and resilience among children, families, and communities affected by disaster. Here are some of the top tips.

Limit your exposure—and your kids’. Houston recognizes that this can be easier said than done. “We want to understand what happened,” he says. “But at a certain point, we’re watching the same images over and over again. For adults, you have to take a break and disengage.”

For younger children, Houston recommends restricting as much as possible. A fact sheet he and his colleagues compiled for parents suggests this is a sound strategy for kids younger than eight. But he acknowledges that completely restricting access may not be possible for older kids, especially since they’re often online more than their parents—which motivates the next tip.

Find out what kids know. With his own kids, ages seven and 10, Houston has been surprised in the past by how much they’ve heard about certain tragedies, though the information is not always accurate. “Asking them what they’ve heard and what they know allows me to get a sense of what I need to talk with them about,” he says.

In general, kids have a harder time making sense of trauma and disasters. Through his research, Houston found that after 9/11, many kids thought that hundreds of buildings in New York had fallen down because they saw the collapse of the World Trade Center replayed so many times. So asking kids what they know also allows parents to clarify misconceptions.

“It’s easy for kids to have little bits of the truth, then extrapolate from there, often very wildly,” he says. “So if you can clarify misconceptions, answer questions, you can root them a little better in reality—which is bad enough, but sometimes their imaginations are much worse.”

Remind kids—and yourself—of the good in the world. Blood and explosions might make for more sensational video, but they should not overshadow the countless acts of kindness and heroism that often follow a disaster. Such goodness was clearly on display in Boston, with videos showing first responders running toward the explosion sites even as the crowd was running away, and stories emerging of civilian bystanders like Carlos Arredondo who rushed in to help people in need.

It’s easy to think that stories like these are the exception, but we hear about them time and again after tragedies—a fact my colleague Jeremy Adam Smith pointed out in his December article about the reminders of human strength and goodness we saw after Sandy Hook. Indeed, research by sociologist Lee Clarke has found that “people rarely respond to disaster with extreme panic, recklessness, and selfishness”; instead, they help each other. This, of course, echoes a finding that is fundamental to our work here at the Greater Good Science Center: that the human propensity for compassion is a real, deep, and even defining part of our nature.

In her excellent post yesterday on Scientific American, Melanie Tannenbaum points out all the reasons why, according to social psychology, people at the marathon should have been disinclined to help—and yet they helped anyway. “Even when everything around us ... combines in perfect synchrony to create the exact blend of factors that should push anyone away from helping,” she writes, “we can’t underestimate the power of that drive within us all that doesn’t care about what the textbook says and pushes us towards doing good anyway.”

Tannenbaum reminds us of the old quote from Fred “Mister” Rogers that has, for tragic reasons, become quite timely over the past few months:

When I was a boy and I would see scary things in the news, my mother would say to me, “Look for the helpers. You will always find people who are helping.” To this day, especially in times of disaster, I remember my mother’s words and I am always comforted by realizing that there are still so many helpers — so many caring people in this world.

Identify ways you can take action and help. Terrorist attacks and other acts of violence can make us feel powerless and see the world as evil, says Houston. One of the hardest things for us psychologically about an attack like the one in Boston is that we don’t have any explanation for it—we don’t know the perpetrators, the motive, anything. The excess of images combined with a dearth of explanations “might be very distressing for adults and children,” he says.

An empowering response is to find ways we can help other people. This could mean doing something to benefit victims in Boston, like giving blood or making a donation to the Red Cross. But even lending a hand to someone in your own community could improve your mental health, says Houston, by reaffirming your own efficacy and your ability to make a positive impact on the world. A great deal of research backs this up, as Meredith Maran has reported in her Greater Good article on the “activism cure.”

While yesterday’s events were terrifying and heartbreaking, and the resulting images can feel overwhelming, the work by Houston and other researchers shows how it’s possible for adults and kids alike to respond with resilience. For more tips, I suggest reading: