Fred McFeely Rogers was a shy, somewhat awkward, and sometimes bullied child growing up in the 1930s. After going to college for what he called his “first language”—music—he prepared to enter seminary and study for the ministry. But on a visit home for Easter, he saw television for the first time. He hated it—people on the program were throwing pies in each other’s faces, and Fred found that demeaning. Nonetheless, he sensed instantly television’s capacity for connection and enrichment. That moment changed his life—and the lives of millions of Americans. 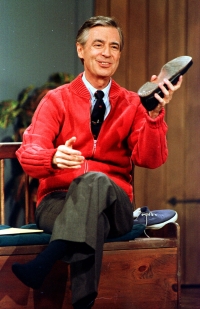 Fred Rogers, of course, went on to create Mister Rogers’ Neighborhood, which aired nationally for over 30 years. Beginning in 1968 and continuing until (and beyond) the end of production in 2001, untold millions of children grew up under Mister Rogers’ steady gaze and faithful care. Those children now make up much of the American public, and now many of them are flocking to theaters to see the documentary of Misters Rogers’ life, Won’t You Be My Neighbor?

Somehow, over 15 years after his death, we seem unable to stop turning back to Mister Rogers again and again—with a feature film that will begin filming in Pittsburgh this fall, and a biography that will be released in September. It seems we sense that Mister Rogers, whom we used to know so well, who used to seem to know us so well, may have something to say to us in our divided, contentious, often-painful cultural and political climate. Here are some of Mister Rogers’ teachings that could help us weather today’s ups and downs, stand up for what we believe in, and come together across our differences.

1. It’s okay to feel whatever it is that we feel

From 1955 to 1961, Fred Rogers was puppeteer and organist for The Children’s Corner, a popular, live, local Pittsburgh show that he co-created with Josie Carey. During his years on that show, Fred often spent his lunch hour taking classes—first at Pittsburgh Theological Seminary (then called Western Theological Seminary) and later at the University of Pittsburgh, where he studied child development. It was through his studies that he met child psychologist Dr. Margaret McFarland, a member of the Pitt medical school faculty.

Margaret and Fred became good friends, and Margaret worked as chief psychological consultant for Mister Rogers’ Neighborhood from the time it began until her death in 1988. It was Margaret who helped Fred get in touch with his own childhood memories, who helped him anchor the scripts, songs, and set of Mister Rogers’ Neighborhood in child development theory, and who said to him repeatedly, “Anything human is mentionable, and anything mentionable is manageable.”

In other words, whatever we feel, it’s okay to feel it—even if our feelings seem chaotic and complex. And naming our feelings, speaking them out loud, and exploring them with those we love are all good ways, as Mister Rogers might say, of growing on the inside.

2. But our feelings aren’t an excuse for bad behavior 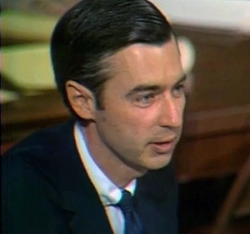 Mister Rogers speaks before a U.S. Senate Commerce Committee hearing in support of public broadcasting on May 1, 1969.

The famous video of Mister Rogers’ 1969 testimony before a Senate subcommittee shows up on my social media feeds every time government funding for PBS or NPR is threatened. But while my friends and I are busy trying to score political points, it’s easy to miss the substance of the testimony itself.

The young Fred, just a year into the national run of Mister Rogers’ Neighborhood, doesn’t talk, as I once assumed, about ensuring that educational television is equally available in all zip codes. He sits calmly, speaks slowly, and talks about feelings.

Specifically, he talks about anger. He quotes, at length, his song, “What Do You Do with the Mad That You Feel?” which gives suggestions for how to channel anger: “punch a bag,” “pound some clay or some dough,” “round up friends for a game of tag.” His favorite part of the song, it seems, talks about what he calls the “good feeling of control”:

It’s great to be able to stop when you’ve planned a thing that’s wrong,
and be able to do something else instead and think this song:

Mister Rogers and his Neighborhood constantly affirmed the coexistence of self-expression and respect for self and others, and this was in no way a passing interest—the song that Fred quoted in his Senate testimony appeared in 38 episodes of Mister Rogers’ Neighborhood, including an episode filmed 30 years later, in 1999.

When Fred was asked in an interview toward the end of his career about television’s responsibility to children, he replied, “To give them everything that we possibly can to help them grow in healthy ways, and to help them to recognize that they can be angry and not have to hurt themselves or anybody else, that they can have the full range of feelings and express them in very healthy, positive ways.”

3. Other people are different from us—and just as complex as we are

In a time when people on the left and the right dread family holidays with each other in equal measure, we’re hyperaware of differences between people. Our media diets, our social media feeds, and even our in-person relationships lock us into silos of agreement, where it’s easy to demonize and oversimplify those with whom we disagree.

In another song sung frequently on the Neighborhood, he reminded his television neighbors,

4. It’s our responsibility to care for the most vulnerable

Mister Rogers was as gentle and loving in real life as on screen, but he also had an iron will and perfectionistic standards, and he kindly and firmly demanded excellence from himself and from all who worked with and on behalf of children.

Fred Rogers built his life and work on a bedrock of conviction. Though he studied and appreciated many religious traditions, he was, at his center, a Christian deeply committed to the values he read in Christian scripture. He believed in—and worked every day to emulate—a Jesus who welcomes children, loves us just the way we are, and calls us to love self and neighbor.

An ordained Presbyterian minister with a one-of-a-kind charge to minister to children and families through the mass media, Fred took seriously the scripture mandate to care for the most vulnerable. He worked with prisons to create child-friendly spaces for family visitation, sat on hospital boards to minimize trauma in children’s health care, visited people who were sick or dying, and wrote countless letters to the lonely.

In a 1991 speech to the Association of Family and Conciliation Courts, an organization of lawyers, judges, educators, and counselors whose work included arbitration of custody disputes, he said, “The problem is that when we deal with a group of people—one or more of whom is a child—we just can’t be impartial. None of us who have anything to do with families with young children can.”

5. We can work to make a difference right where we are 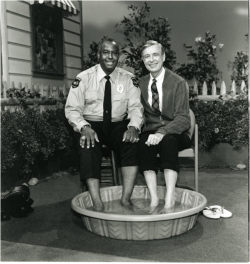 As Michael G. Long points out in his book, Peaceful Neighbor: Discovering the Countercultural Mister Rogers, Fred’s work for the greater good did not take the form of marching, rallying, or picketing. He occasionally wrote a note to a member of Congress, and of course he testified before that Senate subcommittee.

More often, however, Fred did his work in and through his own context. Fred didn’t march against Jim Crow; he cast black actors on his program. He didn’t travel to Birmingham or Selma in support of integration; he set up a pool and invited Officer Clemmons (played by black, gay actor François Clemmons) to soak his feet and share his towel.

Marching, writing, calling, and organizing are all good ways to make change, but Fred’s life reminds us that we can work for the well-being of the most vulnerable wherever we may be, in whatever work we do. In other words, “There are many ways to say ‘I love you.’”

6. It’s important to make time to care for ourselves

Fred was a vegetarian, he didn’t smoke, and he rarely drank alcohol. When he traveled, whether for business or pleasure, he never changed his watch—or his personal schedule—to local time. Wherever he was, he began each morning with prayer and Bible study, followed by lap swimming at the local athletic club. Swimming, as Mister Rogers sometimes shared with his television neighbors, was a way he could express emotion, especially anger. What he didn’t tell his television neighbors was that he often stood beside the pool and sang a quiet hymn before diving in. Fred also made time, almost every day, to sit and play the piano.

Fred spent his life giving of himself—on screen and off, to those he knew very well and those he met only in passing or in the pages of a letter. But he could only do so because he was absolutely committed to doing what he needed to take care of himself. Making time for self-sustenance meant he had more to give away.

“Neighbor” is biblical language, which Fred knew well. The Hebrew Bible instructs God’s people to “love your neighbor as you love yourself” (Lev. 19:18), and in the New Testament, Jesus discusses this commandment with a legal expert who is trying to lay a conversational trap for him (Luke 10:25-37).

“And who is my neighbor?” the scholar asks, like a sly Thanksgiving table guest or a social media troll.

In the story, a man is beaten by thieves and left to die. A priest—a powerful man, both religiously and politically—approaches, sees the injured man, and crosses to the other side of the road to avoid helping. Another religious leader does the same. Finally, someone else comes down the road, someone who is the wrong class or the wrong color, a member of a despised group. He is on a journey, but he stops. He is “moved with compassion” and tends the injured man, takes him to an inn, and pays for his lodging and care.

“What do you think?” Jesus asks his tricky interlocutor. “Which one of these three was a neighbor?”

And though perhaps he can’t believe he is saying so, the scholar answers, “The one who demonstrated mercy toward him.”

When Mister Rogers called us neighbors, when he hosted us in his own Neighborhood for over 30 years, he was calling us—gently but firmly—out of our structures of power and our silos of sameness, into lives of mercy and care for one another.

Admittedly, maybe he was overly optimistic. Maybe he was calling us something better than we actually were. But maybe he believed that if he got to us while we were young, if he told us, again and again, that we were good, that we were lovable, and that we could extend mercy, maybe we could grow into real neighbors to one another.

Maybe we still can.