During the last presidential election season, I visited a dear friend. In her front yard, I saw a sign for a candidate whom I vehemently opposed. 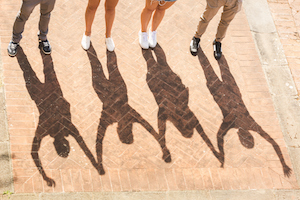 “Are you kidding me?” I thought, in a moment of disbelief. I knew my political views were different from those of my friend, and I have also known her for over ten years as a kind, generous, salt-of-the-Earth kind of person.

You might be wondering which candidate it was, but that’s not the point of this story. The point is about my attitude: While that sign wasn’t the end of our friendship, a similar sign on a stranger’s lawn might have deterred me from wanting to get to know them, and that’s concerning.

I’m not alone, for this is a time of intense political partisanship. One new study from Stanford University even found that most Americans now identify more with their political parties than their religion or ethnicity—a mindset that, if unchecked, can breed hostility and discrimination.

As a parent, I don’t want to model this kind of dismissive thinking for my child, and thus contribute to an even more polarized future. So, how do we avoid programming children to think badly of people they’ve never met? How can we help them to keep open hearts, in part so that they can make up their own minds about the issues they’re going to face as citizens, as they grow?

Recent research points to some clues.

1. Use specific, individualizing language, not generalizations

In a recent study, Marjorie Rhodes and colleagues aimed to find out how subtle language might be linked to essentialism—a kind of bias that leads people to believe that categories (like Democrat or Republican) reflect something deep and immutable about their members.

How did the researchers study this bias? They read picture books about an unfamiliar, made-up category of creatures—“Zarpies”—to four to six year olds under varied circumstances, using either generic or specific language. They found that generic language—“Look at this Zarpie! Zarpies climb fences”—led kids to be biased and more likely to give fewer stickers or toy boats to Zarpies. Using language that highlighted individual differences—“This Zarpie climbs fences”—reduced bias. What’s more, another study suggests that some adults have a higher tendency toward this kind of bias, which is linked to more support for public policy that serves to makes some groups distinct from others.

How can you guard against unintentionally fostering anti-Zarpie bias in your kids? By using specific, individualizing language. Generalizations may lead kids to view people from one group in all the same way, as fundamentally different from them. Rather than use language that sharpens an understanding of themselves as essentially different from those in other groups, parents can highlight the idiosyncratic traits that make them human.

For example, if you disagree with something a single political figure says, then you may point out to your kids that this view is that of one person, and may not represent everyone who belongs to that political party. Replacing broad-brush language with words that highlight finer details can help kids to perceive diversity within a group.

You should also reconsider the jokes you tell. Research suggests that disparaging humor about whole groups of people can help to normalize discrimination against them—and also fuels a sense of alienation from each other. The alternative? “Perhaps humor could help conservatives and liberals make light of the things that divide them in ways that don’t threaten or insult either,” says psychologist Thomas Ford. For example, you might make fun of your own stereotypes of other people, or make jokes that highlight what people have in common.

A 1996 research review by GGSC co-founder Dacher Keltner and Robert Robinson described how partisans tend to paint their opponents as more extreme than they actually are—and so not appreciate how much common ground there is between them. Keltner and Robinson also found that partisans believed they had less extreme attitudes than their opponents, or even members of their own groups.

“Extremists emerge as representatives because individuals assume extremism is representative, and protective, of their values and preferences,” they write. In other words, people tend to think of themselves as reasonable and others as fanatical.

Being aware of that natural bias can help us to counter it when talking with our kids. Extremism exists, of course, but it doesn’t necessarily define everyone who shares the same political party. Instead of giving in to that tendency—and responding in kind—you can challenge your kids to investigate what people on the other side really believe and want. Perhaps, in the process, they’ll discover some commonalities.

3. Check whether your body language matches your intentions

According to a recent paper by Eric Walle and colleagues, kids actively seek out, notice, and use others’ communication of their feelings about a new or ambiguous situation—their emotional judgment—to understand better and decide how they should react.

This ability, called social referencing, starts as early as infancy. Classic studies of social referencing involved moms looking toward their babies, who were on the other side of a Plexiglas-covered surface, with different facial expressions. The covered surface was a “visual cliff” that looked like it was a four-foot drop. As you might expect, babies didn’t crawl “over the cliff” if they saw that their moms had fearful facial expressions and they were more likely to crawl over if they saw their moms smiling. We engage in social referencing throughout our lives, whenever we encounter a new and ambiguous situation.

What does that have to do with political prejudice? Try to cultivate the awareness of your kids watching your non-verbal communication when you talk about politics. Kids are sensitive to subtle gestures and facial expressions that parents have in response to political contexts, including people of other political parties. For example, if a neighbor has political views that are different from yours, kids may look toward you for a clue to gauge whether they should maintain or end relationships with the kids next door. (My colleague Amy Eva describes these self-distancing techniques, which can help you see yourself from the outside.)

4. Remind kids of their choices of social groups with positive missions

Members of diverse societies disagree about values, note Melanie Killen and Maykel Verkuyten in a 2017 paper—and in that kind of environment, tolerance is a valuable skill.

With tolerance, “you accept what you object to”; with intolerance, “you reject what you object to.” Tolerance is not an easy feat for kids to learn because they have to be able to disapprove and accept something at the same time. It’s harder for older kids to be tolerant than younger ones because adolescents are always measuring people against each other, thinking about how attitudes and behaviors stack up against existing groups and societal expectations.

Of course, the groups we choose do matter. When kids join peer groups that value helping, sharing, and otherwise acting in positive ways toward others, kids understand their identity in this way and that defines how they will think about and relate to others within and outside their groups. That’s how group membership can contribute to “a more just, fair, and equal society,” write Killen and Verkuyten.

Older kids need to hear that message. Parents may encourage them to join or start school clubs or service groups that endorse positive social group identities. Being a part of these kinds of groups not only helps motivate kids to consider reaching across their own peer group, but also invest in understanding the perspectives and values of others, particularly if they are different from their own.

To begin a perspective-taking discussion, parents can ask, “Why do you think they said or did or believe that?” This may challenge kids to move beyond a tendency to settle into a dismissive stance of an opposing side, and begin to think critically about an issue. Engaging in a deeper conversation about empathy—with an emphasis on understanding the feelings behind political behavior—could be a way to foster broad-mindedness and potentially explore tolerance.

5. Talk about when it’s time to take a stand

There are limits to tolerance, and we each draw the line in different places. You can discuss with your kids where to draw that line: Is it OK to denigrate others? How do we respond to people who talk openly about killing other people because of their identity? What if they see classmates bully kids for their religion or sexual orientation—what will they do? This kind of discussion helps prepare kids for what they could do if they come across intolerable words or actions. It’s good to cultivate tolerance, but kids also need tools to stand up to hate, bullying, or even violence.

Our kids will see politicians speak and act in ways that are contrary to a commitment to the greater good—espousing bigotry, inciting violence, failing to condemn cruelty. We have a responsibility to call out repulsive views and have a conversation with our kids about their consequences to people’s lives. Talk about what you value with your kids and the reasons you hold these values. Engage them to find out what they know about these values and how you, as a family, show they are important. Research suggests “children learn to become socially conscious citizens by watching and modeling their own parents’ civic beliefs and practices.”

Taken together, these suggestions of watching your own words and body language can feel like a tall order. But mindfulness can help, by helping you see your own intentions and increasing your self-awareness. Indeed, more and more research shows that mindfulness—which you can cultivate through practices like breathing and loving-kindness meditations—reduces psychological biases of all kinds. If you don’t meditate, consider doing it with your kids!

My friend and I will probably keep needing to engage in some Cirque du Soleil-style acrobatic perspective-taking on some political issues. It’s a tough balance, holding on to your beliefs while opening your heart to people with different beliefs. I’ll keep trying, and I hope you will, too.