On Saturday I joined about 1,000 other people in San Francisco to explore what makes me human. I don’t know that I had a better grasp on my humanity by the end of the day than I had at the start of it, but I certainly enjoyed some stimulating discussion in between.

The occasion for all this soul searching was the inaugural “Being Human” event, which its organizers (it was sponsored by the Bauman Foundation) billed as a gathering “designed to catalyze public conversation around new revelations in the sciences that are redefining the experience of being human.” The day consisted mainly of talks and panels (with a short film and some poetry included for reflection and palate cleansing, but more on that later). For a peek at some real-time highlights from the event, you can check the updates I and others posted to Twitter; if you have more time, you can watch video of the full day. 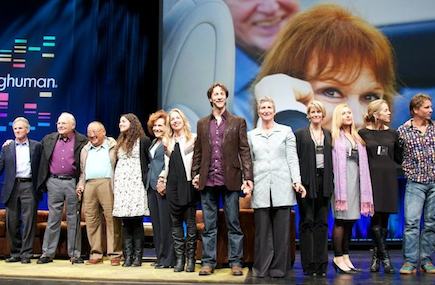 Some of the speakers who participated in Saturday's Being Human event.

The sessions at Being Human didn’t exactly cover the full range of human experience, but they made a valiant effort to come as close as you can in roughly seven hours of conversation. The focus extended from the nature of individual perception to the influences of cultural institutions; along the way, the day centered on questions familiar to any freshman philosophy student: What is the Self? How do we distinguish between our Self and other people? Do we actually have control over our moral decisions—are they driven by genes or our environment, the conscious or unconscious brain?

But what distinguished this discussion from a 3am dorm room chat was that it involved scientists who’ve devoted their careers to uncovering empirical answers to these big questions. Not surprisingly, given the thrust of the day, many of these speakers hailed from the field of neuroscience, starting with Richie Davidson, the University of Wisconsin neuroscientist and pioneer in the scientific study of compassion, who served as the host and moderator for three of the day’s four sessions (he was a participant in the fourth).

Also on the roster was David Eagleman, the founder and director of Baylor College of Medicine’s Initiative on Neuroscience and Law, and something of a rock star in brain research. Eagleman shed light on the neural bases of decision making, zeroing in on how our unconscious brain often drives our decisions. The results are often quite amusing, and perhaps alarming: People named “Dennis” and “Denise” are more likely to become dentists; we’re more likely to marry someone whose first name begins with the same letter as our own; people are more likely to describe their mothers in affectionate terms when they’re holding a cup of hot tea than when they’re holding iced tea. 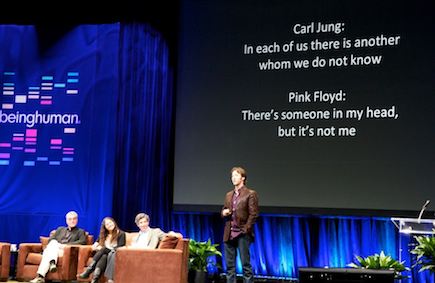 Most of our actions and decisions are driven by our unconscious, says Eagleman—“The conscious is like the broom closet in the mansion of the brain,” he said—but that’s not a bad thing. In fact, it’s necessary for our survival—a point echoed by Jon Kabat-Zinn in the final session of the day, when he noted that we’re not consciously responsible for our own breathing.

“If it were up to you to be breathing,” he said, “you would have died a long time ago—whoops, forgot.”

To borrow another metaphor from Eagleman: The conscious brain is like a CEO; once it starts to interfere with decisions and actions better left to the unconscious, it usually “mucks things up.”

Another highlight of the day was a droll and provocative talk on sensory experience by neuroscientist V.S. Ramachandran. Ramachandran’s focus on two seemingly unrelated phenomenon—phantom limbs and mirror neurons—served to illuminate the deep roots of human empathy.

Mirror neurons are probably well familiar to many readers of Greater Good by now: They’re cells in the brain, first documented in monkeys but also observed in humans, that fire when we observe the actions of someone else, activating in regions of the brain associated with the action that other person is performing. In other words, they make our brains act as if we ourselves were experiencing whatever that other person is experiencing. The connection to empathy seems pretty clear.

But less clear might be how phantom limbs can shine light on our connections to others. People are said to have a “phantom limb” when they still feel sensations from a body part that they’ve lost, like an amputated arm. Experiments have shown, says Ramachandran, that people with a phantom limb have a strong propensity to experience others’ pain as their own.

How could that be? Ramachandran explains that when most of us see someone get hurt, mirror neurons in our brains fire in such a way to suggest that we ourselves are experiencing their pain. But our skin knows better: It doesn’t send any signal of being hurt (because it’s not), and it serves to “veto” the signal sent by the mirror neurons.

“My skin is saying: Look, I know those neurons are saying ‘ouch,’ but there’s nothing happening in the skin—so shut up,” he told the crowd.

But when people are missing a limb, there’s no skin to veto the brain’s signal and indicate that the pain’s not real. So when people with a phantom limb observe someone else getting hurt (like by getting pricked in the finger), they feel and react as if they themselves have been hurt—they say “ouch” and pull back their hand.

“The extraordinary implication of this is that my brain is hooked up to your brain directly,” he says. “The only thing that separates your sensory experience from mine is your bloody skin.”

Indeed, the theme of interconnection ran through much of Being Human—perhaps best illustrated by Tiffany Shlain’s short film A Declaration of Interdependence, which Shlain presented in the middle of the day. Check it out:

The film grew out of Shlain’s last feature-length documentary, Connected, and is part of a series of 20 short films she’s producing called Let It Ripple: Mobile Films for Global Change, which will cover topics central to our work here at Greater Good, such as empathy and power. Her next feature-length project, Brain Power, will explore the parallels between the development of the Internet and the development of the human brain.

What was particularly nice about the screening of Shlain’s film was that it provided perhaps the day’s clearest reminder that being human is largely about being connected to others—an idea sometimes obscured by discussions of the brain and individual consciousness.

Of course, there’s something obviously paradoxical about trying to understand what it means to be human by sitting in a chair and listening to other people talk about science for a full day. Likely recognizing that fact, the organizers had the poet Jane Hirshfield twice reflect on the proceedings and read some of her work.

Still, the day was dominated by neuroscience—and really just a thin slice of what neuroscience has told us to date about human experience. Music, dance, death, love—there wasn’t really time for that on Saturday.

Yet Being Human’s organizers saw the day as the launch of a broader conversation, not the last word on anything—hence their reference to the event as a “catalyst,” and Bauman Foundation executive director Jeff Klein’s exhortation at the end of the day to return for Being Human 2013. Before then, the Bauman Foundation will launch an online magazine this summer, where they’ll continue the conversation from Saturday.

And over the next few days, we’ll be featuring some of the speakers from the event, discussing the nexus between Being Human and promoting the Greater Good. Stay tuned.