In the last 20 years, neuroscience research has transformed humans’ understanding of ourselves. No longer do scientists believe that the brain is fixed in adulthood, for instance—we now know that it can grow new cells and neural pathways throughout our lifespan, suggesting that we have more power to shape how our brains develop than was previously thought.

The Tell-Tale Brain by V.S. Ramachandran is an attempt to help non-scientists make sense of some of these startling and provocative discoveries. Ramachandran, a neuroscientist at the University of California, San Diego, has spent the last 25 years uncovering “the mysterious connections between brain, mind, and body,” primarily through his studies with patients who suffer from genetic quirks, unusual syndromes, or brain damage. 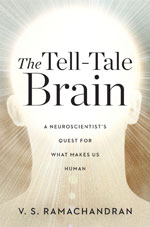 For example, Ramachandran has studied patients with synesthesia—a condition in which sensory experience is blended in odd ways, like seeing colors whenever one hears music. By listening carefully to his patients’ stories and conducting often ingenious experiments, Ramachandran has made some ground-breaking discoveries into how the human brain processes sensory stimuli and how that process can be disrupted in certain people.

Much of the book follows a pattern that will be familiar to fans of Oliver Sacks: Ramachandran introduces us to an unusual syndrome, like phantom limb pain in amputees, and lets us see how it reveals some deeper insight into the workings of the brain. Beyond walking us through some compelling detective stories, Ramachandran aims to evoke an appreciation from his readers of how far our brain has evolved from that of our ape cousins.

According to Ramachandran, our brain’s extraordinary ability to learn and integrate new information may be due in large part to mirror neurons—cells that fire both when we perform a particular action and when we witness someone else performing the same action. These brain cells were discovered in the 1990s and have since been implicated in our human capacity for empathy, language, and culture.

Although much of this connection is speculative, Ramachandran capably explains why mirror neurons might have played an important role in helping humans make leaps of evolutionary development. Though other primates can laugh, communicate, imitate, and display empathy, only humans are capable of humor, complex language, abstract thought, and, perhaps most important of all, self-awareness. In relaying these and other insights into how our brains function, Ramanchandran provides a convincing account of what sets humans apart from other species.

Oh my! There’s just a little anthropocentrism on display here, isn’t there? I love it when humans compose paeans to themselves about how superior they are to all other living creatures. It feels so good to be the master race, doesn’t it? And it makes it so much easier to erase the guilt that might flow from exploiting other creatures when we can look down our noses at them while doing so.

“[O]nly humans are capable of humor, complex language, abstract thought, and, perhaps most important of all, self-awareness.” Self-awareness, or narcissism? If we were even half as aware as we like to think we are, we would have noticed the possible existence of these qualities in several other creatures besides ourselves, and - more importantly - acknowledged our inability to even begin to evaluate, let alone judge, the level of consciousness of other life forms.

Who on earth do we think we are to assert definitively that baleen whales or dolphins, to take but two, obvious examples, are not capable of using complex language, thinking abstract thoughts, or being self-aware? We have no bloody clue what they’re doing, but we don’t hesitate to replace our ignorance with arrogant self-aggrandizement, do we?

The myth of human superiority is no more grounded in reality than the myth of American exceptionalism, but it is even more dangerous. It will be exposed for what it is when we have finished destroying the ecosystem, and all the supposedly inferior creatures (if any are left) ask us what the hell we were thinking. Now there’s an abstract thought to wrap your self-aware mind around if ever there was one.