What can science tell us about morality?

While the slippery and subjective nature of morality makes it a troubling specimen, it remains a crucial part of our lives—and therefore a topic ripe for scientific research. 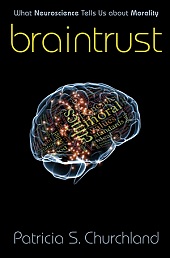 However, scientists are skilled at describing what is—the circumstances under which people are more likely to lie, for instance—which is not the same as describing how we ought to live our lives, like when it’s OK to lie. So it’s not entirely clear what scientists can offer here without overstepping their bounds.

Yet in Braintrust: What Neuroscience Tells Us about Morality, Patricia Churchland carefully leads the reader through scientific findings with implications for morality and ethics, well aware of the pitfalls and rewards she may encounter along the way. Churchland, a professor of philosophy at the University of California, San Diego, quickly informs the reader that science cannot tell us what we ought to do to be moral, but that a review of findings from psychology and biology may explain how or why we do it. Her goal is to draw on these findings to build an objective framework in which to understand human morality.

Churchland argues that, deep in our evolutionary history, our early biological systems for self-preservation evolved to promote concern for others, as natural selection favored mammals that could better care for their offspring.

From here, she goes on to explain how basic biological systems—such as our brain’s systems for pain, pleasure, and learning—have interacted with more recent biological developments, such as neurochemicals like oxytocin, to expand our circle of concern beyond the self. Caring for kin and kith, for instance, induces feelings of pleasure and reward, making us more likely to value others’ well-being.

Churchland explains that the capacity to care for others allowed for trust, cooperation, and other kind, helpful (or “pro-social”) acts. In some cases, these benefits gave an evolutionary advantage to those who developed enhanced social skills, like recognizing other’s psychological states and solving social conflicts. Churchland suggests that the ability to understand and consider others’ desires or needs—empathy—is a prerequisite to morality and lies at the heart of moral reasoning.

All that said, Churchland takes care to avoid a narrow perspective that relies solely on biology to explain everything about morality. Although she proposes that morality developed in response to basic evolutionary challenges about how to get along with others and sustain our species, she duly notes that morality isn’t strictly a matter of biology and evolution; cultural and historical forces, like civics and religion, have played important roles as well.

Churchland’s main goal in writing Braintrust, then, is not simply to portray morality as a product of biology but to shed light on how our moral beliefs evolved. In doing so, she hopes to create some common ground for people who may hail from different moral traditions. By studying morality’s fundamental parts, especially its link to humans’ social interactions, she suggests we can learn what makes us live closer, more cooperative—and thus happier—lives with others.

Morality is always exit in relative term.We help others to win goodwill from them.We hate some one to save our life.All thing we do our life is overcome to fear of death.Death give to meaning to our life if death is not there life is void.So morality also depend on our need,if we can overcome the fear of death with help of others we express gratitude,If any man is threat to us we hate him we try to destroy him.All our moral behavior is depend on our selfishness

It sounds like this book sits on the fence between the atheistic camp, which sees morality as perfectly possible without religion, and the religious fundamentalists, who accuse atheists of being completely immoral (and actually expect them to behave immorally).

The atheists’ position, however, seems to be bolstered by the proposition that evolutionary forces naturally encouraged us to behave in a cooperative and even empathetic way. As with the creation of the universe itself, there was no need for divine intervention.

From the Article’s Author:

Thanks for the comments.

@ Ramesh:
From an species wide perspective, you could say this book suggests that we are moral because of the benefits it brings. However, what this book contributes is a painstaking look at how those basic systems that give us pleasure when we help ourselves have been tweaked in humans to do the same for situations where we help others.

This would suggest that, from each individual’s perspective, prosocial behavior is intrinsically valuable or rewarding, not because we have an elaborate excuse to be kind to others. Of course, someone could say that we do kind acts solely because of the good feeling we get afterwards. However, this book suggests that we see ‘feeling good’ and ‘helping others’ as the same thing, so that, from our perspective, helping others simply becomes good in and of itself.

@ Just Another Naked Ape:
It seems that Churchland has a pragmatic view of morality, and has historically been in the atheistic, or naturalistic camp. In this book she states that religion has shaped ideas about morality, but she believes this shaping is chronologically downstream and presently concurrent to evolution’s impact on morality.

From this book, Patricia Churchland, it seems, would believe that morality predates religion (at least in it’s current form) and is entirely able to arrive from secular forces. However, the idea of having behaviors relate to a set of shared, stable, abstract concepts and laws -how we think about morality- she would argue, is greatly impacted by civic and religious institutions. Which is still a secular perspective.

If you find this interesting, I’d definitely recommend you read the book.

The review leaves unclear how credible Churchland’s attempted explanation of the evolution of morality is - scientifically speaking.

Many a philosopher has created a plausible theory to explain real-world phenomena and experiences.  But a scientific theory must be more than plausible; it must make predictions about observable phenomena, and those predictions must be capable of disproof by contrary evidence.

How well do Churchland’s theses and arguments stack up against these criteria?

From the article’s Author:

Each *sub-claim* Churchland makes is clearly cited, with good amount of rigor and relevant discussion that would likely stand up to scientific review. However, her main theory is too broad to test with any given experiment, and is, instead, an inference from the amalgamation of works she discusses. I believe the best answer to your question is that her main theory is a string of findings that does not stray from or surpass work already embraced by the research community.

We might speculate about her credibility as a scientific reviewer, but she does not take it upon herself to take the next steps scientifically. In fact, she is not claiming to advance science at all. She is importing scientific findings, and their conclusions, into popular and philosophical debate to try to catch up those discussions to the empirical findings of the day.