Mindfulness-Based Resilience Training for law enforcement officers has been a decade in the making, and the first empirical research on the program is now coming to light—not a moment too soon.

“The practice of pausing, coming into awareness, breathing, and gently responding can dramatically alter the way we respond to stress and anger,” says Aaron L. Bergman, coauthor of a new study on the program. “The recent increase in tragedies involving police officers has certainly injected a profound sense of meaning to our work”—though, it goes without saying, they’re only addressing one part of a much broader problem. 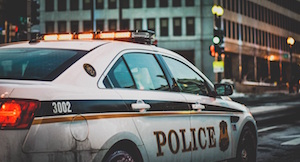 Their new study, published in the journal Mindfulness, demonstrates that practicing mindfulness—focusing one’s awareness and attention on the present—significantly lessens law enforcement professionals’ stress and anger.

Bergman, Michael S. Christopher, and Sarah Bowen, all from Pacific University’s School of Professional Psychology, explain that in the station, officers face unique challenges: departmental politics, pending litigation, irregular shifts. And on the street, they come face-to-face with criminals, violence and death, and situations that threaten their own safety.

The authors note that many law enforcement professionals try to maintain tough-guy (or -gal) demeanors and shun seeking assistance with on-the-job stressors. To cope, many lean on unhealthy—if not life-threatening—behaviors. Their rates of depression, post-traumatic stress disorder, substance abuse, and even suicide are higher than in the general population.

Anathema to their duty to defend and protect, “Police officers are often left to manage stress and anger in a cultural context that does not support help-seeking behavior and that encourages maladaptive coping mechanisms,” Bergman and his team write.

For the study, 47 officers with an average tenure of nearly 14 years from police departments around the Pacific Northwest engaged in exercises designed to enhance their physiological and psychological resilience at home and while wearing a badge. They practiced body-awareness exercises, mindful movement and martial arts exercises, and meditating while walking, sitting, and eating.

Before and after beginning the eight-week program, officers considered the level of anger they’d felt over the past week. Were they “irritated,” “ready to explode,” or just “annoyed”? They also rated their levels of stress as well as their mindfulness, indicated in statements such as, “I watch my feelings without getting lost in them” or (indicating low mindfulness) “It seems I am ‘running on automatic’ without much awareness of what I’m doing.”

Across the course of the program, officers reported significant reductions in anger and stress. The mindfulness skills that seemed to be most beneficial were nonjudgment (simply noticing a thought or sensation without evaluating it, such as labeling it as good, bad, right, or wrong), and acting with awareness (turning off autopilot and taking in the sensations around you). Mindfulness exercises appear to free officers from negative thought patterns, creating an opportunity to introduce positive thoughts instead, the researchers explain. Officers experience greater psychological resilience.

“Our take-home message…would simply be the power of the present moment,” Bergman says. It “allows us to greet that space and feel that freedom, even for just one breath. Whether we are greeting an armed suspect, or a crayon-covered wall, the practice is the same.”