This article is the fifth in a series exploring the effects that unconscious racial biases have on the criminal justice system in the United States.

The science is clear that unconscious—or “implicit”—biases contribute to racial disparities in law enforcement outcomes, influencing everything from who is stopped by police (black more than whites), and what happens to them during those stops, to the severity of their sentences if convicted. 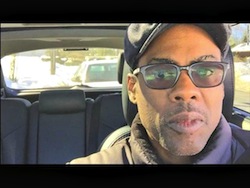 During the past year, actor and comedian Chris Rock took selfies every time he was pulled over by police, as anecdotal evidence of bias in traffic stops. Rock says this happened three times in two months. © Chris Rock

Most relevant, Jennifer Eberhardt of Stanford University and her colleagues have demonstrated that the mere subliminal presentation of a black face causes civilians and police officers alike to see weapons more quickly; likewise, the researchers found that subliminal exposure to objects that are associated with crime, like guns, causes officers’ eyes to involuntarily shift toward Black, as opposed to White, faces.

Joshua Correll (now at the University of Colorado) and his colleagues, in their “shooter task” computer simulation studies, have shown that people are faster to shoot armed blacks than armed Whites, and that this tendency is more common among people who are aware of the stereotype that blacks are dangerous (but don’t necessarily have a general negative attitude toward blacks).

Relatedly, Eric Knowles and I have shown that this “shooter bias” is correlated with an unconscious stereotype linking blacks (as opposed to Whites) with weapons, but not a more general negative implicit attitude toward them. In another set of studies, Correll and colleagues found shooter bias among samples of police officers, as have Ashby Plant and her colleagues.

Supporting the notion that this bias reflects implicit stereotypes and behaviors that are almost certainly unintentional, Correll and his colleagues found that minority officers exhibited shooter bias at a rate comparable to (possibly even greater than) White officers. This is corroborated by very recent evidence from a Department of Justice report on use of lethal force by the Philadelphia Police Department: Black officers had higher rates of “threat perception failures” (thinking the suspect is armed when he is not) for black suspects than White officers did. Surely these behaviors reflect largely unintentional biases.

These research findings help explain disturbing cases where officers wrongfully shoot unarmed or innocent suspects, as well as racial disparities in seemingly mundane pedestrian and vehicle stops. While the former are jarring and destabilizing, they occur about once or twice a week in the United States. The latter occur thousands of times a day.

In both cases, the burden falls disproportionately on young, black men. We know the names of Oscar Grant, Sean Bell, Eric Garner, Tamir Rice and other unarmed black men and boys who have died as a result of unnecessary use of force. We do not know the names of the millions of people who have been swept up in the criminal justice system, in most cases for non-violent offenses, due to discretionary stops by police. Nevertheless, the results of their criminal justice involvement are devastating to their families and communities. They lose income and wealth, future employment opportunities, voting rights, and even health quality.

So what can social psychologists contribute to the effort to improve policing in order to promote a fairer, more equal, healthier society, given what we know about how implicit bias causes discrimination?

To be sure, efforts are underway to identify tools to reduce implicit bias, including interventions that involve raising awareness of implicit bias and discrimination, as well as providing strategies for overcoming bias. Some of these efforts, such as a 2014 “contest” of bias reduction methods led by Calvin Lai of the University of Virginia, are very ambitious and systematic and have identified promising approaches. Furthermore, implicit biases and automatic behaviors are no longer seen as immutable; rather, Irene Blair of the University of Colorado has identified a host of situational and psychological factors that can influence the manifestation of stereotypes and prejudices. .

But to date, research has yet to uncover a straightforward method that can lastingly mitigate implicit biases. This shouldn’t be entirely surprising: Implicit stereotypes are formed and reinforced by media representations that pair certain demographic characteristics—such as gender, race, or ethnicity—with specific roles in our society. Black criminals and female teachers, white male CEOs and Asian drycleaners. And some, including the black=criminal association, are more pervasive than others. Until we design a method for inoculating people from subsequent exposure to the misleading information in their environment (setting aside for the moment the potential for unintended consequences of such an achievement), we won’t achieve lasting reductions of implicit biases.

In the absence of a known, reliable method for reducing implicit bias—one that could be feasibly applied to law enforcement officers—we should consider some lower hanging fruit.

Based on my research in this area over the past 15 years, here’s where I think is a particularly good place to start: Limiting the discretion that police officers have in who they stop in the first place.

Police officers have remarkably high discretion in who they can choose to stop and search. High discretion invites decisions made under high uncertainty. This is a direct result of the very permissive Supreme Court stance on police stops, which essentially is indifferent to whether racial bias motivates a stop, as long as there is a legal pretext for it, like the classic broken taillight. This is compounded by the very vague (and often circular) definitions of “reasonable” suspicion, the legal standard required for an investigatory stop. And it is borne out in the data from New York City, where civilian stops reached approximately 700,000 in 2009 (they have dropped dramatically in recent years, with the election of a new mayor who was opposed to the Stop & Frisk program).

Among those stopped in New York during the peak of Stop & Frisk, approximately six percent were arrested, and most of the arrests were for outstanding warrants. Among those who were stopped, arrest rates (and contraband finds) were higher for whites than for blacks and Hispanics, compelling evidence that race was a factor in decisions about who got stopped: A relatively greater number of blacks and Hispanics who were stopped were actually innocent, suggesting that whites needed to reach a higher threshold of suspiciousness to get stopped in the first place. Similar patterns have been found in cities and highway patrol corridors throughout the U.S. The very low productivity rates of police stops reflect the high discretion with which officers are operating.

High discretion nearly necessitates that judgments will be influenced more by cognitive shortcuts like stereotypes. By setting higher and clearer thresholds for reasonable suspicion, police supervisors would cause their patrol officers to make fewer stops, more of which would be justified and fruitful. This would have the effect of reducing racial disparities in who gets stopped in the first place. The wide discretion would have to be replaced with prescriptive guidance for making stops based on factors borne out by empirical analysis, such as specific behaviors that are known to be reliably related to criminal behavior.

There is good precedent for this—and, ironically, it comes from the leadership of the man later responsible for the dramatic escalation of Stop & Frisk in New York: Commissioner Raymond Kelly. In 1998, as Commissioner of U.S. Customs, Kelly directed agents to use six behavioral indicators of suspiciousness, down from 43. The result was a 75 percent reduction in the number of searches, but a quadrupling of contraband finds. The net effect was that roughly the same absolute number of smuggling seizures was made, but many fewer innocent travelers were troubled. Racial disparities in search rates were also reduced.

In 2003, the Bureau of Justice Statistics projected that, if trends persisted, 32 percent of black men born that year in the U.S. would be incarcerated at some point in their lives, roughly five times the rate projected for whites. The disparity is troubling, but the raw statistic—nearly a third of black men incarcerated, with all the negative collateral effects incarceration visits on them, their families, and their communities—is staggering. Helping police to be more discriminating about who they stop will help them be less discriminatory in who they stop.