We hear from many teachers in low-income schools that social-emotional learning (SEL) is considered an “add-on”—something that can happen after students have proven their academic merit. If that’s the case, does that mean social-emotional learning is a luxury only for wealthy children, whose schools perform better academically and can afford to invest time and money in SEL programs?

Absolutely not. In fact, it’s not a luxury for either group. It’s a necessity.

Numerous studies have shown that social-emotional learning (SEL) increases students’ academic achievement and positive attitudes toward self, school, and others. It also reduces problem behavior and emotional distress. In other words, it’s good for everyone—but for different reasons. 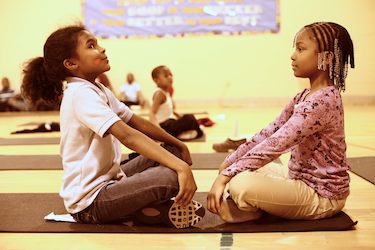 Students engaging in SEL at a program run by the Holistic Life Foundation.

SEL can help students from disadvantaged backgrounds overcome the cognitive and emotional scars they suffer as a result of their environment. As Paul Tough reports in his new book, How Children Succeed, studies over the last 10 years have shown that the body’s reaction to stress—caused by things such as violence, exposure to substance abuse, and neglect in infancy and childhood—can have very serious and long-lasting negative effects on kids’ psychological, physical, and neurological development.

This, in turn, negatively impacts their academic success: Children who experience this kind of stress often suffer from learning and behavioral problems, including difficulty concentrating and sitting still; they also have a hard time handling challenging situations and regulating their emotions.

Social-emotional skills such as mindfulness can help children lessen their anxiety and improve their attention in the classroom. Teaching students to recognize, express, and regulate their emotions through programs like RULER may help them handle difficult emotions.

But children from disadvantaged backgrounds aren’t the only ones who can benefit from social-emotional education. Scientists have found that affluent students, particularly teenagers, are at tremendous risk for problems such as depression, anxiety, substance abuse, eating disorders, and cutting.

For example, 22 percent of adolescent girls from affluent homes are clinically depressed—that’s three times the national rate of depression for adolescent girls. Affluent teenage boys suffer from depression and anxiety as well, although not at the same rate as girls. However, by the time boys reach 11th and 12th grades, they often self-medicate with drugs and alcohol to deal with their emotional issues.

While it’s easy to think that children from wealthy backgrounds have all the resources to set them on a sure path to success, this is not the case at all.

One reason why is the extreme pressure to succeed that affluent children face. High expectations for children are usually a good thing; however, as Madeline Levine writes in her book The Price of Privilege, “It is when a parent’s love is experienced as conditional on achievement that children are at risk for serious emotional problems [because] this activates intense feelings of shame and hopelessness.”

In addition, striving for success to satisfy their parents rather than themselves leaves children feeling “empty”—without a sense of who they are and what they want. This lack of identity formation also contributes to their emotional problems.

Studies also suggest that affluent parents’ busy schedules can create a sense of isolation in their children, often resulting in an insecure attachment between parent and child. Scientists have found that children who have not formed a strong emotional bond with a caregiver are often less confident, have fewer friends, and struggle academically. Problems with attachment carry over into adulthood, including higher levels of anxiety and depression and difficulty forming close relationships.

While not all affluent children experience these kinds of emotional problems, there’s another reason why they might benefit from SEL: the impact of social class on social-emotional skills.

In a series of studies, scientists (including the GGSC’s Dacher Keltner) have found that people from higher social classes show lower levels of generosity, are less interested in connecting with other people, and are worse at reading others’ emotions. (We published an overview of this line of research on Greater Good just last week.)

The studies also suggest that people of high socioeconomic status are more prone to unethical behavior, due to their more favorable attitudes toward greed. This is particularly alarming when considering that many of our future doctors, lawyers, policymakers, corporate executives, and government leaders spend their formative years in affluence.

Fortunately, science is helping us understand that none of these outcomes are inevitable—that it’s possible to teach empathy, compassion, and kindness. Even in the studies on socioeconomic status, researchers have found they could boost rich people’s empathy and generosity simply by having them imagine being on a lower rung of the social ladder.

So what can schools do to shape all their students’ social-emotional skills for the better? For starters, administrators can check out the Collaborative for Academic, Social, and Emotional Learning’s (CASEL) newly-released list that identifies 23 of the most effective preschool and elementary SEL programs (a list of middle and high school programs will be released in 2013).

For teachers who would like to teach social-emotional skills to their students but don’t have the support of their schools, keep in mind that SEL doesn’t necessarily require a full-school program. In fact, simply making a daily effort to cultivate mindfulness and a caring classroom can do wonders for students’ emotional well-being. While a secure relationship with a teacher cannot fully take the place of a close emotional bond with a parent, research has found that students who believe their teachers care about them do better academically and emotionally.

I’ll be writing much more about strategies like these for teachers, administrators, and entire school communities. But first and foremost, we need to consider why these strategies are so important for students of all backgrounds. Even though schools can’t cure all the ills of society, they can take a big step in the right direction by embracing social-emotional learning.

The immediate outcome of SEL may be academic success or improved psychological well-being for the individual student. But, in the end, we all benefit through the creation of a kinder and more compassionate society.

Thanks so much for emphasizing this topic—I think it’s really important. I spend about four weeks at the start of each semester focusing on mental and emotional health with my 9th grade health education students, and then encourage students to practice these skills as they move through their teen years.

Hi Christopher,
Thanks for your comment. I love hearing from
teachers who are addressing the social-emotional
well-being of their students.
Warm regards,
vicki

Vicki, excellent points! SEL definitely has a direct impact on the students’ self-worth/confidence but unfortunately most administrations do not see it. Great post, I’m retweeting it now.

This is a fabulous article, Vicki.
Like Christopher, I am focusing on this with my Year 7 students during our well-being sessions twice a week. We also do the same in Health lessons for Year 7-10. I have forwarded your article to my staff as a resource and confirmation of the value of what we do. Thank you!

Thanks to all of you for your positive and encouraging
feedback! I really appreciate it. And thanks for passing
its along!
Warmly,
vicki

I do not agree! Social and emotional learning is not a luxury in our schools, it is essential. The overwhelming level of information and pressure coming at our children is unlike any time in our country’s history. The Academic, Social and Emotional Learning Act will help give the tools Them They need to swim in the tumultuous waters of the 21st century.
All schools of public and private independete have to invest more to improve the apredizado of our children.

Thank you for your participation