Schools are beginning to offer an increasing number of courses in social and emotional intelligence, teaching students how to better understand their own emotions and the emotions of others.

It sounds warm and fuzzy, but it’s a trend backed up by hard data. Today, new studies reveal that teaching kids to be emotionally and socially competent boosts their academic achievement. More precisely, when schools offer students programs in social and emotional learning, their achievement scores gain around 11 percentage points. 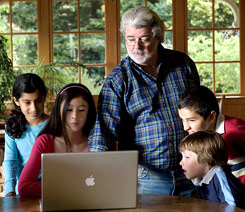 That’s what I heard at a forum held last December by the Collaborative for Academic, Social, and Emotional Learning (CASEL). (Disclosure: I’m a co-founder of CASEL.) Roger Weissberg, the organization’s director, gave a preview of a massive study run by researchers at Loyola University and the University of Illinois, which analyzed evaluations of more than 233,000 students across the country.

Social-emotional learning, they discovered, helps students in every way.

Their analysis reveals that students receiving lessons in social and emotional skills improved on every measure of positive behavior—such as classroom discipline, attendance, and liking school—and were less likely to engage in anti-social behavior, from bullying and fights to substance abuse.

Among these students, there was also a drop in the number who were depressed, anxious, and alienated.

What’s more, the study showed that the positive gains were biggest among “at-risk” kids, who are most likely to fail in their education. In the era of No Child Left Behind, where schools are rated on how well students score on standardized tests, that’s a huge advantage for individual students and schools alike.

Teaching students skills like empathy, self-awareness, and how to manage distressing emotions makes them better learners, says Richard Davidson, a neuroscientist at the University of Wisconsin and a presenter at the CASEL forum. He pointed to data showing that when the brain’s centers for distress are activated, they impair the functioning of the areas involved in memory, attention, and learning. In other words, because of the way our brains are wired, our emotions can either enhance or inhibit our ability to learn.

Courses in social and emotional learning also make great sense, Davidson argues, because of neuroplasticity—the fact that repeated experiences shape the brain. The more a child practices self-discipline, empathy, and cooperation, the stronger the underlying circuits become for these essential life skills.

Lucas sees social-emotional learning as vital to the future of education. As computers take over teaching raw knowledge to kids, teachers will have more time to help students with motivation, cooperation, and other elements of emotional intelligence.

“Anybody who’s an adult, working in the adult world, realizes that your ability to encourage other people, form groups, and get the best out of everybody is the secret to success,” says Lucas, who I interviewed at the forum.

Lucas argues that learning must consist of more than just assigned reading and lectures. Instead, we must embed social and emotional lessons into the educational process—for example, by assigning students to work with others and grading the group on teamwork and emotional relationships with each other, as well as their individual achievement. “These are the things, ultimately in the real world, that are the main factors in getting hired and getting fired,” says Lucas.

Research supports these observations. For example, when Claudio Fernando- Araoz, head of research for the executive recruitment firm Egon Zehnder International, looked at CEOs who had succeeded and those who had failed, he found the same pattern in America, Germany, and Japan: Those who failed were hired on the basis of their drive, IQ, and business expertise, but were fired for their lack of emotional intelligence. They simply could not win over, or sometimes even just get along with, their board of directors, or their direct reports, or others on whom their own success depended.

And yet, these human skills—how to get along, how to cooperate, how a group can exhibit emotional intelligence—are absent from the standard academic curriculum. As initiatives like CASEL—along with similar organizations, such as the Committee for Children and the Open Circle Program—spread social-emotional learning curricula to schools, I think we’ll see more and more hard evidence that these programs are helping students succeed.