At Toluca Lake Elementary School in Los Angeles, a cyclone fence encloses the asphalt blacktop, which is teeming with kids. It’s recess time and the kids, who are mostly Latino, are playing tag, yelling, throwing balls, and jumping rope. When the bell rings, they reluctantly stop and head back to their classrooms—except for Daniel Murphy’s second grade class.

Murphy’s students file into the school auditorium, each carrying a round blue pillow deco-rated with white stars. They enter giggling and chatting, but soon they are seated in a circle on their cushions, eyes closed, quiet and concentrating. Two teachers give the children instructions on how to pay attention to their breathing, telling them to notice the rise and fall of their bellies and chests, the passage of air in and out of their noses. Though the room is chilly—the heating system broke down earlier that day—the children appear comfortable, many with Mona Lisa smiles on their faces. 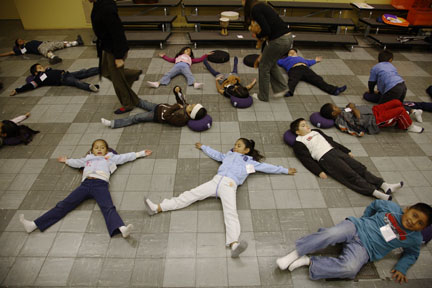 “What did you notice about your breath this morning?” one teacher asks.

“Mine was like a dragon,” says Michael, a child to the teacher’s right. Albert, another child, adds, “Yeah, I could see mine. It was like smoke.”

The teachers lead the children through 45 minutes of exercises focused on breathing, listening, movement, and reflection. At different points, the kids are asked to gauge their feelings—calm, neutral, or restless. There are no right or wrong answers, just observation. The session ends with the children lying quietly on their backs, stuffed animals rising and falling on their stomachs, as they contemplate peace within themselves and in their community. Later, seven-year-old Emily sums up her experience. “I like the class because it makes me calm and soft inside. It makes me feel good.”

Toluca Lake is one of a growing number of schools that are using “mindfulness trainings” in an effort to combat increasing levels of anxiety, social conflict, and attention disorder among children. Once a week for 10 to 12 weeks, the students at Toluca take time out from their normal curriculum to learn techniques that draw on the Buddhist meditative practice of mindfulness, which is meant to promote greater awareness of one’s self and one’s environment. According to mindfulness educator Susan Kaiser, bringing this practice into schools is “really about teaching kids how to be in a state of attention, where they can perceive thoughts, physical sensations, and emotions without judgment and with curiosity and an open state of mind.”

That such an unconventional practice—with its roots in a religious tradition, no less—has made its way into public schools may come as a surprise to many people. But schools have been turning to mindfulness for very practical reasons that don’t concern religion, and their efforts have been supported by a recent wave of scientific results.

Steve Reidman first introduced mindfulness practices to Toluca Lake about six years ago. Reidman, a fourth grade teacher at the school, had been experiencing problems with classroom management—a first for him, after many years of teaching. Conflicts on the playground were escalating and affecting his students’ ability to settle down and concentrate in class. When he confided his problems to Kaiser, a personal friend, she offered to come to his class to teach mindfulness, a technique she’d taught to kids as a volunteer at a local boys and girls club.

“I noticed a difference right away,” says Reidman. “There was less conflict on the playground, less test anxiety—just the way the kids walked into the classroom was different. Our state test scores also went up that year, which I’d like to attribute to my teaching but I think had more to do with the breathing they did right before they took the test.”

News of Reidman’s positive experience spread to other classes at the school and helped launch Kaiser’s career as the founder and director of a new nonprofit organization: InnerKids. Funded through private grants, its mission is to teach mindful awareness practices to students in public and private schools for little or no cost. In the last five years, the organization has served hundreds of schools across the country and has grown to the point where there’s more demand for the program than Kaiser can handle alone. Recently, she retired from her successful law practice to devote herself fully to InnerKids. She’s now busy training new teachers. “Requests come from all over—New York, California, the Midwest,” says Kaiser. “It’s really amazing how this has caught on.”

A 2004 survey of mindfulness programs by the Garrison Institute in New York—an organization that studies and promotes mindfulness and meditation in education—showed that many schools are adopting mindfulness trainings because the techniques are easy to learn and can help children become “more responsive and less reactive, more focused and less distracted, [and] more calm and less stressed.” While mindfulness can produce internal benefits to kids, the Garrison report also found that it can create a more positive learning environment, where kids are primed to pay attention.

InnerKids is one of several mindfulness education programs that have sprouted up around the country; others include the Impact Foundation in Colorado and the Lineage Project in New York City, which teaches mindfulness to at-risk and incarcerated teenagers. Like these programs, Kaiser’s curriculum was inspired by the work of Jon Kabat-Zinn, the founder of the Stress Reduction Program at the University of Massachusetts Medical School. Kabat-Zinn was among the first scientists to recognize that mindfulness meditation might have healing benefits for adult patients suffering from chronic pain. He developed a secular version of the Buddhist practice, which he called Mindfulness-Based Stress Reduction (MBSR), and ran studies demonstrating its effectiveness. Now, with over a thousand studies published in peer review journals about it, Kabat-Zinn’s MBSR program has been found to reduce not only chronic pain but also high blood pressure and cholesterol levels. Evidence also suggests MBSR can help improve one’s ability to handle stress and alleviate depression, anxiety, post-traumatic stress, and eating disorders.

Despite the success of MBSR with adults, there has been little corresponding research on children, though that’s starting to change. At the University of British Columbia in Canada, psychologist Kimberly Schonert-Reichl and a graduate student, Molly Stewart Lawlor, recently finished a pilot project on mindfulness in schools, with funding and teacher training provided by the Bright Lights Foundation (now called the Goldie Hawn Institute), an organization founded by actress and children’s advocate Goldie Hawn. Fourth through seventh graders in six Vancouver public schools were instructed in mindful awareness techniques and positive thinking skills, then tested for changes in their behavior, social and emotional competence, moral development, and mood.

The positive response to the program was almost immediate. “In one classroom, the children went from having the most behavioral problems in the school—as measured by number of visits to the principal’s office—to having zero behavioral problems, after only two to three weeks of instruction,” says Schonert-Reichl.

Her results also showed that these children were less aggressive, less oppositional toward teachers, and more attentive in class. Those who received the mindfulness training also reported feeling more positive emotion and optimism, and seemed more introspective than children who were on a waitlist for the training. “It’s important to do research like this because kids need something to cope with all the pressures at school,” says Schonert-Reichl. “If we don’t find something to help them, there are going to be tremendous health costs for these kids down the road.”

Similar research is getting underway in the United States. Susan Smalley, a geneticist and the director of the new Mindful Awareness Research Center at the University of California, Los Angeles, has found that a modified version of MBSR can help teenagers with Attention Deficit Hyperactivity Disorder (ADHD) by reducing their anxiety and increasing their ability to focus. She is continuing to work with ADHD teens, but her encouraging results have prompted her to wonder if MBSR might help other groups of children—particularly preschoolers, who must learn to regulate their emotions and behaviors to be successful throughout school. She contacted Kaiser and together they launched a program with children attending a preschool run by UCLA. They adapted a version of Kaiser’s curriculum to see if it could be taught to such young kids; their results so far indicate that it can. Now they’re embarking on a series of studies over the next year that will compare a control group to the UCLA preschoolers, as well as to second and fourth graders at Toluca Lake.

“We want to find out if mindfulness can help children over their entire lifespan, and if it might help inoculate them against psychological problems later in life,” says Smalley.

Patricia Jennings, a researcher at the Garrison Institute, finds much of this research encouraging but says more work is necessary to prove the effectiveness of mindfulness programs. In particular, she hopes studies will focus on specific components of these programs and control for other factors that might be operating on the kids. This will give researchers and practitioners a better sense of which aspects of the programs have the most positive effects on children. “If we found something, like breath awareness, that is effective at reducing stress and requires very little in terms of teacher training or cost, we would have a lot easier time getting it into school curricula,” she says.

Despite these concerns, teachers have encountered little resistance to introducing mindfulness to their students, and they report generally positive results.

Though some expressed initial concern about how parents might react to the programs—which, after all, grew out of spiritual traditions—practitioners and researchers say they have successfully removed mindfulness from any religious context. “I don’t even like to use the word ‘meditation’ when I talk about mindfulness, since it has religious connotations for some,” says Smalley. “The programs we are studying are about stress reduction and increasing awareness and are totally secular.”

Still, there’s likely to be controversy around these programs as they expand, says Goldie Hawn. “There will always be people who see this as scary, or as some kind of Eastern philosophy that they don’t want for their kids,” she says.

But, she adds, most people find research results convincing, and she believes research will eventually show that mindfulness helps kids in much the same way it’s already been shown to help adults. “Mindfulness gives kids a tool for understanding how their brain works, for having more self-control,” says Hawn. “If we know it also has the potential to decrease stress, decrease depression, and increase health and happiness—like the research on adults shows—wouldn’t it be selfish to withhold it from children?”

At Toluca Lake Elementary School, the students make their own arguments in favor of mindfulness. “Last week, I made a picture of a heart to give to a special friend of mine, but my little brother ripped it up. I was really mad at him,” says Emily, of Daniel Murphy’s second grade class. She pauses a moment before adding, “Breathing helped me to calm my anger. I realized, ‘Hey, I can just do it over again.’ I never would have thought like that if I hadn’t taken the class.”

Why not check out my class’ website about
Meditation, Mindfulness & Buddhism

Please post this address anywhere you think it could
be seen and useful! Many thanks!! If you left a
comment you would make some children really happy.