As economic inequality in the United States continues to increase, a new study offers some discouraging news for anyone expecting the rich to spontaneously help those who have less.

In a series of experiments, a team of researchers at UC Berkeley found that people of lower socioeconomic status are actually more altruistic than those higher on the economic ladder.

In one of these experiments, the researchers, led by doctoral student Paul Piff, gave participants the opportunity to share $10 with an anonymous stranger. A few days earlier, the participants had all filled out a questionnaire in which they reported their socioeconomic status. The results showed that people who had placed themselves lower on the social scale were actually more generous than upper class participants were. 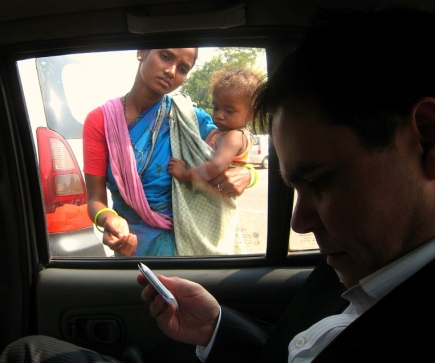 A second experiment built on this finding, suggesting that there’s something about the specific psychological experience of having less that induces people to give more. Piff and his colleagues, including Greater Good Science Center Faculty Dacher Keltner, had participants engage in an exercise that made them feel like they were either of higher or lower status. Then the participants had to say how they thought people should divide up their annual income—on food, recreation, charitable donations, or other items.

Those made to feel lower on the social totem pole said that a higher percentage should be spent on charity.

So what is it about being less well-off that causes people to be more generous?

In other experiments, the researchers found evidence that lower-class participants’ greater tendency to perform kind, helpful—or “pro-social”—behavior could be explained by their greater concern for egalitarian values and the well-being of other people, and their stronger feelings of compassion for others.

Piff and his colleagues argue that the poor may feel more compassion because they are more connected to those around them, psychologically and socially. They are more dependent on other people to get by, for instance, and previous research has found that, perhaps as a result of that dependency, they display more empathy and are more attuned to other people’s body language than the rich. On the flip side, as people attain higher status, their ability to take others’ perspectives is diminished.

Piff and his colleagues’ findings have profound implications at a time when the richest one percent of Americans now owns more than the combined wealth of the bottom 90 percent.

“Our data suggest that an ironic and self-perpetuating dynamic may in part explain this trend,” write the researchers in their study, soon to be published in the Journal of Personality and Social Psychology. “Whereas lower-class individuals may give more of their resources away, upper-class individuals may tend to preserve and hold onto their wealth. This differential pattern of giving versus saving among upper- and lower-class people could serve to exacerbate economic inequality in society.”

This article has affirmed something I have known for a long time, from working in certain communities.
Although it is important to give “MONEY” there is so much more we can give in addition. Congratulations to those who get it! and are making a difference in the lives of others.

Let us keep making a difference and teach our children to do the same.
Dr Daphne.

We are all a work in progress, learning as we go along, hopefully we will learn before its too late. Yes the more we give the more we get ! difficult lesson for us all.

There’s a saying in Jamaica “NO ONE TAKES A WAGON ATTACHED TO THE HURSE WHEN YOU LEAVE HERE” and as a matter of fact neither do they take the bank account.

I agree with you keptydon, it is very sad. Imagine what
the rich could actually do for this world. If they had
more compassion they could change so many lives. But
instead their selfish antics corrupt everything and
create problems in our society. I wish more people
would be more giving and less self-absorbed so that
our children learn what’s important in life.

To me giving cash assistance has much less impact on poverty than creating employment opportunities. People become beggars when they become habitual of recieving cash grants.

Azhar, it doesn’t really matter what has more impact. The point is that lower class people have more compassion in general and are more likely to give when they have the opportunity. And I hope you’re not suggesting that there is no unfair economic inequality.

But I do think it would be interesting if someone did a study on more direct helping behavior, like if a confederate pretended to need assistance.

You see Amanda it is easy to judge the rich people for not sharing . I have seen poor people that after getting money became a lot evil than a normal rich guy is every day . The poor share because they see how hard everyday life is and they understand that they have to help but this does not make them better people .
In the end this is the human nature .
Is a lion guilty for not sharing his prade?

I understand that we are more evolved and humanity can easily chnage the system but this will never gonna happened. History confirms !

the poor give more .. that’s because they feel the same pain that the one who ask feels
remember in the bible .. when that old poor women give 2 pins ..
Jesus said that she has gevin even more that any one else
that’s because she gave from her needs .. gave all she had ..

Asalah, great biblical reference! The Bible has a lot of great lessons on altruism and charity. As I read this article I thought of a few sunday school lessons that were taught to me as a young boy, so it’s interesting to see someone else with the same train of thought.

What I found most interesting about this article, is the relationship between hardship and empathy/sympathy. It makes sense that people who experience hardship understand that there are others who are going through the same thing or worse. On the other hand, people who are financially stable may be so ingrained in their lifestyle that it takes a bit of a jolt to reprogram their “baseline compassion”. I think it would be great if the gap in that disconnect closed and awareness increased.

Maybe if the poor people didn’t give away their money, they wouldn’t be poor.

This doesn’t surprise me as I think the more money you have the more of it you want. That’s why there is so much corruption in the world and it mainly involves those who have money or power. Of course it’s not always the case but that’s the way it seems mostly.

wonderful to read and I strongly believe what has been found in this research. I am also from poor back ground, though I am working I still have sympathy, love and always like to give, share to needy people. I have been doing these in my own little ways and I am determined to continue…