This month, we feature videos of a Science of a Meaningful Life presentation by Dacher Keltner, the author of Born to Be Good and Faculty Director of the Greater Good Science Center. In this adaptation from his talk, Dr. Keltner discusses the evolutionary roots and biological building blocks of human compassion.

Charles Darwin was the beloved and engaged dad of a really rambunctious group of children. When one of his daughters died at age 10, Darwin started to have these deep insights about the place of suffering and compassion in human experience.

That led him to argue, in The Descent of Man, that sympathy is our strongest instinct, sometimes stronger than self-interest, and he argued that it would spread through natural selection, for “the most sympathetic members, would flourish best, and rear the greatest number of offspring.”

This point was totally forgotten by evolutionary science for quite some time. Well, given all the awful things humans do to each other, how could you make the case that sympathy is our strongest instinct? 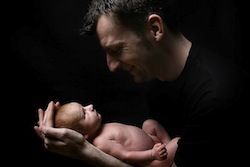 The answer lies in the dependence and vulnerability of our children. Little baby chimpanzees eat by themselves; human babies can’t. Baby chimpanzees sit up on their own; you sit up a human baby, and they go, “Watch out, man, my head’s really big!” Boom!

Their heads are so big because their brains are so big. To fit their big heads through the human birth canal—which narrowed as we started to walk upright on the African savanna—our babies were born profoundly premature and dependent upon people to take care of them.

In fact, our babies are the most vulnerable offspring on the face of the Earth. And that simple fact changed everything. It rearranged our social structures, building cooperative networks of caretaking, and it rearranged our nervous systems. We became the super caregiving species, to the point where acts of care improve our physical health and lengthen our lives. We are born to be good to each other.

Are you a vagal superstar?

You can see our natural connectivity and compassionate instincts in how our brains react to pain. Let’s say I pinch or burn your skin—the anterior cingulate region of your brain will light up. But it’s not just your own pain. If you see somebody else suffering, that very same part of the cortex activates. We have the same pain response to other people’s pain as we do to our own experience of pain. We are wired to empathize, if you will.

That’s not the only part of the brain that lights up when we see images of suffering and distress. The amygdala—the brain’s threat detector—activates, which is no surprise since we might worry the suffering will come our way.

But there’s another area that lights up, a very old part of the mammalian nervous system called the periaqueductal gray, way down in the center of the brain. In mammals, this region is associated with nurturing behavior. We don’t just see suffering as a threat. We also instinctively want to alleviate that suffering through nurturance.

This essay is adapted from a talk by Dacher Keltner. Members of the Greater Good Science Center can watch the entire video of the talk here. Not a member? Join here.

We can find another example of how our bodies are wired for compassion in a fascinating part of your autonomic nervous system called the vagus nerve. Vagus is Latin for “wandering,” and the vagus nerve starts at the top of the spinal cord and wanders through your body, through muscles in your neck that help you nod your head and orient your gaze toward other people and vocalize. It then drops down and helps coordinate the interaction between your breathing and your heart rate, then goes into the spleen and liver, where it controls a lot of digestive processes. Recent studies suggest the vagus nerve is related to a stronger immune system response and regulates your inflammation response to disease.

The vagus nerve is marked in yellow. © Wikipedia Commons

This makes the vagus nerve one of the great mind-body nexuses in the human nervous system. Every time you take a deep breath, your heart rate slows down. You see baseball pitchers do this on the mound—they breathe out to calm down, just before they start their windup. The vagus nerve controls that relationship, between the breathing and the calming.

We also show our undergraduates images intended to inspire pride—like Berkeley’s Sather Gate or the school mascot—and we find that the more pride they feel, the weaker the vagus nerve response. And that really astounds me. This result tells us that when you feel a strong vagus nerve response, you are feeling common humanity with many different groups. When we’re encouraged to feel strong identification with just our own group and not others, the vagus nerve dims.

We’ve also found people who have really strong vagus nerves—“vagal superstars,” as I like to call them. We find that these folks have more positive emotion on a daily basis, stronger relationships with peers, better social support networks. Fifth graders who have a stronger vagal profile are the kids who intervene when a kid is being bullied. They’re more likely to cooperate, and will donate recess time to tutor a kid who needs help on homework.

There are a lot of data that suggest we are wired to care, down to the neurochemical level. I’m sure many of you have heard about oxytocin, a neuropeptide that goes up to your brain and is then distributed through your body by your bloodstream. You probably know that breastfeeding mothers release oxytocin and so do men who are engaged in a good long smooch with their sweetheart.

But there are also new studies finding that it may induce altruism. If I give 10 dollars to study participants and squirt some oxytocin up their nose, they will share more of that money with a stranger than they would without the squirt. That’s why oxytocin has been dubbed “the moral molecule” by neuroeconomist Paul Zak.

How contagious is compassion?

And here’s the thing: Research suggests that those strangers who receive money will then be more likely to turn around and make their own gifts. Generosity is contagious. Kindness just spreads like wildfire.

Researchers Nicholas Christakis and James Fowler have been studying a community in Massachusetts, and they find that among adults, everything is contagious. If your neighbor goes on a diet, you go on a diet. If a person a couple of blocks away start smoking, other people start smoking, and you end up smoking. If you become angry, it spreads to your family and through social networks.

This might be because giving and sharing feel good. There are studies showing, for example, that if I share resources with you, I get a little activation in the reward circuit in my brain.

What’s more, there’s evidence that these good feelings promote bonding through social networks, even bridging social divisions. My lab has found that if you can get people to feel compassion, they start to feel deeply connected to very different groups. In particular, they feel like they are similar to and share a common humanity with people who are really in need, who are really vulnerable. Cultivating this feeling of compassion makes people more attuned to who is in need and enables more altruistic behavior toward them.

There’s one final, crucial social effect of compassion, and it goes back to Darwin and evolution. To pass your genes to the next generation, you’ve got to have qualities that make you attractive as a partner or, in evolutionary language, as a mate.

Well, researcher David Buss generated a lot of controversy when he surveyed 10,000 people from 37 different countries—heterosexuals at the age of forming romantic partnerships—and asked them: What is most important to you in a mate?

But there was another result that no one talked about, and it was this: Kindness was found to be the most important criterion for a mate, and the single universal requirement across these 37 countries. People are looking for kindness as a mating strategy.

So forget what you’ve been told about compassion—that it’s unnatural, that it’s for suckers. Compassion is essential to our evolutionary history, it defines who we are as a species, and it serves our greatest needs as individuals—to survive, to connect, and to find our mates in life.

Great point about kindness - I’ve heard quite a few scientists back up this assertion (Stephen Pinker being one of them). It makes sense.

Two questions though - the first never seems to get answered.

1. Isn’t the vagus nerve also found in amphibians? I think it’s called the pneumogastric nerve, but it’s the same thing.

2. Have you folks any response to Ed Yong’s shakedown of oxytocin in the media?

(Yes, I realize Dr. Zak addresses those points in his book; but shouldn’t caveats be emphasized to stress that science is complex rather than simple?)

One comment on terminology: you will note that Darwin uses the term ‘sympathy’. ‘Sympathy’ was the word used by all scientists and philosophers until recently. It is also used by Steven Pinker.

Pinker distinguishes between ‘empathy’ which are the involuntary reactions to the joy and suffering of others and ‘sympathy’, which is the whole complex of co-operative and altruistic behavior common to humans.

A person for instance working to improve the situation of a sick person may or not have mirror neurons firing at any given moment, but the behaviour is still ‘sympathetic’.

The word ‘empathy’ seems much more recent and more inexact.

> In fact, our babies are the most vulnerable offspring on the face of the Earth. And that simple fact changed everything. It rearranged our social structures, building cooperative networks of caretaking, and it rearranged our nervous systems.

That is really bad science: it is one explanation among many as to why humans are a very altruistic and co-operative species.

Note that none of this explanation (immature new borns) applies to Bonobos, who are possibly even more co-operative than humans.

It’s funny that you wrote about this I think about it a lot.I was raised Catholic and relaly believe in a lot of the moral lessons I learned from Christianity. However, for all intents and purposes, I am not an Atheist. Lots of people ask me what the point of living is and why I don’t go around doing horrible things if I don’t believe in god or consequences beyond this life I relaly just believe that the good feelings that come from doing good unto others and the knowledge that I’m spreading positive energy is enough to make me compassionate and want to do the right thing. I’m just a monkey who wants a hug, like the ones in that picture!