Everyday life is filled with events that evoke emotional highs and lows—like celebrating a friend’s birthday, getting cut off in traffic, or even stubbing a toe. Amid all these ups and downs, how do we remain clear-headed in our judgments?

Remarkably, feelings about one situation rarely color our first impressions of new people or situations that we encounter soon afterward. We seem to have a built-in regulatory mechanism to protect us from this “emotional spillover,” and a recent study published in the journal Psychological Science explored a specific brain area that might be responsible. 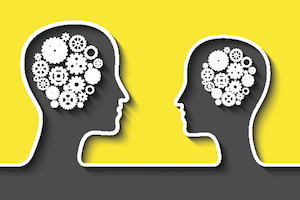 Researchers Regina Lapate, Richard Davidson, and colleagues at the University of Wisconsin-Madison recruited 27 people to have a part of their brain temporarily shut off. Specifically, the researchers used a technique called transcranial magnetic stimulation (TMS) to disable or “knock out” a brain region called the left lateral prefrontal cortex (lPFC).

This region is known to be involved in controlling our impulsive urges, like when we choose healthier food over junk food. Disruption of the lPFC, either by TMS or by brain damage, leads people to have less self-control and to be more influenced by their environment. Now the question was: Would disrupting the lPFC lead people’s emotions to cloud their judgments more than usual?

The researchers tested this by showing participants a series of neutral faces, each of which was preceded by a briefly flashed photo of a happy or a fearful face. These brief flashes have been shown to affect our feelings, so they served as a proxy for everyday life situations that evoke emotions. After seeing the neutral face, participants rated the likeability of this person on a 1-to-4 scale. Each participant rated 144 neutral faces: half while their lPFC was knocked out, and half while a control brain region was knocked out (to serve as a comparison).

As expected, emotional spillover occurred only when the lPFC was inhibited. In that case, participants found neutral faces that followed fearful faces significantly less likeable than those that followed happy faces.

The impact that this emotional spillover had on the participants’ first impressions of the neutral faces was profound—and, as it turns out, persistent.

Three days later, long after the TMS had worn off, participants were shown all the neutral faces they had seen in the experiment. For each face, they were asked, “How much do you like this person?” on a scale from ‘really dislike’ to ‘really like.’ Neutral faces that had originally followed fearful faces when the participants had their lPFC inhibited were once again rated as less likeable than other faces.

These results are the first to causally suggest that the lPFC, in conjunction with its connecting brain regions, plays an important role in emotion regulation. Its activity seems to allow our impressions of new people and experiences to be relatively unvarnished by the constant barrage of emotional stimuli we encounter every day.

However, emotional spillover isn’t an all-or-none phenomenon. Indeed, research suggests that people with anxiety or depression may have impaired lPFC function. The extent of emotional spillover also likely varies from person to person and by context. As the researchers write, “In everyday life, the magnitude of [emotional] spillover probably depends not only on an individual’s regulatory capacity and lPFC intactness but also on the intensity of the emotional event, the awareness of its influence, and the interval between emotional processing and subsequent events.”

The good news is that learning about how our brains regulate our emotional responses can suggest ways to strengthen this ability—and possible avenues for future research. Contemplative practices such as mindfulness meditation are particularly attractive possibilities, as there is already evidence that they can change how some parts of the brain respond to emotional stimuli.

In the end, this study may get us one step closer to limiting emotional spillover even further than the brain already does naturally, making sure we don’t miss out on a new best friend because of a still-throbbing stubbed toe.