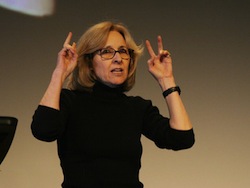 There’s no need for my wife to be jealous. I was working, you see—specifically, interviewing the bestselling author, Rutgers University professor, Match.com advisor, and Chemistry.com architect backstage at the Being Human festival on September 28 in San Francisco.

In her books Anatomy of Love, Why We Love, and Why Him? Why Her?, Fisher has explored how biology interacts with psychology and culture to help us pick our mates. In her Being Human presentation, Fisher explained the four basic personality types identified in her research:

Perhaps because I took her personality test and discovered I was an Explorer, I suggested to Helen that the usual Q&A format is getting stale. So we decided that I would sing and recite poetry to her—and then she would critique the lyrics through a scientific lens. Here are the results!

Love is not love
Which alters when it alteration finds,
Or bends with the remover to remove:
O no! it is an ever-fixed mark
That looks on tempests and is never shaken

Is that true? I mean, scientifically true?

Because when you’re deeply attached to somebody, you can say that kind of thing: It does not alter when it alternation finds; love overlooks it. In a deeply attached couple that is still deeply in love, they could say it and it could be real. And what’s going on in their brains is that the ventral pallidum—the brain region linked with attachment—is in full bloom, and the brain circuitry for the oxytocin system, and probably the vasopressin system, are going great guns.

As a girlfriend once said to me about her husband: “Sometimes I hate him, but I always love him.”

HF: Ah! That’s interesting. Romeo and Juliet is about romantic love, with its full-blown obsession. They’re willing to die for each other, for God’s sake. But the sonnets are not about that. They’re about attachment, which can withstand a little hatred.

JAS: Next up is the Beatles: “All you need is love, love is all you need.” True?

HF: Well, no. You need a nice glass of wine now and then. You need friends. You need interesting work. I guess he was talking about world peace or something.

HF: That’s true! People who marry for money earn it.

JAS:  Now I’d like to sing you some Tina Turner, if that’s OK.

True? Do opposites, in fact, attract?

HF: Depends on who you are.

If you are very expressive of the traits linked to testostrone, my research finds you will go for your opposite. Tough-minded does go for tender-hearted. And tender-hearted goes for tough-minded.

JAS: So you seem to be saying that people who are really gendered—really specialized in stereotypically male or female behaviors—will look for someone to make up for their lack.

HF: Yes. People high in testostone tend to be analytical, logical, direct, decisive, tough-minded, good at rule-based systems like math, engineering, computers, mechanics. Those people, the Directors, go for their opposite—the Negotiators. They go for someone who is high in estrogen: who sees the big picture rather than the details, who is very good with people, who is emapthetic. And sure enough, if you’re high in estrogen, you’re likely to go for the high-testostone. Those two go for what they don’t have. In those two cases, yes, opposites attract.

In the other two cases, similarity attracts. If you’re the high-dopamine type, the Explorer, you tend to be novelty-seeking, risk-taking, curious, creative, spontaneous, energetic—they go for someone like themselves. And if you’re high in serotonin, you tend to be calm, traditional, orderly, religious, respectful of authority—and, again, you’re likely to want somebody like yourself, another Builder.

So Tina Turner is half right and half wrong.

JAS: There are a lot of pop songs about people trying to figure out if a match is right for them. Take the Robin Thicke hit “Blurred Lines”:

I know you want it
But you’re a good girl
The way you grab me
Must wanna get nasty
Go ahead, get at me

He adds, poignantly, “I hate these blurred lines.” OK, it’s not Shakespeare. But the sentiment seems basically clear. Is she a good girl? Is she nasty? It could be that Robin Thicke is just an idiot. Can science help him?

HF: We very often say we want one thing but we really need another. You know, I work with Match.com as their chief scientific advisor, and they have found many men who say, “I want a tall, thin, blonde yoga teacher.” Then, BOOM, they fall madly in love with a short, fat industrial engineer.

JAS: So Robin Thicke secretly wants to date an engineer? That might really be good for him.

HF: Maybe. At Match.com, they’ve learned to try to give you want you want, but then they watch what you actually choose—and so many times you choose to go out with people who don’t fit what you asked for. So over time, Match.com will give you more of the type you actually connect with—more short, fat engineers.

It’s called your love map. It’s a conscious and unconscious list of what you’re looking for in a partner. Most of us can list the conscious things we want. But we can’t list the unconscious things, because we don’t know what they are. That’s often revealed in what we actually do. For example, my mother was very, very unpredictable. As a kid, I could never predict anything. And if I were to list what I’m looking for, I would never put down unpredictable. It would never dawn on me. But when I look at my men, I find a lot of them have been rather unpredictable. So we don’t know all the things we’re looking for.

JAS: That leads to my next question. In 1975, Captain and Tennille released “Love Will Keep Us Together.” Four years later, Joy Division sang, “Love Will Tear Us Apart.” Who was right? Does love keep us together or tear us apart?

HF: Both. In his poem, “Brown Penny,” Yeats wrote, “O love is the crooked thing.” And it is. For example, love will tear you apart if you fall in love with the wrong person. Let’s say you’re happily married, you just had a child, and you have a deep attachment to your partner, you really love and respect your partner—and all of a sudden you fall madly in love with someone at the office who is the wrong age, wrong education level, but you fall madly love. That will indeed tear you apart. Because it’s going to give you such ambivalence about what to do.

JAS: Many poems and pop songs would urge that guy to follow his heart. What do you advise?

HF: To think for himself. A lot of people in the world are scared of love. Traditionally, many Asian cultures regarded love as fickle and a threat to their system of arranged marriages. In the West, we love love. But we’re scared of sex and we overlook attachment. Instead, we’re madly in love with romantic love. We only see the upside of it, even though over 95 percent of us have been dumped and felt the excruciating pain.

JAS: One more quote, from Anaïs Nin… who’s never at a loss for thoughts about love.

HF: Nobody else is either. You should come to my house sometime. I have a whole wall of poetry books from all over the world, and they’re all about love. Mostly lost love! Or death.

JAS: Speaking of death, here’s what Anaïs has to say:

Love never dies a natural death. It dies because we don’t know how to replenish its source. It dies of blindness and errors and betrayals. It dies of illness and wounds; it dies of weariness, of witherings, of tarnishings.

HF: Poor girl. It’s a little bit like something George Bernard Shaw said: “When we want to read of the deeds that are done for love, wither do we turn? To the murder column.” Nin has captured the utter despair of rejection.

JAS:  Absolutely true, but she also seems to refuting this idea that love naturally declines over time. She’s saying that love wants to live and naturally persists, but we mess it up for ourselves.

We work at so many things. We pay attention to our friendships; we work to keep them going. We exercise to keep our bodies going.  We work to keep our jobs. But this is the big problem with the concept of “Until death do us part.” Too many people think that after the wedding, they can relax. But you can’t relax.

Love can die of a thousand cuts, but, likewise, we can keep it alive through a thousand small steps like these. That’s how you keep love going.