This week Greater Good editor-in-chief Jason Marsh is reporting on highlights from the recent Being Human conference in San Francisco, including a round-up of some of the key themes and speakers, and an interview on the evolutionary roots of altruism with Yale psychologist Laurie Santos. Today, we present an interview with neuroscientist V.S. Ramachandran on mirror neurons, the subject of his Being Human talk.

Did you ever have that sensation where you’re watching someone do something—serve a tennis ball, say, or get pricked by a needle—and you can just feel exactly what they must be feeling, as if you were in their shoes? 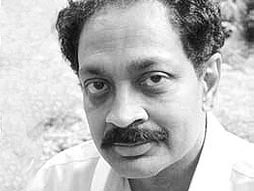 Scientists have long wondered why we get that feeling, and more than two decades ago, a team of Italian researchers thought they stumbled on an answer. While observing monkeys’ brains, they noticed that certain cells activated both when a monkey performed an action and when that monkey watched another monkey perform the same action. “Mirror neurons” were discovered.

Since that time, mirror neurons have been hailed as a cornerstone of human empathy, language, and other vital processes. But there has also been something of a mirror neuron backlash, with some scientists suggesting that the importance of mirror neurons has been exaggerated.

V.S. Ramachandran has been one of mirror neurons’ most ardent scientific champions. Ramachandran (known as “Rama” to friends and colleagues), a distinguished professor of neuroscience at the University of California, San Diego, conducted early research on mirror neurons; he has since called them “the basis of civilization” in a TED talk and touted their significance in his recent book The Tell Tale Brain.

In his presentation at Being Human, Ramachandran discussed how research on mirror neurons and “phantom limbs” suggests an extraordinary human capacity for empathy. (See this post for more details.)

After his Being Human talk, I sat down with Ramachandran to discuss what we know—and what we don’t—about these celebrated brain cells. Below is a condensed version of our conversation.

Jason Marsh: First, could you explain a little bit about what mirror neurons are and how they were discovered?

V.S. Ramachandran: Well, basically Giacomo Rizzolatti and Vittorio Gallese and some of their colleagues in Italy discovered mirror neurons. They found these neurons in the frontal lobes of the brain—the pre-frontal areas of the brain—among what were originally found as motor command neurons. These are neurons which fire when I reach out and grab a peanut, another set of neurons which fire when I reach out and pull a lever, other neurons when I’m pushing something, other neurons when I’m hitting something. These are regular motor command neurons, orchestrating a sequence of muscle twitches that allow me to reach out and grab something or do some other action.

A subset of these neurons also fire when I simply watch another person—watch you reach out and do exactly the same action. So these neurons are performing a virtual reality simulation of your mind, your brain. Therefore, they’re constructing a theory of your mind—of your intention—which is important for all kinds of social interaction.

VR: Well, people have asked me that already, and I don’t know much about it. All I know is they are involved in empathy for, say, touch or a gentle caress or pain.

For example, pretend somebody pokes my left thumb with a needle. We know that the insular cortex fires cells and we experience a painful sensation. The agony of pain is probably experienced in a region called the anterior cingulate, where there are cells that respond to pain. The next stage in pain processing, we experience the agony, the painfulness, the affective quality of pain. 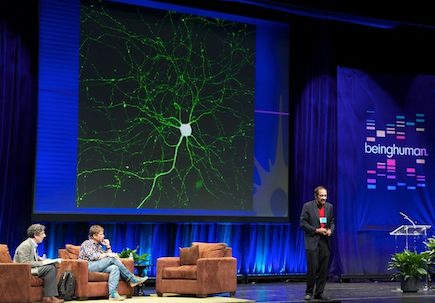 Ramachandran speaking at Being Human.

So these [mirror] neurons are probably involved in empathy for pain. If I really and truly empathize with your pain, I need to experience it myself. That’s what the mirror neurons are doing, allowing me to empathize with your pain—saying, in effect, that person is experiencing the same agony and excruciating pain as you would if somebody were to poke you with a needle directly. That’s the basis of all empathy.

JM: Just to clarify: When you talk about mirror neurons and non-mirror neurons, what percentage are you talking about?

VR: Between 10 and 20 percent [are mirror neurons]. For motor neurons, I think it’s a higher percentage—maybe about 20 percent. For sensory neurons, it’s about 10 percent. But these numbers are not all that accurate.

VR: Well, [mirror neurons] enable me to see you as an intentional being, with purpose and intention. In fact, we suggested nearly a decade ago that mirror neuron dysfunction may be involved in autism. People with autism, ironically sometimes they mimic constantly what you’re doing, but it’s also true that they’re bad at imitation and they don’t have empathy, they don’t have a theory of mind, they can’t infer your intentions, they don’t engage in pretend play. In pretend play, what I do is temporarily say, “I’m going to be this superhero,” so you do role play. That requires a theory of mind.

So take all the properties of mirror neurons, make a list of them, and list all the things that are going wrong in autism—there’s a very good match. Not every symptom, but many of the symptoms match beautifully. And it’s controversial: There are about seven papers claiming that it’s true, using brain imaging, and maybe one or two claiming that there’s no correlation [between mirror neurons and autism].

JM: From your perspective, what do you think are some of the biggest misconceptions around mirror neurons—speculations that have yet to actually be validated by science?

VR: Well, I think as with any new scientific discovery, initially people are very skeptical. When people discovered that these neurons do exist, and that they exist in humans, then people went overboard and said they do everything. And I myself am partly responsible because I made this playful remark, not entirely serious, that mirror neurons will do for psychology what DNA did for biology and open up a whole new field of investigation. Turned out I was right, but it’s overdone—I mean, a lot of people, anything they can’t understand, they say it’s due to mirror neurons.

JM: And what are some of those things that people attribute to mirror neurons that we don’t yet know to be true?

VR: Well, I think my own theory about autism hasn’t been proven. It’s a plausible theory—it’s better than any other theories that are out there—but it still has not been proven. But the popular person latches onto it and says that autism’s caused by mirror neuron deficiency.

JM: Right, and that’s what culture’s about—the transmission of those learned skills.

VR: Exactly. That’s one of the proposals I made on the Edge website in an essay I published 10 years ago. But if that were true, it they were responsible for all that transmission of skills and culture, monkeys should be very good at those things because they have mirror neurons.

So clearly mirror neurons provide the substrate [for those skills], and maybe there are more sophisticated mirror neurons in humans than in monkeys, but they’re not by themselves [responsible].

Those kinds of errors are quite common, but that’s okay.

VR: It’s how science progresses. People make overstatements, and then correct them.

Thank you for this rich article, Jason! And for your site in general, which I’ve only now just discovered, and look forward to diving into more deeply when I have some spare moments. “The Science of a Meaningful Life” is of great interest to me.

I’ve just published the book “Parenting for Peace: Raising the Next Generation of Peacemakers,” whose basic premise is, if we’re going to change the world for good, we need to raise a generation hardwired with certain neural capacities, right from the beginning… even before conception. Capacities such as, indeed, empathy. As well as self-regulation, trust, intellectual & emotional flexibility, imagination. You get the idea. And of course it all emanates from us, the parents, the adults.

I’d love to have my publisher send you a copy if you’d care to have a look and perhaps consider reviewing it or highlighting it as a resource on your site. From the size of “Parenting” in your tag cloud you must cover the territory. I somehow think you’ll like it. (And whew—I’m feeling relieved right now that in my book I did not overstate the case for mirror neurons.)

Unfortunately, Ramachandran’s speculations about mirror neurons are some of the most fantastic and least “scientific”. He has theorized that mirror neurons are responsible for everything from empathy to the evolution of human culture. There is virtually no scientific evidence to back up such claims. Scientists such as Simon Baron-Cohen (Cambridge University), Cecilia Heyes, (Oxford University) and Greg Hickok (UC Irvine) have all taken Ramachandran to task for his wild speculations but so far the public appears to be more interested in Ramachandran’s science fiction accounts of mirror neurons than the actual research that has been done. You should read up on the research that has been done and update your blog with more accurate information on the subject of mirror neurons.

I’ve just published the book “Parenting for Peace: Raising the Next Generation of Peacemakers,” whose basic premise is, if we’re going to change the world for good, we need to raise a generation hardwired with certain neural capacities, right from the beginning… even before conception. Capacities such as, indeed, empathy. As well as self-regulation, trust, intellectual & emotional flexibility, imagination. You get the idea. And of course it all emanates from us, the parents, the adults.

I’d love to have my publisher send you a copy if you’d care to have a look and perhaps consider reviewing it or highlighting it as a resource on your site. From the size of “Parenting” in your tag cloud you must cover the territory. I somehow think you’ll like it. (And whew—I’m feeling relieved right now that in my book I did not overstate the case for mirror neurons.)