Students of color are suspended at disproportionately higher rates than white students and, on average, perform more poorly on standardized tests. But no peer-reviewed nationwide research has documented a link between the two disparities—until now. 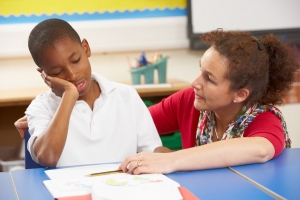 A new Stanford-led study published in AERA Open finds that an increase in either the discipline gap or the academic achievement gap between black and white students in the United States predicts a jump in the other. Similarly, as one gap narrows, so does the other.

“Prior research has suggested that achievement gaps and discipline gaps may be two sides of the same coin,” said Francis Pearman, an assistant professor at Stanford Graduate School of Education and lead author of the study. “This is the first study to document this relationship at the national level.”

Past studies have provided evidence of racial disparities in both school discipline and academic achievement, and for decades, researchers have attempted to shed light on the causes and outcomes of each of these gaps, said Pearman. “But it wasn’t until recently that people started talking about these gaps as potentially being related to one another.”

Previous research in this area, however, has never documented a link between the two gaps at a national level.

“The most influential work in this space has largely been conceptual—drawing on existing literature to make a theoretical argument for a link between the racial discipline gap and the academic achievement gap,” said Pearman. “Or it’s been local, looking at whether a relationship between the two gaps exists within a given school district.”

To study whether these theoretical arguments and local findings held nationwide, Pearman and his coauthors analyzed disciplinary and achievement data for students in third through eighth grade in school districts across the United States for the 2011–12 and 2013–14 school years.

Achievement data came from the Stanford Education Data Archive, a massive collection of 350 million test scores from third- to eighth-grade students at every public school in the United States. (In September, this data archive became more widely accessible to the public through the Educational Opportunity Project at Stanford University, which supports work to reduce educational disparities.)

Disciplinary data came from the U.S. Department of Education’s Civil Rights Data Collection, and sociodemographic information on school districts came from the Common Core of Data and the American Community Survey.

An increase in the achievement gap between black and white students also predicts a larger-than-average discipline gap, the researchers found. Their study is the first to examine the relationship in both directions.

The researchers also saw a significant association between the Hispanic-white achievement and discipline gaps. But they were surprised to discover that other factors—such as local poverty and education levels—accounted for the relationship. Once they controlled for these differences at the community level, the relationship between the two gaps disappeared.

“This suggests that the mechanisms connecting the achievement gap to the discipline gap, such as teacher biases and feeling isolated at school, may be most salient for black students,” Pearman said.

Implications for educators and parents

By establishing a relationship between the two gaps at a national level, the research holds particular implications for school administrators, teachers, and parents.

“Our findings should caution against such moves,” he said, because curtailing efforts to address discipline disparities could exacerbate the achievement gap.

Pearman also advises parents, teachers, and school leaders to pay attention to disparities at their child’s school. “If your district has higher suspension rates for students of color than it does for white students, it’s likely that it is also failing to meet the academic needs of its students of color as well as it does its white students,” he said. “Similarly, if your district is struggling to meet the academic needs of students of color, then it will likely have a racial discipline problem.”

Efforts targeted at closing one gap could have the indirect consequence of narrowing the other, he said.

For instance, educators might adopt ethnic studies programs and culturally relevant teaching to alleviate achievement disparities—efforts that could address the racial discipline gap, as well. Using non-punitive discipline practices such as positive behavior interventions and supports, instead of practices that exclude students from school, could also help raise the academic achievement of racial and ethnic minority students.

“These efforts are each targeted toward a particular end,” said Pearman, “but it is possible that they may have crossover effects.”