Vladimir Putin took a psychologically astute step last year, almost certainly in preparation for last month’s invasion of Ukraine. In April of 2020, he finalized an amendment to Russian law that allowed people of former Soviet republics to become dual citizens of both Russia and their current country. 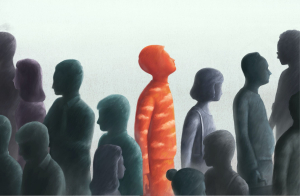 Nearly 30% of Ukrainians speak Russian as their first language. Putin knew about the importance of making a sizable subset of Ukrainians feel as if they could be part of something larger and more powerful. By giving them citizenship, Putin could be forcing some Ukrainians to manage an uncomfortable dissonance about their identification with both Russia, the invader, and Ukraine, the invaded. The dual identity could make it a little bit harder for Ukraine to fight back against Russian forces.

We all contain multiple identities, with those identities vying for primacy in our heads. Outside of our heads, different groups jockey for importance in our lives—and sometimes even demand the top spot. That includes companies that try to make their brands part of who we are (are you Apple or PC?); musical styles that incorporate lifestyles (are you a mod or a rocker?); and political parties that turn personal choices into litmus tests (do you own a gun or a Prius?), not to mention all the usual claims to racial, gender, and national in-group loyalty.

The consequences can be severe when a group deems us disloyal, since human beings use their groups to allocate resources like housing and welfare support, and even emotional resources like empathy and compassion. In wartime, deciding which identity claims your loyalty can be a matter of life and death, as the invasion of Ukraine illustrates too well.

And yet, there is quite a bit of evidence that the world would be a better, more peaceful place if we could hold space for different identities in ourselves and in other people. How can you do that, while resisting efforts to elevate one over all the others in situations of conflict? Here are some research-based tips.

1. Look at behavior, not rhetoric, in yourself and others

For generations, wealthy American politicians have postured as “one of you,” while pursuing policies that mainly benefited a small number of other wealthy people. People march in public for racial or gender equality while privately behaving in ways that widen racial and gender inequality.

That won’t be news to most readers—but it should serve as a reminder that things are seldom as simple as they might appear to be. Becoming a Christian will not make you free of sin; calling yourself a progressive doesn’t mean your every word or action leads to progress. People who claim that joining a group will put you on the road to utopia have, at best, not lived long enough to be chastened by human messiness; at worst, they’re actively manipulating you into doing things that might not be in your best interest.

The bottom line is that we are all complex individuals, containing sometimes-conflicting identities and impulses that can result in behavior that contradicts what comes out of our mouths. That’s normal—and it’s OK. While there might not be one group you can join that will solve all the problems in your life and the world, you can gain enormous richness from a complex social life that embraces multiple identities.

You can be a Christian and a progressive; a New Yorker and an American; you can be progressive Christian American in New York—and so can other people. How those multiple identities come together in shaping our decisions and behavior is what makes life interesting!

2. Resist the lure of superficial commonalities

We’ve all been there. You’re strolling down the street feeling cool in your pink Chuck Taylors when someone walks by with the exact same pair—and you feel instant kinship with that person. You’re part of the same club!

There’s nothing wrong with feeling that way; delight in random commonalities is a rather charming part of human social life. But in serious discussions, we all need to be wary of commonalities irrelevant to whatever topic is on the table.

Whether or not you want to acknowledge it, you likely prefer people who are similar in personality, education, intellect, interests, and demographics to you. But just because someone listens to the same music you do doesn’t mean their opinions on the war in Ukraine or gas prices are more valid than those of someone who listens to music you hate.

That’s why we need to separate likability from credibility, and watch out for bias within ourselves for random in-groups and against random out-groups.

3. Do you feel compelled to lie or mislead other people?

The invasion of Ukraine has triggered an information war in which both sides are circulating falsehoods in memes and fake news stories. Indeed, lies are as much a part of war as violence. Even images that start as something truthful can be unintentionally distorted by a global game of telephone, evolving in meaning as they are shared again and again on social media.

The real test for individuals comes when the falsehood is revealed. Do you own the fact that you shared a false meme on social media and then issue a correction—or do you double down by saying, for example, that the meme “could be true,” out of a sense of loyalty to an identity or cause? Psychologists call this tendency “blue lies”: falsehoods, told on behalf of a group, that can strengthen the bonds among the members of that group—which are sometimes repeated out of fear of being kicked out of the group.

We all feel intense “social pressure to think and act in ways that are consistent with important group identities,” three political scientists write in a 2017 paper summarizing research into political lies.

When your group membership is predicated on embracing lies or half-truths, especially about other groups, that’s a major warning sign. When you feel that compulsion to go along with a lie to go along with the herd, it’s good to remind yourself that you are not the group and the group is not you—and that you might need to find what is true and accurate in the space between groups.

4. If the focus is on hatred of outsiders, ask questions

Groups do face communal threats. Russia really is invading Ukraine right now. When Ukrainian president Volodymyr Zelenskyy says that Russia’s attack on a nuclear plant is “terror of an unprecedented level,” that’s grounded in reality, even if you find yourself thinking of precedents.

But not all threats are as serious as demagogues might claim; some might be completely imaginary. Power-hungry leaders know that fear is a very powerful tool of manipulation. That’s why Hitler mobilized fear against Jews; it’s why Slobodan Milošević turned ethnic Albanians into a threat against Serbs, aiding his rise to power in post-communist Yugoslavia.

How do you know when fear is being misused?

First, you must name the emotion and acknowledge that what you heard has made you feel afraid. Observe that fear without judgment, but perhaps ask yourself some of these questions: Is my fear of a whole group of people or is it of specific acts? Is it a threat to me, personally? What evidence for the threat exists? Is there other evidence that suggests they are not a threat? What identities do we have in common? Can I find other things in common with them that would reduce the threat? What goals might we share? How can I replace fear with courage? What would a courageous response to this potential threat look like?

You might find that fear is signaling a real threat; you might discover that the fear is baseless. Either way, a little introspection will always help you to avoid being manipulated.

5. Treasure multiple identities, in yourself and others

By identifying with a group, you will feel pressure to behave in particular ways, and you’ll find yourself supporting norms that are common and widely accepted by that group. But most of us don’t identify with just one group, and that’s healthy. We contain multitudes, with norms and values that will sometimes come into conflict with each other—and yet still combine to make us who we are.

If a strong group identity is activated by, say, the Super Bowl or out-of-town visitors, you will notice an alteration in someone’s personality. On Saturday, you might find a friend from New York City swearing, talking fast, and teasing as a sign of affection—and then, in church on Sunday, suddenly become quiet and deferential.

Researchers have found that upon identifying with a social group, even basic pleasures such as the taste and smell of foods are different. If reminded of their roots, people from the American South will find foods representative of the South, such as grits, taste better than foods linked to other regions, such as pizza. Participants reminded of their Switzerland identity found the smell of chocolate to be more intense than foods from other regions, like popcorn. Can you like grits and pizza, chocolate and popcorn? Of course you can. People can and do flexibly shift from one identity to another—but that doesn’t mean that one is inauthentic.

What’s true for you is true for others, as well, and it pays to be curious about multiple identities in both yourself and others. With many selves, there is no single perspective from which to view or react to other people and particular experiences. Instead of fearing this complexity and trying to simplify ourselves and each other, we can adopt a sense of wonder about the multitudes we contain.

It’s good to remember that identity shifts depending on whatever group is primed to be important to us, in the moment. If you’re at the playground with your kids, your sense of self is linked to the social role of parenting among other parents. If you’re an immigrant and attend an international food festival, you’ll feel strong ties to those roots. When taking a bike ride, you might identify as part of the cyclist community; if you surf, you might say things to other surfers like “those red barrels are gnarly.” There will be times when you need to join with other parents to advocate for common interests; there may come a day when you join up with other cyclists or surfers for a personal cause.

All of these identities—spanning social roles, interests, strengths, talents, and values—make up who we are.

You can use that insight as a way to connect and respond to the common humanity of others, even with people who at first seem like outsiders. We have the ability to break an “us” versus “them” mentality by appreciating the vast number of social categories that exist. Maybe you don’t surf—so you might connect over parenthood. If you’re not a parent, you could have surfing in common.

Beyond moments of individual connection, studies suggest that a group can make better decisions by embracing people who are different and encouraging members to embrace identities that exist beyond the self. Whether in Ukraine or anywhere else in the world, nobody possesses an identity limited to nationality. If we can see multiple identities as multiple opportunities instead of threats to unity, we might find ourselves more likely to turn away from prejudice—and less likely to go to war.