People tend to do what others around them are doing. Walk onto an elevator and almost everyone stands facing forward. People in conversation tend to match each other’s speech rate, and even the pitch of their voices. 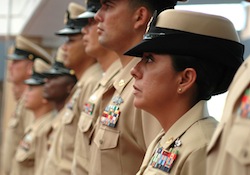 The judgments made by a group also tend to converge. The classic version of this conformity effect comes from studies by Solomon Asch first conducted in the 1950s. Participants were members of a group who were judging the length of lines. On some trials, the group made judgments that were wrong by a large margin. When participants judged the length of that line again in the future, they generally biased their judgment in the direction of the group, even though they thought the group was probably wrong.

Social forces influence people’s judgments. People want to belong to a group, or want to avoid disagreeing with others, and so they modify their judgments to fit in more with what the group says. Diana Kim and Bernhard Hommel suggest in the April, 2015 issue of Psychological Science that these conformity effects may also arise naturally from the way that people represent the events that go on around them.

This pattern of ratings for the second pass through the pictures reflects a conformity effect: Just seeing numbers did not produce a conformity effect; when they just saw numbers after each face, there was very little impact on the second ratings of the faces. Seeing the hand proved to be the key.

In another study, participants rated faces and saw numbers after each one, but now they were told that those numbers were the average rating for that photo by students at their university. In this version of the study, there was a conformity effect, but the margin of the influence of these numbers was smaller than what was observed in the study with the videos.

When people explicitly represent the actions of another person (such as the video of the hand), that creates something that looks like the classic conformity effect. The effects of watching another person performing an action is at least as strong as finding out the judgments of another group of people.

Many of these results may reflect the memories people have of other people’s actions, because those memories both involve areas of the brain responsible for action planning. At first, it might seem strange that people would confuse their own actions with the actions of others. Only recently in our evolutionary history would it matter whether our memories reflected something we did ourselves or something we observed. Culturally, we care a lot about assigning blame to particular individuals for actions. For most other species, though, it does not matter in the long run whether particular animals have detailed memories of exactly who performed what action in the past.