It’s a puzzle: Average Americans aren’t especially ideological, but our political polarization is intense and growing. If we’re not driven by fierce convictions, why the disdain for the other side?

New research provides an unsettling answer. While most people aren’t all that invested in public policy, we are all driven by a deep impulse to divide the world between “them” and “us.” We instinctively identify with one side of the political divide, and view the other as the enemy. 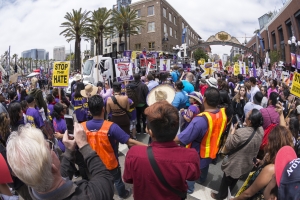 Opponents of Donald Trump confront Trump supporters at a rally in San Diego, California, in 2016.

“Americans are dividing themselves socially on the basis of whether they call themselves liberal or conservative, independent of their actual policy differences,” argues political psychologist Lilliana Mason of the University of Maryland. The roots of today’s political polarization, she writes, “are largely based in our social attachments to ideological labels, not only to thoughtful collections of opinions.”

This realization helps explain the long-running frustration of liberals that the public’s preferred policy prescriptions, which tend to lean leftward, are not reflected in the politicians we elect to represent us. That can be attributed to the fact one can hold generally liberal views and still identify as a conservative—and vote accordingly.

Mason, author of the new book Uncivil Agreement: How Politics Became Our Identity, discusses this disconnect in the journal Public Opinion Quarterly. She notes that social identity “fills two basic psychological needs—one of inclusion (being part of a group) and one of exclusion (distinguishing oneself from others).”

This “us vs. them” mentality develops in early childhood; Stanford University biologist Robert Sapolsky calls it “a fundamental fault line in our brains.” It can play out in relatively benign ways, such as the sense of belonging created when you identify as a Yankees fan (and therefore an opponent of those notorious Red Sox).

But the terms “liberal” and “conservative” can similarly confer a sense of group identity, along with the assumption that your group is inherently more virtuous. That makes politics very personal, and compromise very difficult.

Mason analyzed data on 2,500 Americans that was collected in August of 2016 using a national sample. Participants were asked about their attitudes toward six issues, including immigration, gun control, and abortion, as well as questions designed to measure the extent to which their ideology served as a pillar of their personal identity.

These included “How important is being a liberal/conservative to you?” and “When talking about liberals/conservatives, how often do you use ‘we’ instead of ‘they’?” Respondents also noted how willing they would be to befriend, marry, or hang out with a member of the opposing ideological group.

Confirming previous research, Mason discovered that both liberals and conservatives “hold issues positions that are generally on the left-leaning end of the spectrum.” Liberals, not surprisingly, tended to support leftist policies, but conservatives failed to provide a mirror image. Instead, on hot-button policies, they were very close to the center of the scale—which means they held positions very different from those of today’s Congressional Republicans.

In other words, Hillary Clinton supporters were “consistently left-leaning,” while Donald Trump supporters were far less consistently right-leaning. “However,” Mason adds, “both groups of voters were equally attached to their ideological identity.” Being a liberal or a conservative helped define who they were—even if they were fuzzy on what those labels actually stood for.

The effects of this are felt far beyond the voting booth. Mason reports that—actual issue positions aside—the stronger you identify with an ideology, the more you prefer marrying, or being friends with, a fellow partisan.

“It is the ‘otherness’ of ideological opponents, more than issue-based disagreement, that drives liberal-vs.-conservative rancor,” Mason concludes.

“This is likely to lead to a less compromise-oriented electorate,” she adds. “After all, if policy outcomes are less important than team victory, a policy compromise is a useless concession to the enemy.”

Unless we somehow forge a unifying national identity, America will be vulnerable to demagogues like Trump who instinctively know how to exploit this destructive divide.

This story originally appeared as “Ideology Isn’t Really about Issues” on Pacific Standard, an editorial partner site. Subscribe to the magazine in print and follow Pacific Standard on Twitter to support journalism in the public interest.