Sooner or later, everyone fails at something. But does everyone learn from their failures? In fact, the evidence suggests that most people struggle to grow from mistakes and defeats. 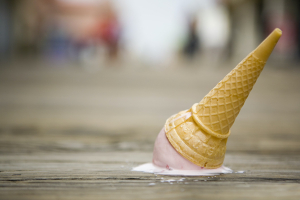 When researchers Lauren Eskreis-Winkler and Ayelet Fishbach developed the “Facing Failure” game, they wanted to test how well people learn from failure. The game consists of successive rounds of multiple-choice questions, where feedback from earlier rounds can help you perform better in later rounds—and getting more correct answers means making more money.

However, across many different studies, the researchers have consistently found that people “underlearn” from failure in the game. In fact, people continue to not learn from errors even as the incentives to do so increase.

“Even when participants had the chance to earn a learning bonus that was 900% larger than the participation payment, players learned less from failure than success,” they write. It’s a result echoed by other studies. The “ostrich effect” describes the tendency for investors to stop checking their stocks when market value tumbles—whereas they’ll compulsively do so when things are going well. One 2012 study found that novices often avoid negative performance feedback.

Why do people avoid the lessons of failure? That’s the question Eskreis-Winkler and Fishbach explored in a recent paper published by Perspectives on Psychological Science. They find a host of emotional and cognitive obstacles to learning from failure—and they provide concrete steps to overcoming them.

Failure bruises the ego, that metaphorical seat of our self-esteem and self-importance. When we fail, we feel threatened—and that sense of threat can trigger a fight-or-flight response.

“Fight” in the context of failure looks like wholesale dismissal of the value of the task, or criticism of the people involved or the unfairness of the situation you faced. However, “flight” might be the more common response to failure. When we flee failure, we disengage our attention from the task that threatens our sense of ourselves as effective people.

In a series of six experiments published in 2020, Hallgeir Sjåstad, Roy Baumeister, and Michael Ent randomly assigned participants to receive good or bad feedback on a cognitive test or academic performance. They found that participants who initially failed at a task predicted that succeeding in the future would make them less happy than it actually did—and they tended to dismiss the goals of the tests. The researchers coin the term “sour grapes effect” to describe this kind of response.

How do we make failure less threatening to the ego? Research offers a few suggestions.

Observe other people’s failures. In their paper, Eskreis-Winkler and Fishbach propose removing the ego from failure as much as possible by looking at other people’s failures first, before you take on a task yourself. In one of their studies, half of participants got lessons from other people’s negative results in the Facing Failure game before playing it themselves—and learned more from those failures than they did from their own. In other words, when you set out to learn out to ski, it will probably help to watch YouTube videos about common mistakes, before you hit the slopes yourself.

Get some distance. If negative emotions are getting in the way of your understanding, they also suggest trying self-distancing techniques. This involves thinking of your personal experience from the outside perspective of a neutral third party, asking, “Why did Jeremy fail?” instead of “Why did I fail?” While that might sound cheesy, it seems to work. As Amy L. Eva writes in Greater Good:

According to research, when people adopt a self-distanced perspective while discussing a difficult event, they make better sense of their reactions, experience less emotional distress, and display fewer physiological signs of stress. In the long term, they also experience reduced reactivity when remembering the same problematic event weeks or months later, and they are less vulnerable to recurring thoughts (or rumination).

It may also help to write about the failure in the third person or from the point of view of a future self who is looking back on the failure.

Share your own failure story. People tend to hide their own failures, out of a sense of shame, but there are ways to turn failure into success by transforming it into a story of growth.

In a series of 2018 and 2019 studies with Angela Duckworth, Eskreis-Winkler and Fishbach asked people to turn failures in different domains like work, fitness, or school into inspirational stories for others. This often fueled success down the line. High school students who shared failures with middle school students went on to get better grades than those who didn’t reframe their failures; middle schoolers who gave advice to elementary school students later spent more time on homework.

How can adults apply these insights to real life? If you’re a manager, for example, consider sharing your mistakes with employees in helping them improve their own performance—which will help them (as well as you) learn from failure.

Recognize your successes. There are other ways to shore up your own ego. Studies consistently find that experts are better able to tolerate failure in their fields, in part because they have a past history of accomplishment and future predicated on commitment.

In a 2014 experiment, seventh-grade teachers paired constructive criticism with encouraging notes that reminded students of the ability and skill they’d already demonstrated in class, which led to better grades in the future. Studies suggest teachers can also reframe failure as success by making learning the goal, as one 2019 study found.

This insight can obviously be applied to the workplace, as well: Managers can take steps to build up the egos of employees in feedback, by reminding them of how far they’ve come. They can also make learning one of the goals of any project, to encourage progress away from any missteps.

Feel the disappointment. If all else fails, try just feeling sad over your mistakes and defeats. There is a great deal of research suggesting that sadness evolved as a response to failure and loss, and that it exists in order to encourage us to reflect on our experiences. Sadness seems to improve memory and judgment, which can help us to succeed in the future; regret can actually sharpen motivation. When children reach the developmental stage when they can experience regret, suggests one 2014 study, they’re more likely to learn more from failure.

Beyond the emotional challenge to our ego, failure also presents a cognitive challenge, meaning that information from failure can be harder to process than successful experiences. “Whereas success points to a winning strategy, from failure people need to infer what not to do,” write Eskreis-Winkler and Fishbach.

In a complex 2020 experiment, they presented participants with three boxes, each containing an imaginary large success, a moderate success, and a small failure, with real monetary awards attached to each choice. They structured the game so that the rewards would be greatest with choosing the failure scenario, because the failure contains better information: “Learning the location of the losing box statistically raises a player’s winnings more than revealing the location of the moderate win, because knowing to avoid the failure guarantees a larger gain.”

It’s not too hard to see what’s going on in experiments like those: Ego aside, we all need to make a realistic assessment about whether a task is worth our time and effort. Initial failure sends a signal that a task might not provide a return on investment; thus, we naturally bend in the direction of success, even when the success story has nothing to do with us. So how do we get our brains to pay more attention to the lessons that come from failure?

Focus on the long-term goal. Often, we need to ask ourselves: Will my failures lead to rewards down the line? That’s why goals and commitments are important for overcoming the cognitive barriers to learning from failure. Holding a clear long-term goal in mind—such as becoming a doctor or learning to sail—can help us to tolerate short-term failure and override information-avoidance.

Practice mindfulness. “There is yet another reason failure often contains superior information: failure violates expectations,” Eskreis-Winkler and Fishbach write. Because people almost never intend to fail, failure can be surprising, which has the happy effect of waking up our brains—and a brain that is awake learns more than a brain that’s sleepwalking. When you feel surprised by failure, take that as a signal to be mindful and to sit with it rather than ignoring it. Indeed, multiple studies suggest that practicing mindfulness—that is, cultivating nonjudgmental awareness of thoughts and experiences—can help you to grow from failure.

Reflect on the lessons you learned. Because failure requires more interpretation and thinking than success if we’re to learn from it, Eskreis-Winkler and Fishbach suggest reducing mental loads as much as possible in its wake.

In one version of their Facing Failure game, the researchers highlight lessons from failure: “TAKE NOTE: there were only two answer choices to the question. Based on the feedback above, you can learn the correct answer! It is whichever choice you did not select initially.” You can do this on your own by distilling lessons into notes for yourself: “I failed at my math test because I didn’t study long enough. Therefore, I need to study longer—at least four hours!”

Do less. Finally, they suggest increasing our capacity to learn by engaging in fewer tasks that present opportunities for failure. In other words, if you’re learning to do something hard, you might need to prioritize that ahead of other, easier tasks, simply taking one thing at a time. Repetition helps, too. In other words, practice makes perfect—or at least good enough.

Practice self-compassion. Many people believe that they should be hard on themselves in the wake of failure; after all, how else would you grow? In fact, many recent studies suggest that you’re more likely to grow if you speak kindly to yourself, as a loved one might speak to you, in the wake of failure.

Along with self-kindness, there’s another component of self-compassion worth mentioning: common humanity. This is the awareness of our connection with other people and the universality of human experience. Failure is one of those human experiences, because it’s inevitable. It’s not a question of if you’ll fail—it’s when. The only real question you need to answer is what you can learn from the experience.

Well, there might be one more question to ask yourself: whether to keep the failure to yourself or turn it into a lesson for others. That can be scary, but, as Eskreis-Winkler and Fishbach argue, “The information in failure is a public good. When it is shared, society benefits.”