Right now, all over the world, people are making impossible decisions. Ones that someone—somewhere—will hate, regardless. Whether to mandate vaccines or masks. Whether to reopen offices. Whether to laugh or cry. There is not always an obvious right answer, but decisions still need to get made. 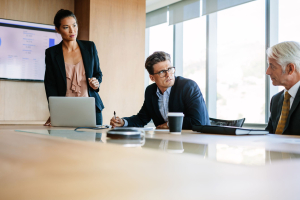 So what then? In this moment, how you make and communicate decisions matters more than ever. With all the swirling anxiety and frustration in the air these days, it’s easy to become a target of convenience for a whole lot of rage.

This is what John (not his real name), a superintendent of a school district in California, discovered the hard way. After a year and a half of making impossible decisions, and becoming enemy No. 1 for some of his teachers and their union leader, he is facing a new school year—and newly impossible decisions.

Back when the pandemic began, schools had to figure out how to go virtual, which was messy. When John saw the grades for that first virtual semester, it just about broke his heart. “That was probably the lowest point for me,” he told me. Many kids were not learning at anywhere close to the rate they had been in person. Latino kids and students with disabilities were failing at more than twice the rate of other kids.

Then last spring, when the caseload finally dropped and teachers were able to get vaccinated, John wanted to reopen schools. And so did a lot of parents. But many of the teachers disagreed. “There was one conversation I had with the small group of teachers, and one of them made a comment to the effect of, ‘If you make us come back, and someone gets sick and dies, the blood is going to be on your hands.’”

Impossible situation, right? Well, yes. And no. To offer John some advice, I invited him to join me on Slate’s How To! advice podcast alongside Gary Friedman, the world-renowned conflict mediation guru. Friedman has recent experience with making unpopular decisions—as an elected official in his own town. And he made plenty of mistakes, as he freely acknowledges. But he got a lot better at it, and here’s what he’s learned.

1. Let them see you sweat

In positions of authority, people usually put on a game face whenever they make an unpopular decision. They don’t want to show vulnerability. But this is a mistake, Friedman said. It makes you easier to demonize.

If, on the other hand, you do the counterintuitive thing—if you admit that this was a hard decision to make—you become human again.

“When people see you actively working with them, and not just on a cognitive level, but on an emotional level,” Friedman said, “it’s very hard to kind of push you away and say, you know, ‘This guy doesn’t care.’”

To John, the prospect of revealing his own struggle was mostly terrifying. “The scary part is that it [could] just make more fodder for attack,” he said. An understandable worry. Friedman suggested he start with one small admission of genuine feeling—and see what happens.

You will still get blamed by some people, no matter what you do. The trick is to avoid getting pulled into high conflict—even in your own mind. How? You need some way to get a little distance from the conflict, every day.

For Friedman, this means writing in a journal and meditating. For John, it means praying and journaling (and sometimes eating too much). For me, exercise also helps a lot. After I go running or biking, I feel like I can loosen my grip on the conflict a little bit. There’s plenty of research showing how much these activities help, and it’s also something you can just feel. After I exercise, I know I’m less likely to personalize criticism—or catastrophize about what might come next.

Of course, sanity also requires boundaries. There need to be lines that don’t get crossed, places that exist outside the conflict zone. Ideally, craft those boundaries together, in total transparency, with all the various factions involved, and then defend them—firmly and dispassionately.

It is very hard to think under stress. Humans aren’t designed to do it, so we shouldn’t expect to.

Instead, train for conflict in advance. Develop muscle memory you can use when you need it, without having to think. Friedman recommends finding a peer you trust (say, a fellow superintendent) and meeting weekly to actually role play hard conversations. Awkward, I know. But it’s worth it.

Ask the other person to play the role of your biggest critic, and you play you. Then (and this is important) switch roles. Having done this in trainings with Friedman and other mediators, I can say I always resist role playing at first—and I’m always glad I did it afterward. Usually, I come away with some insight into my so-called adversary—just by “playing” them in a five-minute conversation. (Which is why the CIA uses role-play games to train its agents. It sounds squishy but it works.) Understanding is key to good conflict, and it can be easier to achieve outside the zone of conflict.

After our conversation, John went back to work, getting schools reopened on time for fall. Two weeks into the school year, things are going well, so far. He and the union leader have had a couple of good meetings, including a real-life, in-person lunch, like old times.

“I think both of us recognize that we could have a more fruitful relationship than we have now,” he said. They aren’t there yet, but he’s allowing himself to hope—for now.

This piece was adapted from an episode of the Slate podcast How To!, which brings a listener with a real-life problem together with an expert who can help. Listen to the full episode here.