Workplace anger often gets a bad rap. It conjures up images of hotheaded bosses who intimidate their employees, or creative types with big egos who can’t stand being critiqued. From multiple news outlets, we witness disgruntled coworkers “going postal” and resorting to violence after becoming enraged at something or somebody. Or perhaps we think of the everyday hassles that stir up resentment at work, from coworkers not meeting our expectations to passive-aggressive emails. 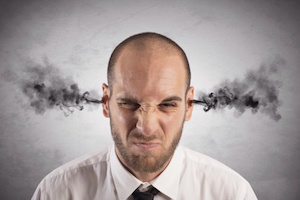 But not all anger is created equal. Some types of anger—particularly “moral anger,” a concept we delineate in a recent paper published in the Journal of Organizational Behavior—may be crucial to the health of our institutions.

Moral anger is triggered not because of something done (or not done) to us, but because of wrongdoings and ethical violations perpetrated against others. We get angry witnessing unfair or degrading acts against a colleague, biased and insensitive management practices, or even seriously flawed company policies and harmful products. Moral anger is an intense emotional state stemming from the violation of a recognizable moral standard that impacts others more than oneself. Importantly, it also prompts us to act to improve the situation, even in the face of significant personal risk.

When the term “moral” is applied to anger, it necessarily implies positive intentions: We seek to uphold moral standards, ensure fair treatment, or protect those who are vulnerable. As such, moral anger differs from other forms of anger in three major ways:

1. Universal standards are violated. Moral anger is triggered by the violation of universal standards of justice, ethics, or human dignity, rather than individualized, idiosyncratic preferences, values, or ideology. For example, in contrast to getting angry about a perceived personal insult by a coworker or boss, moral anger is more likely to emerge when an employee witnesses a coworker unfairly accused or punished when he was not responsible. Worse still would be a situation of managers bullying or intimidating their employee, demonstrating blatant abuse of their position of power. Universal standards are core to the moral fabric of society; society in general and healthy individuals in particular tend to be equally outraged at their violation.

2. We feel concern for others. Moral anger reflects an altruistic orientation, where one’s focus is on the needs and rights of others, more than our own. Rather than be upset because of our personal disadvantage or inconvenience, our angst stems from desiring to help others, especially those who are particularly vulnerable. I may be upset because you yelled at me, but getting angry—although justified—benefits primarily my own ego and pride. Becoming angry while witnessing another’s berating, however, would more likely demonstrate moral anger. Selfishness or self-centeredness is antithetical to moral anger.

3. We take corrective action. Moral anger prompts us to do something to help improve the situation. While we recognize that anger is an emotion, not an action. If anger doesn’t prompt some action meant to correct the situation, then it lacks the “moral” moniker. Feeling indignant about someone’s mistreatment but doing nothing to help, because “it’s none of my business” or “someone else can/should/will handle this situation,” is not moral anger. To refer back to the previous examples, to qualify as moral anger, the colleague witnessing the unfair reprimand must also support or defend the embattled coworker. Only then can we speak of the corrective power of moral anger.

Whistleblowing often involves moral anger—for example, in the celebrated case portrayed in the 1999 film The Insider. In 1996, Jeff Wigand (then Vice President of Research and Development at Brown and Williamson Tobacco and responsible for developing reduced-harm cigarettes) blew the whistle that his company intentionally increased the amount of nicotine in their cigarettes, thereby enhancing their addictive nature. After initially voicing his objections inside the company, he reported being harassed and receiving anonymous death threats.

In a 1996 interview with Mike Wallace of 60 Minutes, Wigand stated that he “got angry” about the company’s decision to abandon the safer cigarette and ultimately found the courage to speak up. However, his whistleblowing brought significant danger to him and his family at the same time that it exposed unethical practices by U.S. tobacco companies. In the end, Wigand’s actions potentially benefitted millions of people, who would have been exposed to this especially harmful but legal product.

Perhaps more mundane and less dramatic—although no less valuable—are personal experiences when our own anger prompts us to speak up on behalf of colleagues experiencing injustice, intimidation, bullying, discrimination, cruelty, or disrespect. Moral anger is a type of “energy” we can use to overcome what for many of us is an inclination to stay silent or uninvolved in conflict. As political philosopher Edmund Burke reminds us, “The only thing necessary for the triumph of evil is for good men (or women) to do nothing.”

The benefits of encouraging employees to speak up when they witness threatening behaviors, unfair accusations, or coercive tactics are plentiful. Minimally, challenging these moral violations in the workplace exposes the acts and perpetrators. Allowing space for the expression of moral anger at work can promote environments of support, compassion, courage, integrity, and fairness. Managers who allow or even encourage employees to express moral anger can learn not only what is happening but also—and perhaps more importantly—what needs to change in their realms of influence. Displays of anger at work signal something is wrong that needs management’s immediate attention and careful response.

Are we saying we want more angry workplaces? Yes and no. Self-serving expressions of anger should always be kept to a minimum. However, if we witness something that is so wrong that it makes us angry, say something…do something. Organizations and their individual members benefit when morally-wrong behaviors are addressed and eliminated.

Are you potentially sticking your neck out by expressing moral anger? Yes. Is the risk worth taking, given the chance to benefit someone else? Yes! Moral anger shows we care about others, not just ourselves. At the same time, it can help correct many of the woes we experience at work and in society. As one of us argues in a new essay, a world without anger would be a world without “critical corrections,” and that’s a world we don’t want to live in—no matter how peaceful and harmonious it appears.