Directing attention toward where it needs to go is a primal task of leadership. Talent here lies in the ability to shift attention to the right place at the right time, sensing trends, emerging realities, and opportunities. 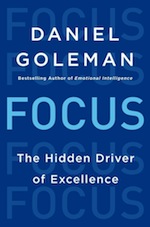 This essay is adapted from Daniel Goleman's new book Focus: The Hidden Driver of Excellence.

A leader’s field of attention—that is, the particular issues and goals she focuses on—guides the attention of those who follow her, whether or not the leader explicitly articulates it. People make their choices about where to focus based on their perception of what matters to leaders.

This ripple effect gives leaders an extra load of responsibility: They are guiding not just their own attention but, to a large extent, everyone else’s. When we say a leader has “focus” we typically are referring to one-pointedness on business results, or on a particular strategy.

But is such single-pointedness enough? What about the rest of the repertoire of attention? Leaders need strengths in three areas of focus: self (inner), people (other), and system (outer) awareness. Inner focus attunes us to our emotions and intuitions, guiding values and better decisions. Other focus smoothes our connections to the people in our lives. And outer focus lets us navigate the larger world.

But the challenge goes beyond that. The key is finding balance, and knowing when to use the right kind of focus at the right time. Combining data on attention with that on emotional intelligence and performance, this triple focus emerges as a hidden driver of excellence.

Blinded by the prize

To see where single-point focus can go wrong, take this example: The partner at a huge law firm drove her team crazy. She micromanaged, constantly second-guessing them, rewriting reports that didn’t meet her standards even though they were perfectly fine. She could always find something to criticize but nothing to praise. Her steadfast focus on the negative demoralized her team—a star member quit and others were looking to move laterally in the firm.

Those who, like that too-critical lawyer, have this high-achieving, single-focused style are called “pacesetters,” meaning they like to lead by example, setting a fast pace they assume others will imitate. Pacesetters tend to rely on a “command and coerce” leadership strategy where they simply give orders and expect obedience.

Leaders who display just the pacesetting or command style—or both—but not any others create a toxic climate, one that dispirits those they lead. Such leaders may get short-term results through personal heroics, like going out and getting a deal themselves, but do so at the expense of building their organizations.

“Leadership Run Amok” was Harvard Business Review’s title for an article about the dark side of pacesetting, written by Scott Spreier and his colleagues at Hay Group. “They’re so focused on the prize,” Spreier told me, “they’re blinded to their impact on the people around them in the room.”

Spreier’s article offered up that hard-driving law partner as a prime example of pacesetting at its worst. Such leaders don’t listen, let alone make decisions by consensus. They don’t spend time getting to know the people they work with day in and out but relate to them in their one-dimensional roles. They don’t help people develop new strengths or refine their abilities but simply dismiss their need to learn as a failing. They come off as arrogant and impatient.

And they are spreading. One tracking study finds that the number of people in organizations of all kinds who are overachievers has been climbing steadily among those in leadership positions since the 1990s. That was a period when economic growth created an atmosphere where raise-the-bar-at-any-cost heroics were lionized. The downsides of this style—for example, lapses in ethics, cutting corners, and running roughshod over people—were too often winked at.

Then came a series of flameouts and burst bubbles, from the collapse of Enron and the dot-com debacle on. This more sober business reality put a spotlight on the underside of pacesetters’ single-minded focus on fiscal results at the expense of other leadership basics. During the financial crisis of 2008 and onward, “many companies promoted strong, top-down leaders, who are good for handling emergencies,” Georg Vielmetter, a consultant in Berlin, told me. “But it changes the heart of the organization. Two years later those same leaders have created a climate where trust and loyalty evaporate.”

The failure here is not in reaching the goal, but in connecting with people. The just-get-it-done mode runs roughshod over human concerns.

Every organization needs people with a keen focus on goals that matter, the talent to continually learn how to do even better, and the ability to tune out distractions. Innovation, productivity, and growth depend on such high-performers.

But only to a point. Ambitious revenue targets or growth goals are not the only gauge of an organization’s health—and if they are achieved at a cost to other basics, the long-term downsides, like losing star employees, can outweigh short-term successes as those costs lead to later failures.

When we’re fixated on a goal, whatever is relevant to that point of focus gets priority. Focus is not just selecting the right thing but also saying no to the wrong ones; focus goes too far when it says no to the right things, too. Single-pointed fixation on a goal morphs into overachievement when the category of “distractions” expands to include other people’s valid concerns, their smart ideas, and their crucial information. Not to mention their morale, loyalty, and motivation.

“Two years ago, I got some sobering performance feedback,” confides the CEO of a global office real estate firm. “I was great on business expertise, but lacking when it came to inspirational leadership and empathy. I had thought I was fine, so at first I denied it. Then I reflected and realized I often was empathetic but shut down the moment people were not doing their job well. I get very cool, even mean. … I realized my biggest fear is of failure. That’s what’s driving me. So when someone on my team disappoints me, that fear kicks in.”

When fear hijacks him that CEO falls back on pacesetting. “If you don’t have self-awareness when you get hooked by the drive to achieve a goal,” says Scott Spreier, who coaches senior leaders, “that’s when you lose empathy and go on autopilot.”

The antidote: realizing the need to listen, motivate, influence, cooperate—an interpersonal skill set that pacesetting leaders are typically not familiar with using.

“At their worst, pacesetters lack empathy,” George Kohlrieser, a leadership maven at IMD, a Swiss business school, told me. Kohlrieser teaches leaders from around the world to become “secure base” leaders, whose emotionally supportive and empathic style encourages the people they lead to work at their best.

How to develop a triple focus

What stops leaders from growing beyond pacesetting?

One hurdle is the implicit attitude at work that professionalism demands we ignore our emotions. Some trace this emotional blind spot to the “Protestant” work ethic, embedded in the norms of workplaces in the West, which sees work as a moral obligation that demands suppressing attention to our relationships and what we feel. In this all-too-common view, paying attention to these human dimensions undermines business effectiveness.

But organizational research over the last decades provides ample evidence that this is a misguided assumption, and that the most adept team members or leaders use a wide aperture to gather the emotional information they need to deal well with their teammates’ or employee’s emotional needs. 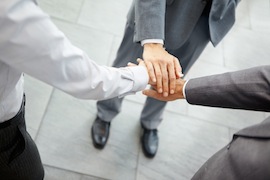 When Accenture interviewed 100 CEOs about the skills they needed to run a company successfully, a set of 14 abilities emerged, from thinking globally and creating an inspiring shared vision, to embracing change and tech savvy. No one person could have them all. But there is one “meta” ability that emerges from research on leadership: self-awareness. Chief executives need self-awareness to assess their own strengths and weaknesses, and so surround themselves with a team of people whose strengths in those core abilities complement their own. This means inner focus.

Companies also need leaders who have an other-focus—who understand the motivations of their employees and want to help other people be successful, too. For instance, they realize that if someone lacks a given strength today, they can work to develop it. Such leaders take the time to mentor and advise. In practical terms this means:

These leadership styles, used in tandem or as appropriate to the moment, widen a leader’s focus to draw on inner, other, and outer inputs. That maximal bandwidth, and the wider understanding and flexibility of response it affords, can pay dividends.

Research by the McClelland Center shows that more adept leaders draw on these as appropriate. The wider a leader’s repertoire of styles, the more energized the organization’s climate and the better the results.

Of course that doesn’t mean that leaders can ignore other concerns, like market trends or innovation, to meet changing demands. But the same attention skills that can help manage one’s own emotions and work relationships can help leaders stay more flexible and allow for better outer focus.

For example, two of the main mental ruts that threaten the ability to focus well on systems and trends are unquestioned assumptions and overly relied on rules-of-thumb. These need to be tested and refined time and again against changing realities. One way to do that is by practicing what Harvard psychologist Ellen Langer calls “environmental mindfulness”: constant questioning and listening; inquiry, probing, and reflecting—gathering insights and perspectives from other people. This active engagement leads to smarter questions, better learning, and a more sensitive early warning radar to coming changes.

Another antidote is expanding your circle of connection beyond your comfort zone and inoculating against in-group isolation by building an ample circle of no-BS confidants who keep you honest. A smart diversification goes beyond gender and ethnic group balance to include a wide range of ages, clients, or customers, and any others who might offer a fresh perspective.

Leadership builds on the basic mechanics of our mental life. Self-awareness, which fosters self-management, and empathy, the basis for skill in relationship, are fundamentals of emotional intelligence. Beyond these, systems science takes us to wider bands of focus as we regard the world around us, tuning to the complex systems that define and constrain our world. All that can be boiled down to inner, other, and outer focus.

For leaders to get results they need all three kinds of focus. A leader tuned out of his internal world will be rudderless; one blind to the world of others will be clueless; those indifferent to the larger systems within which they operate will be blindsided.

And it’s not just leaders who benefit from a balance in this triple focus. All of us live in daunting environments, rife with tensions and competing goals and lures of modern life. Each of the three varieties of attention can help us find balance where we can be both happy and productive.