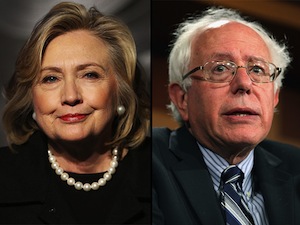 Many people think so. As linguist Deborah Tannen argued in a recent Washington Post op-ed, our definitions of a “good leader” and a “good woman” can sometimes come into conflict: “While the qualities expected of a good leader (be forceful, confident, and, at times, angry) are similar to those we expect of a good man, they are the opposite of what we expect of a good woman (be gentle, self-deprecating, and emotional, but not angry).”

Corporations and government agencies already go to great lengths to try to purge their hiring process of unconscious bias, because they want to make sure they’re simply getting the best person for the job, regardless of his or her gender. Does it make sense to aim for the same goal in the presidential election?

After all, the race is just another hiring process, albeit an immensely complicated and expensive one with 319 million stakeholders in the USA alone. As the American people interview candidates for the job of president, how can they make sure gender bias doesn’t get in the way of hiring the right one?

The first step, suggests the research, is to be conscious of our biases—biases that aren’t always as clear-cut as the ones Tannen describes. The next is to block kneejerk bias before it interferes with decision making.

Many surveys and laboratory experiments support the notion that we’ve entered a confusing time for women in power.

In 2008, a Pew Research Center survey found 69 percent of respondents felt men and women make equally good leaders. By 2015, that number had increased to 75 percent. But this straightforward improvement conceals some interesting nuances.

For one thing, the Pew surveys show that both women and men overwhelmingly think women are better at many skills and traits prized in leaders, especially honesty. So why aren’t more women in leadership? In part, claim many female respondents, because women are held to higher standards—or simply different standards. Recent studies reveal just how complex our expectations have become.

For example, one 2014 study in the British Journal of Social Psychology found that “assertive” female leaders are just as likable and influential as assertive men—but that female leaders who appear tentative or self-deprecating about their roles are less effective than their assertive counterparts. The same wasn’t true for men. In fact, men who are less imposing are sometimes seen as more effective.

The bad news is that tentative women might face more discrimination—a finding backed up by other studies. But it gets worse: According to UC Berkeley business professor Laura Kray, other studies show that female managers consistently underrate their own performance, when compared to how their own supervisors rate them. This low self-appraisal may help explain why there are relatively few Hillary Clintons—and why Clinton herself seems like such an outlier to some. (In contrast, men tend to overrate their own effectiveness as leaders.)

Thus women might face a new double-bind: It’s not ambition that scares people off from female leaders, as in the past, but rather less ambition and a more deferential manner. In this respect, contrary to some conventional wisdom, it might be smart of Clinton to not minimize the forceful qualities that conflict with some people’s lingering image of a “good woman.” She might face even more backlash if she were more tentative and self-effacing.

The same penalty might not apply to male politicians, who could benefit from cultivating a more laid-back persona. Certainly, Bernie Sanders has projected the image of an accidental politician, called by a movement to seek a position he doesn’t really want.

At the same time, however, leaders who strike the pose of alpha male don’t seem penalized, as we see in the case of current Republican frontrunner Donald Trump. Indeed, the Pew survey also finds that men and women alike stereotype men as being better able to grapple with national security issues, which means it might be hard to elect a woman in wartime. It also suggests that Clinton might feel pressure to be more hawkish when it comes to questions of violence and security, as we might have seen in her support for the invasion of Iraq.

Moreover, a series of four experiments published in the December issue of Journal of Personality and Social Psychology found that both women and men tend to pick tall, muscular men as leaders—a subconscious bias that doesn’t make a whole lot of sense in the 21st century.

In other words, men can potentially have it both ways, while women need to pick and choose their image carefully for fear of running afoul of such implicit biases—damned if they do, damned if they don’t.

How to block gender stereotypes in making decisions

Lori Nishiura Mackenzie of the Clayman Institute for Gender Research.

Of course, that need to be careful puts a huge burden on female candidates, one not shared by male counterparts. What about those of us who vote for them? Don’t we have a responsibility to confront our own bias—and perhaps help lift the burdens that hold women back from gaining more political power?

As Executive Director of the Clayman Institute for Gender Research at Stanford University, Lori Nishiura Mackenzie has worked with researchers to develop toolkits to help businesses “block bias” in their hiring decisions. “We know that the more we rely on ‘gut,’ the more prone we are to utilize stereotypes as a short cut in decision making,” she says.

The first step is to simply be mindful of the existence of knee-jerk bias—which in this case has involved a nationwide discussion triggered by Clinton’s candidacy. Beyond that, the Clayman toolkit suggests a series of steps that can easily be adapted by individuals who are trying to avoid bias in voting for president:

You may go through this process and still conclude that Bernie Sanders—or one of the current Republican candidates—would make a better president of the United States. One thing is for sure: We’ll never be able to choose the best candidate until we free ourselves from bias.