Five years ago, I (Dacher) received a call from Pixar writer and director Pete Docter to talk about his new film. The last time I said yes to such a request, I served as a scientific consultant for his film Inside Out. So, I was intrigued. 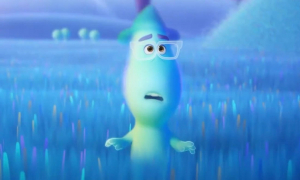 Before my visit, Pete offered a brief sketch of the film. The main character, Joe, is a middle-aged jazz pianist in a rut as a middle school band teacher in Queens. Just before his breakthrough show with a famous quartet, he falls into a manhole and dies, entering into another realm of consciousness. There he encounters “The Great Beyond”—but escapes to a pre-life realm, the “Great Before,” where he befriends a cynical “new soul” named 22. The story is about their respective quests: for 22 to find her reason for living, and for Joe to get back to life in his body for a once-in-a-lifetime gig.

Pete asked that I talk with Soul’s core creative team about the science of awe, which has preoccupied my lab at Berkeley for 15 years. Awe is the feeling we experience when encountering vast things that we don’t understand. Around the world and in culturally varying ways, studies show, we experience awe in response to others’ kindness and courage, nature, music, religious or spiritual practice, the visual and dramatic arts, and epiphany. We sense awe in our bodies in the chills, tears, and the chest-warming sense of being part of something larger than our egos. It leads us to share, collaborate, and wonder. In experiences of awe, people often speak as if they have found their soul.

Later, I met my coauthor, Michael Frederickson, a development artist on Soul. After working on Inside Out—which personified five major emotions as characters—Michael had been giving a talk around Pixar entitled “The Sixth Emotion.” That emotion is awe, which was not a character in Inside Out. Michael’s talk considered the role of spectacle in growth and narrative, and visual strategies for creating awe-inspiring moments in film. On Soul, Michael and a team of other artists engaged in artistic experiments to translate the science of awe to the visuals that hopefully inspire it in Soul’s audience.

Thanks in part to Michael’s work, we can see this dynamic experience in an early scene in Soul. As Joe improvises during an audition for his breakthrough gig, the jazz club dissolves into a wash of rippling curtains of color distorted by the piano’s bass notes. Joe floats in space. Time seems to expand. Studies find that after watching awe-inspiring nature videos or recalling an experience of the emotion, our sense of time and space shift, and senses, like color and sound, often blend.

Upon returning from this solo, Joe sits silently at his piano. Next to him, the bass player’s eyes are wide and mouth agape, a universal expression of awe. The music reveals something of Joe’s soul—and the rest of the band can feel it, too. Awe has merged their individual experiences into a shared recognition of the sublime Joe finds in music.

We often feel awe in response to mental states that depart from those that make up our waking life: in dreams, premonitions, epiphanies, mystical encounters, meditation, visions in many indigenous traditions, or those brought on by psychedelics, the focus of new science. This often-ineffable space of experience is explored in Soul after Joe falls into the manhole.

When we first encounter Joe in this new realm as a soul approaching the “Great Beyond,” he is comically small on screen. In empirical studies from different cultures, people’s selves do seem to shrink (or vanish) when feeling awe—when taking in vast views, for example, or standing surrounded by large trees, or when moved by a stranger’s courage.

This vanishing of the self has been located in the brain in studies from Japan and the US: Awe deactivates the default mode network, regions of your cortex that represent the world from an egocentric point of view. This dissolution of the ego is portrayed in Joe’s escape from “the Great Beyond.”

To visualize such self-transformation, Pixar’s designers started with playful tests, like scribbling “lost souls” in virtual reality. Or imagining geometric forms in different numbers of dimensions. Or turning spaces inside out. The end result is that as Joe plummets through space, the outline of his self alternates between thin line and split spectrums of color. Joe’s soul fills the screen or appears infinitesimal. It ricochets at the speed of light through diaphanous liquids and two- and three-dimensional vibrating lines. The Pixar team hoped using new techniques to render a sequence unlike the usual visuals found in their films would awaken a sense of awe in audiences.

When Joe lands in the “Great Before,” he’s surrounded by hundreds of new souls. Here Pixar artists grappled with a perennial question: What might the soul look like? Every culture arrives at its own answers, studies in anthropology suggest, drawing upon ideas of the times and even the local natural environment.

For inspiration, Pixar’s artists looked to nature, long a source of metaphor about the soul, and the physics of light. In Soul, the souls are blurry. They are only separated from the environment by occasional sketch lines, and appear to be made of the same grain, line, and vaporous prismatic substance. In experiences of awe, our studies find, the boundaries between self and other do seem to dissolve. We shift from the sense that we are distinct and separate to the view that we share some primary quality with others.

Joe finally makes it back to Earth, along with 22. He sees New York through 22’s eyes, and is struck by the city’s daily wonders. Illuminated by a vivid autumn light, New York is brimming with quotidian awe. Joe and 22 find this in the soulful song of a busker in the subway, the swirl of leaves in the wind, the wisdom in the playful banter in a barbershop, and the taste of pizza. In relevant empirical science from East Asian and Western European cultures, people do report moments of everyday awe like these two to three times a week.

Joe ends up playing the gig of his lifetime. His transporting improvisations rouse the audience to a standing ovation. Joe feels strangely unfulfilled, though, still wondering what the point of his life is. He finds hints of an answer later that night at home at the piano when he puts away his musical score. We won’t spoil your experience in watching this portrayal of the sublime, but simply note how it dovetails with the new science of awe that populated our talks at Pixar.

Of course, Soul isn’t just about awe—it’s also about purpose, creativity, and connection. In important ways, the point of making and appreciating the arts, in music, painting, dance, and film, is to represent human emotion, and to allow us to experience emotions together and enjoy the insights that ensue. We were a very small part of this artistic archiving of awe, in the artistic and scientific experiments we weaved into its creation. That is why it was so very humbling, and awe-inspiring to see it for the first time. We felt the chills and tears that mark the recognition of being part of something larger than ourselves.