Emiliana Simon-Thomas is the science director of the Greater Good Science Center, where she co-teaches The Science of Happiness, a free, eight-week online course that “explores the roots of a happy, meaningful life.” She earned her Ph.D. in psychology from UC Berkeley in 2004, studying how emotional and cognitive processes interact to shape behavior and brain activity.

In the interview below, Simon-Thomas talks about how humans are a collective species that thrives on collaboration. But power and privilege, she says, can corrupt anyone — even the best, most morally guided people. The good news? There’s an antidote.

A Fiat Vox podcast episode featuring this interview with Simon-Thomas was originally published on Berkeley News in 2017. This is a new version that has been rewritten and remixed. 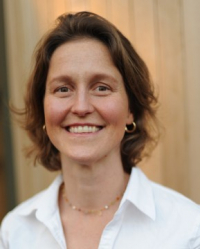 Emiliana Simon-Thomas: I started out as a neuroscientist, and I was very interested in the relationship between emotions and what we call higher cognition. There’s this kind of common cultural notion that emotions get in the way of reason and logic, and that they lead us astray. That’s really Plato’s claim: Emotions are the enemy of reason.

And I felt like that ethos was a disservice to emotions as an important part of the human experience. It was not doing us any good to try to stifle our emotions, to try to suppress them, chronically, in the interest of being smart or logical.

Anne Brice: Now, as the science director of the Greater Good Science Center at Berkeley, her work focuses on the science that connects health and happiness to social affiliation, caregiving, and collaborative relationships. Humans are a super-collective species, she says. That’s how we succeed.

EST: I mean, if you think about ants, we’re more like ants than we are like cats or mountain lions, who really have a more solitary, competitive existence. We succeed through our cooperative endeavors. We live in really rich, dynamic, complex communities. We only survive our early life through a deep and profound kind of vulnerability-and-caretaking relationship. We don’t come out ready to go.

Giving of your own resources, your own reserves, is tied to activation of pleasure circuits in the brain. Reward circuits are always talked about in the context of cocaine addiction or, you know, accumulation of pleasure in material possessions when, in fact, they aren’t unique to those self-interested opportunities. They’re just as wired to experiences that come with being generous and supporting others.

AB: There was a 2012 study by psychologists at the University of British Columbia, says Simon-Thomas, where researchers gave toddlers under the age of two treats, like goldfish crackers. An experimenter had a puppet and befriended the toddlers. Then, the toddlers were asked to give the puppet one of their goldfish crackers. The experimenters also gave them a treat to share with the puppet.

EST: The experimenters are videotaping the kids and looking at their smiles, and the most robust smiles happen when they actually take a goldfish out of their own cup and share it. So, again, there’s something fundamental early about how rewarding it is for us to foster an affiliative connection with someone else through generosity.

AB: So, we depend on our instinct to cooperate and share with each other for survival. What happens when someone is highly privileged or suddenly gains more power in society somehow?

EST: Social hierarchy is really an interesting moderator of our empathic, nurturing, compassionate tendencies. In terms of power, in terms of status, there’s definitely a tendency, when people who are privileged, their fate doesn’t rely on the actions of other people as much as it does when people are reliant on others because they don’t have all of their needs met, or they can’t control every aspect of their access to resources.

If you’re interacting with other people in dynamics where you’re asking for help, or you’re borrowing stuff or you’re lending stuff, you just have a different outlook than if you really don’t ever have to seek any assistance from anyone else. That’s one argument about where this kind of decrement in prosociality originates—in people who are in positions of high power.

AB: But, she says, there’s another theory—that everyone, even the highly privileged, prefer fairness and justice. And they have to figure out how to explain or justify their higher social status.

EST: It’s not intrinsically fair for certain people to have the lion’s share of resources and for other people, who also work very hard, to have very little access and few resources. Even people in positions of privilege have that basic impulse to prefer justice and fairness.

And so, faced in that position, I’m the one who has everything. I’ve got it all. Well, that doesn’t feel right. That’s not fair. There’s a tendency to kind of re-explain the justification for my privilege: “I’ve worked harder than other people. I deserve what I have. And it’s because of something about who I am that is unique compared to other people who don’t have anything.” That explanation, that narrative, is a form of distancing: “The other is so different from me that I don’t really have to empathize with them or concern myself with anything about their welfare or well-being.”

Even the best, most morally guided, virtuous humans are vulnerable to these sorts of forces when they find themselves in those positions of power. And I was going to say, the Berkeley Social Interaction Laboratory study that Dacher Keltner ran—it was basically a Monopoly game. And they set it up so one person just had a lot more money and property than the other person. Then afterward, they put a plate of cookies on the table and there was an odd number and just, invariably, the person with the power in the game ate the odd cookie.

Not only did they eat it, but they got crumbs and they were chewing with their mouths open. Not only were they willing to cheat, they were willing to defy cultural norms of politeness. And these were people like you and I. Put in that position, that is the impulse—to explain away the inequality and suddenly not concern yourself with the other because you don’t think you’re ever going to need them.

It’s really interesting, and there’s definitely ample evidence that inequality is something that poses a substantial problem to well-being among societies and nations. Nations where inequality is really high tend to perform worse on wide surveys of other metrics of well-being: health care, education, infant mortality. All those things get a little bit worse when a nation or society is set up in a way where there are huge chasms between the haves and the have-nots.

AB: But, she says, there are ways for people who have more privilege to fight the tendency to distance themselves from other people with less power in society.

EST: Power corrupts—if you’re corruptible, right? But if you’re aware that, “If I get this power, I am corruptible, and what can I do to manifest an antidote to that tendency?” I think to the extent that they can maintain their sense of common humanity, that’s really, really important. If they can resist the temptation to think of themselves in an exceptionalist manner and instead really focus on the ways that other people’s efforts and actions and presence are essential to the privilege that they’ve got: “I would not be the person I am without all of these other people who I work with who are making it possible.”

So, a lot of times, gratitude can be a really powerful exercise—a very kind of deliberate, conscientious kind of gratitude toward people, where you acknowledge what they did, you explain why it helped you, and acknowledge the effort that they put into it.

And again, that kind of regular, routine exercise can just maintain that awareness that you’re not exceptional because of some special thing about you, and you’re not privileged to have more access to dignity or respect because of that. Dignity and respect are everyone’s entitlement and to not fall prey to the risks of power. Remembering that is important.