Candidates in last week’s Republican debate didn’t mention economic inequality as an important national concern. But Democratic primary candidate Bernie Sanders has put the issue at the center of his campaign. 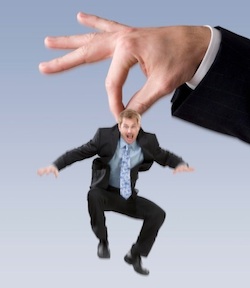 “In the United States of America today, there is massive injustice in terms of income and wealth inequality,” Sanders told a crowd last week at the conservative Liberty University.

Lopsided incomes, he argued, make the wealthy minority more powerful than the majority, which leads to exploitation. Is he right? Or are Republicans right to try to make inequality invisible? What is the impact of income inequality on our a society? A new study published in Nature suggests some provocative answers.

Researchers at Yale University carried out a series of experiments in which participants from around the world were randomly grouped into online networks to play a cooperative economics game. The participants were given an “income” then offered a choice to cooperate by giving up part of their wealth so that everyone else’s fortunes would go up, or to “defect” and pay nothing, while still reaping the rewards of others’ generosity. Afterwards, they learned how other group members behaved and could choose to maintain or cut ties with fellow players.

But there was a twist: Within this set up, the researchers manipulated initial income to create conditions of no, little, or a lot of wealth inequality within a group. Also, in some groups participants knew about relative wealth levels, while in others relative wealth was invisible.

The researchers then followed what happened in the game as people went through several rounds. Their analyses showed that, when initial wealth inequality was visible to all, cooperation among participants went down, social ties were fewer, and inequality went up over the course of the game. But, if relative wealth was invisible, inequality didn’t have this same effect.

“The surprising thing for us was that inequality was not a corrosive force, but visibility was a very corrosive force and much more important, ” says Nicholas Christakis, a sociologist known for his research on social networks and one of the authors of the study.

Upon further analysis, Christakis and colleagues found that the negative effect of visibility was driven specifically by lower cooperation rates from wealthy participants, who chose not to cooperate with poorer participants. Conversely, when relative wealth wasn’t visible, richer participants were more likely to cooperate, helping to equalize wealth and maintain social connections.

“When you have visible inequality, you get an exploitation scenario, where the rich take advantage of the poor,” says Christakis. “Inequality itself doesn’t have much of an impact, but visibility of inequality erodes cooperation, wealth accumulation, and friendliness.”

He suggests that conspicuous wealth may be problematic because of psychological processes related to social comparisons and competitiveness. Though these variables were not assessed in the present study, they have been shown to influence economic behavior in other studies, and Christakis has seen this effect in his own students at Yale. He points to a survey he conducts every year where he asks students what world they’d rather live in: one in which they earn $35,000 while everyone else earns $30,000, or one in which they earn $50,000 while everyone else earns $60,000. Invariably, the vast majority of his students pick scenario one, indicating that relative wealth is more important to them than absolute wealth.

Of course, even if visibility of wealth inequality is more problematic than inequality itself, it’s pretty tough to imagine a world where one could be separated out from the other. Christakis notes that most rich people—at least in the United States—want to flaunt their wealth, and our society has a voyeuristic appetite for following the fortunes of others.

“We have drones that fly over Oprah’s mansion; we have The Lives of the Rich and Famous [the TV program], and social media, and so people are aware of the inequality,” says Christakis.

Still, he and his colleagues have some ideas of how their research might be applied to social policy and have a positive impact. He suggests that school uniforms might be a good idea, because they may reduce affluent student awareness of their own relative wealth and create more cooperative groups with stronger social ties.

He also suggests that perhaps large pay disparities should be kept secret within a corporation; otherwise, inequality may be corrosive to cooperation and result in less overall productivity. (Of course, this last suggestion could be extremely problematic: Concealing the truth can solve one problem but may create others, such as anger if the discrepancies are revealed.)

Christakis sees potential political ramifications for this work, too, though he claims the research provides bad news for both conservatives and liberals. While the study did not necessarily support the idea of eliminating income inequality itself—something he notes might be “disappointing to the left”—it does help show that policies aimed at redistributing wealth don’t affect the economy in any negative way either, as some on the right might argue.

“Our results show that if you have policies that redistribute wealth and convert an unequal society to an equal society, they both have about the same economic growth. That doesn’t make the right happy,” says Christakis.

Nor will conservatives like the fact that visible inequality causes exploitation of the poor, he says. According to Christakis, it’s only when you have visible equality (or invisible inequality) that you create a fairness scenario where everyone works together cooperatively. This suggests that there may be compelling reasons to redistribute wealth, anyway. Or, at least if we choose to redistribute wealth for other reasons—let’s say to promote better health outcomes, he suggests—no harm will be done to the economy.

Of course, this is only one study, and it would be unwise to make policy recommendations based on his results alone, says Christakis.

Yet, experiments like this give us all more insight into what factors influence human economic behavior. If we know that social comparison is important and that wealth inequality is particularly problematic when it’s visible—things we might miss if we only looked at observational data on economic behavior—then we can figure out how to get to a better, fairer economic system, and increase cooperation and social ties in the process.

“These experiments may be very abstract and artificial. But on the other hand, you can be quite confident about the causes you’re pointing to,” says Christakis. “That’s why they are so valuable.”