A new study suggests this rising income inequality in the United States doesn’t just affect Americans’ pocketbooks; it affects their happiness. Over the past four decades, according to the study, the American people have been the least happy in years when there was the widest gap between rich and poor. 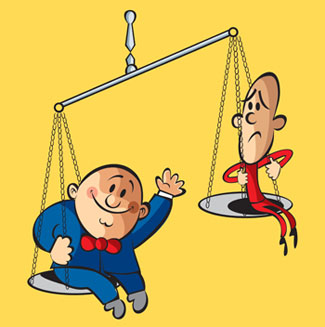 In the study, which will be published in an upcoming issue of Psychological Science, researchers examined 50,000 responses to the General Social Survey, which has tracked well-being in the United States since 1972. The researchers, led by Shigehiro Oishi of the University of Virginia, zeroed in on Americans’ levels of happiness between 1972 and 2008, along with their perceptions of how fair and trustworthy other people are. Oishi and his colleagues compared these responses both with participants’ reported household income over those years and with a U.S. Census measure of income inequality.

Consistent with previous studies, the results show that the American population as a whole is less happy in times of greater income inequality. However, this wasn’t true across all income brackets: Only low-income participants—people whose income placed them in the bottom 40 percent of the entire U.S. population—reported reduced happiness in times of greater inequality. For other Americans, inequality was not reliably linked to greater happiness or unhappiness.

But what sets this study apart from previous research is that the observed link between unhappiness and income inequality was traced to psychological factors, not simply economic ones. People weren’t unhappy just because their income was lower. Instead, the authors’ analysis revealed that greater inequality was linked to reductions in trust and perceived fairness—and it was drops in those attitudes that made people feel less happy.

This finding echoes other research linking fairness and trust to happiness.

In the study, Oishi and his colleagues argue that their results may explain why economic growth has not been accompanied by increases in happiness in the United States, unlike in other developed nations. The problem, they suggest, is that gains in national wealth in the U.S. haven’t been distributed equally, and this inequality has caused Americans’ happiness to suffer.

Still, the authors acknowledge that the changes in happiness they observed could be due to factors other than declines in trust and perceived fairness, such as satisfaction with one’s job or neighborhood, for which they didn’t account. They say more research is needed to flesh out the link between inequality and happiness.

For now, they write, this much is clear: “Americans are happier when national wealth is distributed more evenly than when it is distributed unevenly.

“If the ultimate goal of society is to make its citizens happy,” they add, “then it is desirable to consider policies that produce more income equality, fairness, and general trust.”

Someone should show this article to Tom Nagel and
Derek Bok, both of whom believe “greater economic
equality of a society is not correlated with higher
average happiness” (see Nagel’s review of Bok’s book
The Politics of Happiness: What Governments Can
Learn from the New Research on Well-Being
http://www.nybooks.com/articles/archives/2010/de
c/23/who-happy-and-when/). Did I not point this out
already? (see
http://www.counterpunch.org/piety01242011.html )

If this study is correct, then get ready for even more unhappiness. The trends in income (and wealth) inequality have been very clear since around 1980 as the country has embarked on an extended experiment with trickle-down economics.

The top 1% of society now receives roughly 24% of national income - more than the bottom 50% of society. That is a staggering statistic. Unfortunately, the top 1% has used its wealth to gain control of all branches of government and the media, entrenching this inequality across our polity and economy.

Anyone who dares to question this situation is accused of engaging in class warfare and derided as un-American, a socialist, etc. The reality is that class war has been waged in this country for decades, and the people at the bottom - and, increasingly, in the middle - are losing.

The six-million dollar question is just how unhappy Americans can become without exploding in social and political upheaval.

As far as the difference in Income is concerned, if a CEO is paid as much income as a janitor, why would he bother to work?
The high salary is for a reason, which is ultimately what matters as a person works depending on his education, eligibility & experience. The more educated & experienced a person is, the more can he earn in the most right sense.

If you’d pay a guy with an M.S. degree the same salary as a High School dropout, the world would be a far shittier place. That is where taxes come in.

@Demotivators: You know what a “straw man”
argument is–I hope. Who said everyone should be
paid exactly the same amount independently of
what they do or how good they are at it? There may
be people who believe that, but I’ve never actually
heard anyone make such an argument. The
argument I, and lots of other intelligent, reflective
and ethical people, have been advancing is that
there should be a more equitable distribution of
wealth in the U.S., not that everyone should have
exactly the same amount of money. Lots of
countries (e.g., Denmark, Sweden, Norway) have
less polarization of wealth than we do in the U.S.
and not only are their economies are actually doing
better than ours, but recent research shows people
in those countries are happier than people in the
U.S. You may be motivated by nothing but money,
but if so you are, fortunately, the exception among
human beings rather than the rule.

The USA is in danger of becoming a nation of extremes; a super rich class that lives in gated communities protected by private security and a proletariat barely existing on McJobs in decaying urban areas. Yet Americans are being deceived into believing that higher taxes are a bad idea. Give a rich person a tax break, they pocket it and add to their wealth. Give a poor person more money, they SPEND it and get the economy moving. Look at the countries with the highest standards of living and highest rating by the United Nations, in terms of human development. All of them have much higher taxes than the USA and much greater income equality. Wake up America! Low taxes do not = prosperity and fairness to all! Celulitis

This is not surprising at all. great study but sad results…

thanx for providing the study in pdf format ..

The bran-new Metro interface have been brought in to Windows 8, this interface have the following advantages such as the convenience to users to run touch operations, live View of useful information and applicability for mouse and keyboard operation

I Can’t open the study in PDF with Adobe Acrobat, got any other possibilities to make it accesible to me? Thanks!

It’s a shame about the spam that seems to be creeping onto this site, but it’s nice to see that several other readers understand exactly what is happening in America and how we are being deceived by the corporate oligarchy.

One of the right-wing’s most pernicious myths is the idea of American exceptionalism. All the current crop of Republican presidential candidates are wrapping themselves in the flag, preying upon the citizenry’s soft-spot for appeals to patriotism. But in many key indicators of well-being, the U.S. is nowhere near number one.

Recent surveys by the IMF, the World Bank, and even the CIA rank U.S. GDP per capita around number ten. As was noted above, several of the countries that perform better in this regard are more heavily taxed, have more equitable distributions of income, and have happier citizens. But the people who are benefiting disproportionately from the status quo do not want us to know any of that.

In basic health care outcomes such as infant mortality and life expectancy, the U.S. ranks even worse (often around 23rd) yet we are routinely told by our cynical masters that we have the best health care system in the world - even when fifty million have no coverage.

Since I first posted on this thread, the American people have woken up in a way I never expected. Of course, the Occupy protesters are being demonized for their efforts. But the ferocity of the response is, in a sense, encouraging, for it signifies that we have finally found the sore spots we are not supposed to touch.

Using this module really make my layout readable and easy to be edited. This module is also easy to use because we just click and click without have to insert command or code. I recommend this module for all of my friends that have difficulties to change their layout.

In my opinion, unequality makes us happier and unhappier at the same time. Depending on what you are doing and who you are. The gap between rich and poor getting bigger and bigger, especially through globalization. But the question is, isnt it a human characteristics that we focus on status and money. Our economic systems are relying on this.
For a lot there is the problem. They dont belong to the rich or these people, who own so much. The other side there are the people who own most, have status, can decide what they buy without thinking of having to less money. But most would do the same in the same position. So it is ambivalent. It makes some happy, but more unhappy. A solution or answer in one article is in my opinion not possible!

I like the features. Colloquy is very useful, but I also think that people are exaggerating about how it should have better user experience. I don’t care much how it looks as long as it works according to my needs.

I have noticed this in several countries. In Bhutan there are rare displays of inequitable wealth outside of the monarchy and it seems to create very little of the animosity displayed in many other countries.