Yesterday afternoon, my wife and I went to see the new film Bully, which documents the lives of five chronically bullied teenagers, two of whom committed suicide.

The people around us in the theater reacted viscerally to what they were watching; there were gasps, tears, sounds of anger, and pity. As the movie ended, many in the audience seemed totally depleted. One couple went to hug each other at a corner table of the lobby. 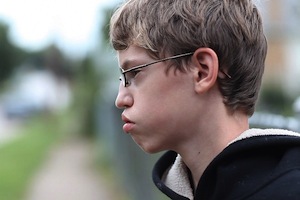 Alex is one of five central subjects in Bully. He's a sweet but brutally tormented 12 year old in Sioux City, Iowa.

I was shaken, and so was my wife. Standing outside the theater, she told me a story from the eighth grade, when she attended a highly selective school for the gifted in Sarasota, Florida—the kind of place where one imagines bullying would be rare.

But no. There was one boy she remembers in particular who was routinely bullied by his peers. One day the social studies teacher left the classroom and my wife’s classmates started teasing the boy. It started out with just words but as more and more kids participated—a majority of the class, as my wife remembers it—the bullying turned physical.

By the end, the students were throwing books at the boy, who huddled under his desk crying, his head between his knees and arms wrapped around his head. When the teacher returned, the kids instantly returned to their desks. The boy stood up, wiped the tears off his cheeks, and took his own seat.

After class was over, my wife told the teacher what had happened. The teacher’s response: “What do you want me to do about it?”

As we stood outside the theater, my wife told me that she wanted to track down the teacher and tell her to watch Bully. Then, said my wife, that teacher would finally understand what she had done when she turned a blind eye.

The power of Bully lies in the fact that it will elicit such memories in every adult who sees it—memories of being a victim, a witness, and perhaps a perpetrator. It is a very hard film to watch. The filmmakers were embedded in one school long enough to become invisible to their subjects, and as a result they were able to capture scenes of real brutality, made all the more troubling because the perpetrators are children.

For many, it will be even more troubling to witness the indifference and ineffectualness of the adults to whom the bullied kids look for protection and guidance—people like my wife’s social studies teacher.

But there are also adults whose stories will bring you to tears. I was especially moved by the parents of Kelby, a funny, brave, articulate, athletic, charming 16 year old who came out as a lesbian in the small town of Tuttle, Oklahoma. In that case, the ferocious bullying is directed against the entire family, who are shunned by the rest of the community and victimized by teachers and administrators. 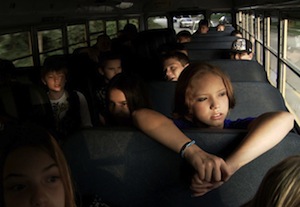 Bully reveals the school bus as the site of ferocious verbal and physical assaults.

Kelby’s parents openly admit to being just as homophobic as the rest of the town before their daughter came out. But her bravery seems to have utterly transformed the parents and turned them into heroic figures. They don’t see themselves as heroes, of course. They are, in fact, sharply self-critical. But it’s thrilling to watch them grow as people and provide unconditional, outspoken support to their beleaguered daughter.

For parents and educators, this movie is a wake-up call. For bullied kids, the movie will, I hope, be both a comfort and a call to action. It may also awaken the consciences of students who are neither victims nor bullies, but who stand by silently while their classmates are beaten down.

For me, the greatness of the film is encapsulated in one sequence. The filmmakers show home movies of one of their subjects, Alex, shortly after he was born prematurely at 26 weeks. The preemie is tiny, helpless, barely alive. Then the film cuts to Alex as a 12 year old, riding his bike through his neighborhood in Sioux City, Iowa.

In that cut, the film seems to capture an entire life, and the effect is reassuring. We know Alex started out with the deck stacked against him, and he survived. We somehow know he’ll survive the idiots who are now making his life a living hell.

I feel obligated to say that the film is not perfect. There are a lot of stories to tell, perhaps too many, and there are moments when the narrative meanders. Near the end, it slides into the tone of a public service announcement, and occasionally uses music and editing to make scenes artificially inspiring. I would have preferred that it stick to the radical subjectivity of its best moments, which go beyond advocacy filmmaking to reveal something about what it means to be human.

I was also troubled by the facelessness of the bullies—actually faceless, in at least one case when the filmmakers blur out the face of a bully whose parents likely threatened legal action for showing their child at his worst. There is a scene when an assistant principal gives two bullies an ineffectual talking-to, and the complicated looks on the boys’ faces as they are chastised enrich the film. I wish there had been more moments like that one. It would have served the movie’s purpose to humanize the bullies.

But these are quibbles. The overall effect of Bully is staggeringly powerful. It’s a movie that every parent, educator, and kid needs to see.

Bully was funded in part by the Einhorn Family Charitable Trust, which also supports the work of the Greater Good Science Center.

It does look like a good film. I worry, however, that the topic is treated with too much prescioiusness. We don’t have kids but we live close to where the Phoebe Prince incident took place. I don’t understand why those kids weren’t treated like the criminals they are.

Can you imagine in your workplace, if a coworker threw books at you? I guarantee it would not be treated as a sad drama. The assailant would be fired or perhaps arrested. Why not the same for these kids?

Now, sure maybe instead of jail time, the assailant had counselling and was allowed to return to school. But really, why put the focus on the victim? I do think Keltner made a good point when he said humans sometimes bully to keep the group in line. Maybe it would make victims feel better if they learned that we sometimes behave more like apes than humans, and being an artsy outcast will pay off after high school, but not before.

But that would entail teaching (gasp!) evolution and parents taking responsibility for their kids’ behavior. Not in America, I guess.

Your problem is the bullies are not humanized? I am still on SSI for psychosis that developed when I was 12 after 4-5 years constant bullying.  I never recovered and I am 45.  None of my classmates to date have ever apologized.  I don’t think any have any remorse. They ignore me on classmates.I imagine they are republicans who think I am scummy for not working; just as they thought I was scummy because my working class family couldn’t afford expensive shoes or acne doctors. I almost killed myself five times. I was in and out of mental hospitals constantly all throughout my twenties. I was in my 30’s before I could walk past a high school. These people ..the bullies..they ARE NOT HUMAN! Those are NOT HUMAN! How can anyone who knows what it is to be bullied even begin to humanize inhuman monsters? It can’t be done! You are asking too much of the film!!