I teach at the Millennium School, a new independent middle school located in the heart of San Francisco. Mindfulness and compassion are essential parts of our curriculum.

Yet on November 9th—the day after the presidential election—the sixth-grade classroom I walked into was anything but calm or kind. 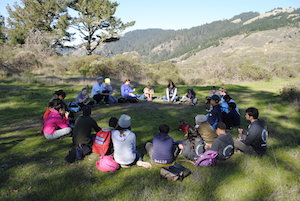 Students from the Millennium School in San Francisco

What I noticed that morning was more troubling than understandable shock, anger, or confusion. In chorus with half the nation, our students voiced sentiments that had been reverberating across the U.S. for months, albeit from different political vantage points. In their attempts to make sense of the election, I heard enmity, callousness, even what struck me as the blithe onset of not-quite-innocent hatred.   Taking this in, I felt immense sadness. The room appeared to be a splintered microcosm of the country as a whole. In progressive circles, it is common to decry the hatred, bigotry, and intolerance underlying much of Donald Trump’s rhetoric. Here was the opposite side of that same coin.

Evidently, political divisiveness fuels dehumanizing portraits of distant others regardless of ideology. At that time, it had become passingly acceptable to hope for the death of the president-elect, or to write off one’s fellow citizens as sub-human. How else would sixth graders feel comfortable expressing these sentiments in a progressive school in one of America’s most progressive cities?

Following an impulse to improvise, I Googled the electoral map and put the image up for students to see. “What do you notice here?” I asked in a near panic. “Does anyone know any Trump supporters?”

A few students said yes. Guardedly at first, they began to discuss some of the reasons people might have voted for Trump. We talked about the differences between Red and Blue states, and why the electoral map looked the way it did.

“This is an alternative to blaming and being afraid,” I said, more didactically than I might have. “You don’t have to agree with someone to try to understand them.” They knew this intuitively. It just took some work to get there.

That very afternoon over lunch, I met with my co-teacher, Stephen Lessard, to chart a new course for the students. At the Millennium School, students engage in interdisciplinary Quests that center on broad, debatable questions. Each four- to seven-week term includes two simultaneous Quests, which we distinguish as Humanities and STEM.

Up until Election Day, students in Humanities had been asking “Do Our Voices Matter?” Throughout the fall, I was consistently impressed by their ability to examine complex political questions from multiple points of view. Regular mindfulness practice clearly helped hone their academic skills.

But on that day, it was clear to us that we needed a new Quest. It centered on a simple question: “Can I Get to Empathy?”

Stephen and I began with the intention to enhance our students’ awareness of the difficulty of relating to others who are different from ourselves. What we witnessed over the next several weeks was a transformation that may yet be possible in the world beyond our classroom.

A quest toward empathy 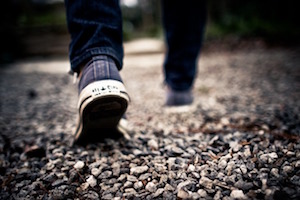 Feeling an obligation to define our terms, we asked students to first distinguish empathy from sympathy. Empathy (“feeling into”), they decided, is like putting yourself in someone else’s shoes, while sympathy (“feeling with”) means feeling bad for them. The distinction is not perfect, but the working definition allowed us to begin investigating our empathic capacities and the barriers that stand in the way.

According to the GGSC, “Emotion researchers generally define empathy as the ability to sense other people’s emotions, coupled with the ability to imagine what someone else might be thinking or feeling.”

The former, known as affective empathy, is more controversial than the latter, known as cognitive empathy. The psychologist and cognitive scientist Paul Bloom has argued recently that an excess of affective empathy can lead to what he calls “empathetic distress,” where rational deliberation and sound decision-making are impaired by too much feeling of other people’s emotions.

What this critique misses, however, are the important ways in which both kinds of empathy can be balanced to widen our perspectives of diverse others. As Arlie Hochschild writes in her new book, Strangers in Their Own Land: Anger and Mourning on the American Right, the disciplined practice of listening and feeling into others’ experience does not cede ground on moral and ethical principles. Instead, it contributes to understanding the “deep stories” at the root of all experience in our shared world, enabling deeper conversation, engagement, and, ultimately, solidarity.

The value of this approach was self-evident as Millennium sixth graders watched clips of the movie Ruby Bridges. The film tells the story of the first African-American first grader to join a white elementary school in 1960 New Orleans. As students inhabited multiple points of view within this complex social context, they saw more clearly why different characters on both sides of the integration debate felt and argued the way they did.

With a handout, we analyzed diverse characters’ feelings and motives, the obstacles they faced, and the strategies they used for overcoming them. We discussed some of the moral and political issues behind school integration in the American South—and we focused on the role of feelings apart from political context.

With the sound turned off (this was Stephen’s brilliant idea), we reviewed several key segments of the film to analyze emotions in facial expressions. Early on, Ruby’s mother looks terrified as she sees a news clip of white protestors opposing integration on television. Later, a white mother’s anger is revealed as subtly similar in its underlying fear and anguish.

Our sixth graders got it. Regardless of their beliefs or roles in the social conflict, these were all human beings. Getting to empathy allowed us to understand where each character was coming from, which lent a fuller appreciation of the complexity they were facing. This did not absolve the injustice of segregation. It clarified the deep stories underlying it.

A more profound reckoning may have come when we examined a more current political conflict. Just before the election, CNN’s Van Jones traveled to Gettsyburg, Pennsylvania, a historic site of American division, to talk to several groups of voters. The resulting conversations, uploaded as episodes 1-3 of “The Messy Truth,” offer a warning to a nation beset by bitterness, mistrust, and hostility.

“I’m worried,” Jones says as he introduces himself to a living room full of Trump supporters. “So are we,” a voice responds. This underlying symmetry points to an oft-overlooked agreement between the two sides in the so-called culture war. Yet without a willingness to listen and understand the other, there is no chance for them to hear and heal.

At first, Millennium students were reactive and judgmental as they watched Trump supporters explain themselves. Several called out at the screen to loudly voice their disagreement. As we repeated the same experiment of analyzing face work, however, the timbre of their engagement changed.

The key scene we analyzed—first with sound, then without—shows a woman break down as she relays her experience of being attacked by a close friend on social media for her political views. “It broke my heart,” she says through tears.

As we watched without volume, her pain is undeniable. This time students responded with care, compassion, and more nuanced understanding. They got to empathy by listening more deeply. Upon reflection, many saw that what stood in the way initially was their own self-righteousness.

This same approach to listening and understanding extended through our group reading of The Julian Chapter, part of R.J. Palacio’s Wonder series told from the perspective of a school bully. Students kept a running log of their feelings toward the main character as they read, then led several discussions around whether it’s possible to feel empathy for a bully.

Toward the end of the term, Stephen and I each led a loving-kindness meditation. Our hope was that students would discover the outer bounds of who they can feel compassion for.

As they focused on sending love and kindness to a difficult person in their lives, many landed on their own personal obstacles, which we encouraged them to stay with and experience fully. After this exercise, each student wrote a letter to their difficult person as an experiment in emotional bridge building. I’m not sure if anyone chose to send theirs.

The Quest’s final project was a longer essay modeled on NPR’s “This I Believe” series. Our question was, “What have you come to believe about empathy?” Students approached this in a variety of ways, and one recurrent theme was the need for kindness and respect for others who are different from ourselves.

The deep well of compassion that flows through these essays is touching. And one in particular stands out for its eloquence.

I asked Millennium student Ben Hobson if I could quote him at length, and his essay is a fitting note to end on. It leaves me wondering what might be possible if more Americans can learn to model the wisdom of this single sixth grader:

Empathy is so important. Whether it’s helping someone who’s going through a hard time, or understanding. Empathy is the most important skill you can practice. It will allow you to become happier the more you practice.

Personally, I am definitely not a Trump supporter. I believe in equal rights for black people and women, and I do not think that America should build a wall on the border of Mexico and the U.S.

It may sound weird, but I still have empathy for Trump supporters. I say this because everyone has their own opinions, and everyone’s opinions should be respected.

I think that all opinions have an equal right to be heard, whether they are Donald Trump votes, or thinking jumping off a cliff is a good idea.

Maybe, our whole idea of what is right and what is wrong is wrong.

My main idea I am trying to convey in this essay, is that empathy is quite different than agreeing with someone.

Empathy is the ability to understand and share the feelings of another being. Empathy, at its simplest, is the awareness of the feelings and emotions of other people. It is a key element of emotional intelligence, the link between self and others, because it is how we as individuals understand what others are experiencing as if we were feeling it ourselves.

Agreeing is to have the same opinion about something with someone. These are vastly different. I have empathy for Trump supporters not because I am one, but because I understand their position. This is possible…. You can have empathy for someone, without having to agree with all of their opinions.