As Harold and Annette Areno tell it, the vitality of the ecosystem of Louisiana’s Bayou d’Inde has literally disappeared before their eyes. Before industry came in, there were bull frogs and minnows, cypress and moss. As a child, Harold’s family lived off of the chickens, fish, hogs, and garden. But after decades of dumping, mercury, heavy metals, ethylene dichloride, and other toxins fill the water. It smells bad. The livestock are dead. And several people in Harold’s immediate family have died of cancers. 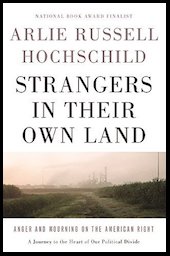 Strangers in Their Own Land: Anger and Mourning on the American Right (New Press, 2016, 288 pages)

But despite the toll they face, the Arenos stand firm in their support for politicians, including Gov. Bobby Jindal, who oppose regulating industry or enacting rules or laws to protect the environment. The question is why—and that’s what famed sociologist Arlie Russell Hochschild tries to understand in her new book, Strangers in Their Own Land: Anger and Mourning on the American Right. How can residents of such a polluted state take a dim, utterly rigid view of government regulation that aims to protect humans from corporate polluters?

Hochschild’s method is to listen, which she did over a five-year period, to pipe fitters, plant operators, telephone repairmen, building contractors, a gospel singer, and a pastor’s wife who refers to Rush Limbaugh as “my brave heart.” These are people who have struggled over decades to survive the indignities of a declining economy and environment. They are all staunch supporters of the Tea Party, a conservative political movement that arose in response to the election of Barack Obama.

She learns a great deal about how they think. But her true quest is to understand how they feel. Through hundreds of hours of conversation and thousands of pages of transcripts, she unearths what she calls “deep stories”: narrative frameworks that encompass the “hopes, fears, pride, shame, resentment, and anxiety” of the people she interviews.

What does she discover? Plenty. Scaling the empathy wall allows her to perceive an undeclared class war—but not the one liberals and progressives see, between the one percent and the 99 percent. This class war is between the middle class, the working class—and the poor. The federal government is on the wrong side of that war, providing help to the poorest while neglecting everyone else. The oil and gas industry—and business in general—offers jobs and hope, a way forward, leadership and wealth. The poor reject work and steal tax dollars, in the view of people Hochschild interviews; that makes them immoral. That’s why her subjects’ greatest scorn goes to the poor and their greatest respect goes to the people who pursue profit. People like Donald Trump.

I don’t think of myself as someone who dehumanizes people, but I found, in reading this book, that I do, by not seeing our fellow “strangers in their own land” as whole people. I found empathizing with them to be challenging, even when I pretended they were my relatives. But coming to grips with their feelings is far more interesting and gratifying than I anticipated. Strangers in Their Own Land opened up fresh space in my brain and in my heart.

Many of the themes Hochschild extracts, synthesizes, and lays plain come as no surprise. Contempt for the federal government is extreme and runs deep. “The government has gone rogue, corrupt, malicious, and ugly,” says Janice Areno, a relative of Harold and Annette. “It can’t help anybody.”

But the sentiment here is neither abstract nor simply parroted from Fox News. It’s based on lived experience. In Louisiana and elsewhere, leaders at all levels and in all branches of government have repeatedly failed to protect residents from the harms of industry. Enforcing rules upon poor people is easier than getting corporations to follow the law, and the hypocrisy grates. As Harold says:

The state always seems to come down on the little guy…Take this bayou. If your motorboat leaks a little gas into the water, the warden’ll write you up. But if companies leak thousands of gallons of it and kill all the life here? The state lets them go.

This leads to deep-seated suspicion and disdain for public-sector employees.

There’s another factor fueling scorn for the government: envy. Just about everyone we meet in Strangers is poor, relying on Social Security and/or Medicare to survive. When asked, they vastly overestimate the numbers of people whose salaries are paid by the government. What government workers actually do is not apparent, and the fact that they earn comparatively good salaries and have job security strikes Hochschild’s subjects as extremely unfair. Since they don’t feel that the government serves them, they assume government workers are lazy as well as overpaid. The envy is searing and palpable.

Worse, the government takes money that her subjects regard as rightfully theirs, in the form of taxes, and gives it to them—not just government workers, but also the people her subjects see on TV: Syrian refugees, other people’s children, black students going to college. Feeling robbed is bad enough. But being robbed year after year as you are slipping backward is extremely hard to take. To the subjects of this book, the people who do seem to receive aid are “cutters”—they are cutting in line while others are patiently waiting. That’s a metaphor that emerges from Hochschild’s interviews, one that made sense to her subjects.

Is this book about people who live on government assistance and despise other people who get help from the government? Yes, but that paradox doesn’t explain anything by itself. Hochschild’s deep stories shed some light on what creates the paradox.

From plantations to Trump rallies

Readers who expect to find clear-cut evidence that racism is a driving force among Tea Party members will be disappointed by this book. However, Hochschild’s subjects make clear that empathy for strangers makes little sense to them. And since most do not have Black friends, relatives, or colleagues, African Americans as a group fall outside their hyperlocal spheres of empathy, as do refugees and immigrants.

It’s hard to tell how much Hochschild endeavored to discuss race; there are few explicit discussions about race in the book. She seems to accept what her subjects left out.

And yet, near the end of the book, Hochschild touches on the legacy of slavery in the history of Louisiana—and how class and race might contribute to support for someone like Donald Trump. Hochschild quotes from The Mind of the South, the 1941 classic by W.J. Cash: Plantation owners “threw up walls [which]...enclosed the white man, walls he did not see.” Poor whites did not see themselves “locked into a marginal life” but as a “potential planter or mill baron.” Hochschild theorizes that white sharecroppers and tenant farmers envied and respected wealthy plantation owners, and distanced themselves from “the terrifying misery of the traumatized, short-lived slave.”

It’s a legacy that comes alive in the final chapter, when Hochschild attends a rally for Trump.

Hochschild describes the emotional power of the rally, where Trump’s passion and appeal to national pride seem to transform the crowd. Her description helped me to see that when Trump celebrates bravado, he is celebrating the idea that bravado is rightfully theirs. His power is his ability to inspire them to feel pride in who they are, and in the ritual they do, leaving behind the sadness and shame that accompanies their losses.

What are we supposed to do with the knowledge we gain from scaling the empathy wall? This is not an easy question. We may get a more informed sense of how to arrive at “common ground”—solutions that are tenable to conservatives rooted in the Bible Belt. After all, we all want clean air and clean water. Tea Partiers hate regulation because they see a zero-sum equation: Regulation kills jobs. But they are not against more jobs and a healthier environment.

Maybe we need to account for the deep desire for honor and standing that Southern white men seem to crave. Perhaps we need to think more about how to create the trust that would be needed for a wider dialogue.

Strangers in Their Own Land doesn’t try to figure out how to solve the world’s problems or bring together a new coalition to address them. Hochschild’s mission is to open a window into the minds and hearts of people who seem alien and irrational to blue-state liberals. It’s up to us to take it from here.