Many reasons have been offered for the increasing polarization of political attitudes. Now, a new study uncovers a different, more personal catalyst for moving to the far left or right.

It finds people who have experienced significant adversity in their lives are more likely to gravitate toward an extreme spot on the ideological spectrum.

This appears to be an example of “compensatory affirmation” — the widely reported tendency of people to respond to uncertainty or fear by clinging more closely to the belief systems that give their lives meaning. It appears that need to believe moves many to a more extreme position. 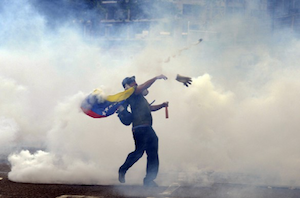 A research team led by Daniel Randles of the University of Toronto and Roxane Cohen Silver of the University of California–Irvine presents its findings in the journal Social Psychological and Personality Science. The researchers used data from the Societal Implications Study, whose 1,613 participants were a nationally representative sample of Americans.

Participants were interviewed annually for three years, from 2006 through early 2009. On each occasion, they were asked their opinion on a series of questions referring to intergroup hostility and aggression, such as “The U.S. is justified in using torture to protect national security.”

“Cumulative lifetime adversity was measured by asking respondents whether they ever experienced each of 37 negative events, and the ages at which they occurred,” the researchers write. These included an illness or injury, physical violence, the death of a loved one, and experiencing a disaster such as a major earthquake or flood.

In their initial questionnaire, participants reported which of these they had experienced, how often, and when. As part of the two follow-ups, they updated the list to include more recent experiences.

The researchers found that, “regardless of direction, everyone is moved by adversity to become more polarized in their beliefs.” What’s more, experiencing a greater number of painful events nudges people “to holding ever more extreme positions.”

This shift “appears to be more strongly related to the experience of past, rather than recent, adversity,” the researchers add. They speculate that “once a person begins to show a tendency toward polarized thinking, the process becomes self-reinforcing and permanent.”

These findings come with several cautionary notes. The researchers point out that hardening one’s political beliefs as a “coping strategy” may be restricted to individualistic cultures such as our own. They add that adversity “is only one contributing factor behind a person’s motivation to take extreme or polar opinions.”

Still, it’s instructive to understand that certain psychological needs drive many people to the faux certainty of extreme beliefs. Rather than argue with your politically rigid neighbor, it might be more productive to get them to talk about the difficulties they have endured.