Central Avenue in Long Prairie, Minnesota, looks different than what you might expect from a small rural community in the United States. 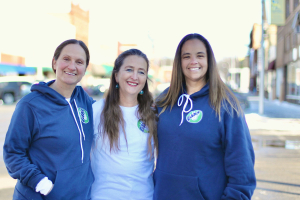 There’s the large U.S. Army helicopter with a red cross painted on its side perched on a pylon at the corner of First Street and Central Avenue, a memorial to war veterans. Monuments are pretty common in small town, USA. But in a growing number of small towns, there’s something you might not expect—an increase in Latino-owned small businesses.

Johanna Díaz Torres, 43, arrived in Minnesota in 2018. She left her job at the University of Puerto Rico after Hurricane Maria, following her brother who lives in the state. “I came with my luggage and my kids,” she says. “That’s it. Just taking a risk to have a better quality of life.”

In 1990, Latinos were 9% of the town’s population. Now, they’re 32% of about 3,300 residents—a disproportionately large number, especially when you compare that to the 6% Latino population in the rest of the state. Latinos aren’t the only non-white group in Long Prairie, though: 20% of the town identify as either African American, Asian, Native American, or multiracial.

Local reporting in 2018 showed that immigration was a factor in growing the town’s population. That’s true of many small towns in the United States: In August 2020, the Population Research and Policy Review published a paper by Daniel Lichter and Kenneth Johnson that found that populations in many rural areas would be falling if not for Latino immigration.

Along with Dominicans, Puerto Ricans (who are U.S. citizens) make up a significant portion of the newer Latino population in Long Prairie. Díaz Torres says that most Latinos arriving in the town shared her goal of a better life—and many have embraced entrepreneurship as their path. Many people came to work agriculture jobs at the large nearby packing and processing plants. People put down roots and stayed in order to have a better life for themselves and their families. And along the way, some traded in their jobs at the factories and processing plants and now run businesses of their own.

Luan Thomas-Brunkhorst, 53, who works for the Long Prairie Area Chamber of Commerce and Economic Development Authority, says the small rural community went from one Latino-owned business in the downtown area in 2000 to about 20, nearly 20 years later. This number includes businesses still in the planning phase.

This growth mimics what some nonmetro areas in the country are experiencing—big growth of Latino populations. In the past decade, Latinos accounted for just over 50% of population growth in the United States, bringing tremendous economic vitality to their communities. Nationally, Latinos are starting businesses at almost twice the rate of their white counterparts. They provide benefits for their employees at higher rates than their white counterparts. And they’re more likely to have Latinos on their leadership teams. This could increase community well-being for Latino ruralites by creating culturally specific public meeting places and foundational wealth for generations to come.

That’s according to the 2021 report, State of Latino Entrepreneurship, published by the Latino Entrepreneurship Initiative, which is part of the Stanford Graduate School of Business. Marlene Orozco is one of two principal investigators of the research, as well as the associate director of the Stanford Latino Entrepreneurship Initiative (SLEI). She says the research focuses on Latino business owners to understand opportunities and challenges to a fast-growing segment of the business population. It’s work that can help researchers understand small-town developments. As other studies suggest, supporting the economic health of immigrant communities in places like Long Prairie can help nurture everyone’s well-being.

How demographic shifts are changing one community 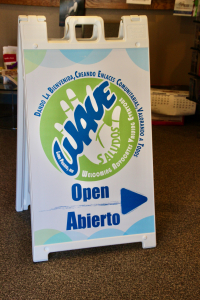 To address the needs of a changing community in Long Prairie, the University of Minnesota Extension and the Long Prairie Chamber of Commerce launched the WAVE/Saludos Center in 2021. The goal is to help newcomers, many of whom happened to be Latino immigrants, navigate life in the small town. WAVE stands for Welcome Advocates Valuing Everyone, and “Saludos” is a common Spanish greeting. Díaz Torres says at WAVE/Saludos, “we are trying to connect different entities and provide more information for the community.” WAVE, along with the Latino Economic Development Center, helps Latinos start new businesses by getting them the information and support they need.

Elizabeth Quillo, 55, moved to Long Prairie nearly 23 years ago. When word got out that she spoke Spanish fluently, Quillo says, she started getting calls to help translate for Spanish speakers at the local hospital. Now she owns VIDA, a Spanish-English translation business, with Díaz Torres, which helps not just people in Long Prairie but in surrounding towns and cities, as well. She also works as a nutrition educator with the University of Minnesota Extension.

Quillo, Thomas-Brunkhorst, and Díaz Torres run WAVE/Saludos. According to Thomas-Brunkhorst, the town, with the Minnesota Department of Employment and Economic Development and the Initiative Foundation, is in the process of applying for a Main Street Revitalization grant from the federal government. The city intends to use the funds to increase jobs, the tax base, and business ownership by people of color. This money could assist Latino entrepreneurs who bought the two biggest vacant buildings on Main Street. One of the buildings is an opera house that has been shuttered for about a decade.

“It’s exciting for the community because now we have businesses,” Thomas-Brunkhorst says.  “We have economic development and we have something there that people can visit.”

From community businesses to community well-being

While research into the economic vitality of immigrant communities and the well-being of towns as a whole is quite limited, there are studies that point to a link.

In a paper published in the Annual Review of Sociology in 2019, for example, Martha Crowley and Kevin Stainback point to a link between small businesses and factors like lower infant mortality rates and increased spending on libraries and public schools. Based on this evidence, they argue that there’s a “relationship between large retail firms and community well-being that is contingent on the local economic structure.”

A research firm based in the United Kingdom called What Works Centre for Wellbeing recently published a brief that breaks down the connection between community well-being and community businesses into three key areas: community engagement, skills development, and strengthening community infrastructure. The brief borrows from a 2008 study to define community well-being as “the combination of social, economic, environmental, cultural, and political conditions identified by individuals and their communities as essential for them to flourish and fulfill their potential.”

The brief points to benefits from local pride to improved confidence to trusted places for people to meet and collaborate. One key connection between community well-being and local business is the presence of “third places,” which are community gathering points (other than a person’s home and workplace) that allow people to connect and engage with their neighbors. A large retailer or a chain coffee shop could be a third place; so are public libraries and public squares.

But what’s more, community business is one of the essential ways to create financial stability for future generations. “We know that [business ownership] can afford great wealth prospects,” says Marlene Orozco of the Stanford Latino Entrepreneurship Initiative. “If we can support the scaling of existing businesses, I think we can really tap into that potential of it being a vehicle for wealth creation.”

SLEI will be releasing 15 regional reports of national metro areas with high Latino populations where Orozco says they can access “enough statistical leverage to draw some conclusions for Latino businesses.”

Their work so far supports strategies like the one embraced by WAVE/Saludos. Every county in the United States has a small business development center or some sort of business-serving organization, says Orozco. She says equipping these organizations with resources to help serve Latino business owners in nonmetro rural areas is a good first step. Ultimately, however, Orozco sees empowered, educated Latinos as working at every level of business and becoming “the architects of our own solutions.”

On a deeper level, reports like the State of Latino Entrepreneurship help change the larger narrative of Latino existence in the United States by elevating overlooked stories. Orozco says that the focus on Latinos as undocumented immigrants—and false talking points about being a drain on the economy—are upended when reports like the SLEI’s are published.

“To the extent that we can crack that narrative, share those stories, I think it’s really critical for folks. I think it will ultimately support the community’s well-being, knowing that there are success stories to follow.” Orozco adds, “You can’t be what you can’t see.”