The United States has been particularly bad at managing the coronavirus outbreak. Among the nations of the world, we currently have the fifth highest number of deaths per 100,000 people, with over half a million dead from the virus and counting. 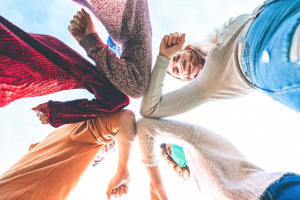 Yet the effects of COVID-19 have not been evenly distributed across the country. Some communities are faring better than others, both in terms of viral spread and death. Some research suggests that a community’s population density, health care capacity, and leadership around promoting mask-wearing and physical distancing all make a difference, among other factors.

Now, a new study suggests another important community resource for fighting the pandemic: social capital, the network of relationships within a community. According to the study, counties where people trust each other more, feel more connected, and care for each other more have lower infection rates and fewer deaths from COVID.

For the study, researchers Christos Makridis of the Massachusetts Institute of Technology and Cary Wu of York University in Toronto compared over 2,700 counties spread across the United States, representing a variety of communities with different characteristics. Their data for infection and death rates came from a report put out by Johns Hopkins University tracking the virus.

For social capital, they used data from two large surveys that looked at elements considered by the Joint Economic Committee to be essential to social capital, such as stable family structures, trust in social institutions, and how much people vote, volunteer, help out their neighbors, and more. They also looked at basic demographic information, such as the racial composition of a community; the average age, education level, and income; the population density; and whether it is rural or urban—all factors that could influence the results.

Accounting for these factors, they found that communities with higher social capital had lower infection and death rates from the virus. Specifically, counties in the top 25% of social capital had nearly 18% fewer cases of COVID-19 and 5.3% fewer deaths from COVID-19 per 100,000 people than those in the bottom 25%.

Makridis believes that there is a good reason why this might be the case.

“Individuals that trust each other more and respect one another more are probably going to maintain better hygiene and not take unnecessary risks,” he says. “While that’s maybe not too surprising, it’s important to make the point in a quantitative way.”

To look more carefully at how different kinds of communities fared during the pandemic, Makridis and Wu performed additional analyses. They found that in lower-income communities, social capital seemed to matter more for preventing viral spread than it did in prosperous communities—possibly because wealthier communities have better health care, healthier food supplies, and more people able to work at home, all of which are protective during a pandemic, Makridis says.

“The more that norms and trust encourage smart behavior, and the more that people in a community can be kind and loving of one another, the more they’ll be able to mitigate the transmission of the virus without extra resources [or in spite of crowding],” he says.

Makridis and Wu also considered which aspects of social capital mattered in the face of COVID-19. They grouped elements of social capital into categories: family unity (how stable family ties are), community health (the health and available health care in a community), institutional health (how much people trust institutions and participate in things like voting or the census), and collective efficacy (how much people help each other, volunteer, participate in community activities, etc.).

While community health was strongly connected to a reduced impact of the virus, and family unity also played a role, the second most important factor was collective efficacy—the ability of a community to come together in common cause.

“Obviously, community health is going to be important in a pandemic—if a county doesn’t really have good public health infrastructure, there’s not much you can do to avoid the spread of the virus and extra deaths,” Makridis says. “But norms and trust are important glue during crises, too. As far as I know, we were the first to make this point as it relates to the coronavirus pandemic.”

Protecting communities in the future

This suggests that communities should be trying to capitalize on their social connections. But that’s hard during a lockdown, of course. While sheltering in place may have been effective at slowing the spread of the virus, Makridis worries that it could have unintended consequences on a community’s long-term social and economic well-being. For example, he points to how lockdowns have decimated the child care market in many places, which will be hurtful to families when the economy reopens.

He believes that civic leaders should think more broadly about the impact of policies created to fight against the pandemic. Preserving social capital is important, he says, because it can help a community’s response to the virus.

“Because of the role that social capital plays, you can mobilize support and mobilize actions at a local level, even if it’s not happening at a federal level,” he says.

He points to a growing body of research showing that social capital helps communities prevent and recover from disaster, including other epidemics, such as the ebola outbreak. He believes his paper is the first to suggest that social capital matters for slowing the viral spread and death from COVID-19, too.

Going forward, Makridis hopes to study how quarantine policies have affected social capital within communities over this last year—to see if they have increased or decreased trust. He’s also interested in how political partisanship and religiosity within a community affect social capital.

Unfortunately, our current political divide has been a major obstacle to building social capital and, therefore, getting through the pandemic, he explains. If we could listen to each other without rancor and start from a place of caring for one another, says Makridis, we would be so much further along in this fight.

“It might seem really simple and common sense, but it’s worth repeating: If you love one another, that’s the starting point,” he says.