Twenty-five years ago, in his book The Spiritual Life of Children Robert Coles made a historic effort to bring children’s spirituality into focus. A child psychiatrist, he interviewed children in many life circumstances about their conceptions of God and the role of spirituality in their lives. A kind of oral history of children, it was considered a work of grace and beauty. 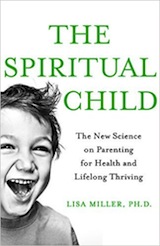 Now Dr. Lisa Miller is making her own attempt with The Spiritual Child: The New Science on Parenting for Health and Lifelong Thriving. It’s a brave thing to do in the current zeitgeist, where religion is politicized and atheist activism is on the rise.

Where Coles was interested in children’s understanding and used their own words and drawings in his book, Miller takes a top-down approach and advocates for spiritually-oriented parenting based on research. And she is no novice—Miller is a clinical psychologist and professor at Columbia University, Teachers College; co-editor of the journal Spirituality in Clinical Practice; Director of the Spirituality Mind Body Institute, and author of numerous studies on teens, depression, and spirituality.

Spirituality, says Miller, is a natural, biologically-driven experience for children, and is the “central organizing principle of inner life” later in adolescence. Miller defines spirituality as a transcendent relationship with a higher power that is loving and guiding, be it God, nature, or a universal spirit—as opposed to religiosity, which is more of an adherence to a religious denomination or creed. When spiritual growth is supported, Miller says, children and teens thrive; conversely, the absence of spiritual support causes alarming suffering and is responsible for the rising rates of depression, substance abuse, and other maladies in young people.

Miller puts forth two main claims: The first is that we are all biologically “hardwired” for a spiritual connection. Babies come into the world with an intact spiritual attunement that is “designed by nature” to prepare them for future developmental challenges. They are naturally connected to the transcendent—to nature, ritual, symbolism, dreams, empathy, and mystical experiences. A child reacts with reverence toward a dead animal, for example, or spontaneously overflows with joy—as when Miller’s 16-month old son stepped outside and, seeing the stars overhead, yelled, “Thank you, God!”

I know what she’s talking about. I, too, loved the sweet elixir of my children’s other-worldliness—their sand altars on the beach, elaborate spiritual ceremonies, deep empathy, attraction to nature, animal burials—that would by contagion put me in an altered state of consciousness. But in her romantic enthusiasm, Miller oversteps, making strong statements about children’s development and parenting that ignore or minimize other scientific research. For example, Miller says that newborns are in a state of bliss, echoing an old notion that infants are “undifferentiated” beings. But we know that young babies are also busy little scientists scanning, analyzing, and making sense of their environment.

Miller also minimizes alternative explanations of well-being. She reduces secure attachment to a “helpful theory,” when in fact decades of research have shown it to be one of the strongest predictors of positive child outcomes. She draws on Paul Bloom’s book Just Babies: The Origins of Good and Evil to show that children are born with empathy, but she fails to acknowledge his more nuanced point that they are also born with other tendencies, like an ingroup-outgroup bias—that can separate and diminish others depending on the experiences they have over childhood.

In other words, development is complicated.

Miller’s second thesis is that teens experience a “spiritual surge” in the second decade of life and that successful “spiritual individuation” is the single most protective factor against the many risks, including depression and addictions that can derail teens. Her own research shows that teens who have a genuine relationship with a higher power (compared to those who don’t or who are simply religious) are 70-80 percent less likely to heavily use or abuse substances, and are 80 percent less likely to have a recurring depression (some depression is normal, Miller says, as part of the spiritual search for meaning).

American teens are indeed in crisis. Their stress has eclipsed that of adults for the first time since we began recording it. They rank at the bottom on measures of well-being compared to other developed countries. And rates of psychopathology in teens have risen over the last 75 years. Undeniably, they need help.

And Miller is adamant: “In the realm of human experience, there is no single factor that will protect your adolescent like a personal sense of spirituality.”

Miller chastises parents for “severing” children’s spiritual development and dropping the “spiritual ball.” In the process, she gives short shrift to alternative paths to positive outcomes like authoritative parenting practices which four decades of research has proven to be highly protective of youth development. And what about atheist or agnostic families who raise well-adjusted children, or families (like mine) where the parents were spiritually-oriented but the children did not follow suit? Miller also extolls the virtues of the Native American coming-of-age rituals while failing to explain that tragically, Native American youth have the highest suicide rates among teens.

Policies matter, too—which Miller doesn’t acknowledge. Rising inequality and the college industrial complex put untoward pressure on youth to achieve. And indeed, one of Miller’s best insights is that today’s pressure to achieve is preventing youth from healthy individuation, something they need time and exploration to achieve. Unfortunately, though, she fails to connect this observation to social policy and instead lays responsibility in parents’ laps, just as most other public figures do.

There are pleasures in The Spiritual Child, notably Miller’s enjoyment of her own spiritual life and in nurturing a spiritual orientation in her three children. She conveys well the sense of beauty and expansiveness of going beyond the ordinary self, of feeling part of something greater, something sacred. And the book’s short sections on how to know if your child is spiritually inclined, and how to talk with teens about spirituality have practical utility.

But from a scientific perspective, the book is skating on thin ice. More research needs to be done and it needs to articulate better with the existing research on child and adolescent development. Alternatively, the book could have been stronger had Miller taken a page from Coles’ earlier work and relied more on interviews and anecdotes. There would be much to gain from hearing directly from spiritually-oriented families about their experiences and practices, especially with teens. Because as Miller herself notes, cultivating spirituality on a large scale will be an uphill climb: In a survey she reported from the Pew Research Center, only four percent of teens said that becoming spiritual was a goal.