How does human morality arise? 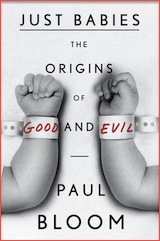 Philosophers have long tried to solve that puzzle through thought experiments. But Paul Bloom, a philosopher in a psychologist’s lab coat, seeks the answer in the minds of babies in his new book, Just Babies: The Origins of Good and Evil.

Children have sometimes been called morally neutral blank slates, or else depraved beings that need civilizing. But Bloom gathers decades of research to make a more optimistic case.

Evolution, he says, has biased infants toward connecting with others in positive ways: We come into the world wired for good.

The roots of a moral sense

A moral sense encompasses many qualities babies don’t yet have fully developed, like anger toward cruelty and guilt about transgressions, as well as judgments about fairness, motivation, desire, empathy, and more. But the foundations of these qualities, researchers have discovered, are built into the infant mind.

Babies, for instance, can tell a helper from a hinderer—and they prefer the helper. When shown vignettes of a square helping a ball up a hill and a triangle obstructing the ball’s progress by pushing it downhill, three-month-old babies preferred to watch the square. Six-to-nine-month-old children overwhelmingly chose the helper shape over the hinderer to play with. Five-month-olds preferred shapes that opened a box for another shape or rolled a ball to another puppet. Older babies swatted at or punished bad puppets, but they rewarded good puppets with treats.

Interestingly, the babies’ negative reactions to the “bad” shapes were stronger than their positive attractions to the “good” ones. Moral outrage, it seems, begins early.

Helping behavior shows up early in life, too. In numerous studies, one-year-olds, especially girls, show compassion by assisting others in distress. Toddlers and preschoolers mete out judgment, helping those who help. Children at that age also show kindness to those who are kind, but not to people who are cruel or who have teased them.

But babies are also wired for vulnerabilities. Many of these support survival—but they can also create moral problems.

Children can also be spiteful and stingy, hierarchical and punitive. For example, infants tend to be wary of strangers and show few spontaneous gestures of kindness to them. Young children also show a preference for those like themselves in gender, age and race, which could be taken to suggest that sexism and racism begins early.

This points to one of the book’s strengths: Written in smart, snappy prose, Bloom adds nuance to discussions about what we are “wired for”—which is to say, much goodness as well as the potential to run amok.

Yet it sacrifices depth for breadth. Notably absent are discussions of cultural variations or gender differences in moral behavior among children. And Bloom does not point out that no one has ever shown where or how this so-called “wiring” happens in the brain and nervous system. We accept the construct uncritically.

Finally, Just Babies would have benefited from more stories and anecdotes about children, bringing their moral dilemmas to life, as Robert Coles did in his 2007 book The Moral Life of Children.

The bottom line is that babies are literally born ready to choose between right and wrong. How to best build on their innate moral foundations is the challenge to education, parents, and society. Bloom rightly concludes that we can and should overcome moral vulnerabilities with reason—that is, training them from early on to mitigate their knee-jerk reactions and self-interest with knowledge of feelings and ideals beyond themselves.

I would add that reason will not get us there without the skills to manage emotions as well. Fortunately, both reason and emotional skills can, and should, be taught. The stakes for a compassionate society are high: Babies’ potential for good is quite simply ours to use or lose.