Today is Super Tuesday, 2020, when voters in 14 states and one U.S. territory will decide who will represent the Democratic Party in the race against the current president.

One issue has dominated the primary debates: Why is wealth and power so skewed in America, and what can we do about it? As Senator Bernie Sanders said in the Nevada debate, “The problem is, as Dr. Martin Luther King reminded us, we have socialism for the very rich, rugged individualism for the poor.”

These arguments aren’t new; they’ve raged for hundreds of years in the United States and around the world. Today, depending where you reside on the political spectrum, you may think, for example, that the rich simply have too much money and that it should be redistributed to the rest of the population, or you may think that the wealthiest in society earned their money and that everyone else must simply work harder.

We often think that people on the other side of us in these debates have nefarious motives. Maybe they’re unduly envious of the rich—or they are selfish and don’t want to share. But what if our beliefs about distributive justice come from different foundations?

That’s a question that was recently explored by a team led by Peter Meindl, a psychologist at Calvin University. They conducted five studies published late last year in Basic and Applied Social Psychology. 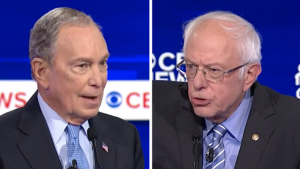 In the Democratic primary debates, Michael Bloomberg (left) has represented a merit-based vision of a good society, while Bernie Sanders (right) has championed redistributive policies.

This research builds on moral foundations theory, which stipulates that while concepts of morality may vary across cultures, there are many similarities between them that may be the result of innate psychological systems. The social and cultural psychologists who created the theory, NYU’s Jonathan Haidt among them, identified several “foundations” that undergird the concepts of morality across the world, including care-harm, fairness-cheating, loyalty-betrayal, authority-subversion, and sanctity-degradation.

During the course of the studies, Meindl and his team gave participants questionnaires drawn from a website, YourMorals.org, to examine whether “different forms of distributive justice beliefs were positively associated with different moral foundations.” The associations they found suggest that there are “two basic sets of distributive justice beliefs, equality/need and equality/merit.”

These competing systems boil down to a difference in “what we think should be the ultimate goal of society,” says Meindl. According to their results, people who think the ultimate goal is well-being and happiness tend to favor equality and need-based distributive justice. Another group of people focus on safety and security, which this study linked to a belief that prosperity is the result of hard work. For many in that group, it feels morally wrong to tax the rich so that the poor have access to education, health care, and public transportation.

Meindl and his team found that these two foundations were both associated with different ideas about power. Those who believe in hard work tended to favor concentrated power, while those who believe in wealth redistribution wanted power to be more equally distributed, as well.

Over the course of the five studies, Meindl’s team sought to drill down deeper on what it means to have either set of beliefs. In the fifth study, participants were told they were either living in a place where it is essential “that the society is as dominant, strong, and powerful as possible” (the power condition) or where the goal of the society was to be “comfortable, enjoyable, and trouble-free” (the equality/need condition). The participants were then given a survey about how best to distribute resources. The researchers found that moral support for equality/need beliefs (linked to belief in redistributive policies) was higher in the well-being condition than in the power condition (and vice versa).

In other words, both groups of people respond to core beliefs about what makes a good society, rather than acting out of some simple form of self-interest. Those who think that the goal of society should be to maximize well-being and happiness believe more in equality and need-based distributive justice, while those who think that society must be powerful think that emphasizing merit is the best way to achieve that goal.

Why is this important? Because, argues Meindl, it can help us understand that competing ideas about resource distribution aren’t the result of “one group being jerks.” Instead, he says, “they’re divided by what they think is best or right about society in the first place.” He stresses that the link to moral foundations theory is speculative and a lot more research needs to be done.

But what Meindl’s research does tell us is that we when we disagree with each other about how to redistribute resources in society, we’re generally doing so out of good intentions. While this knowledge won’t end our arguments about redistribution, it will remind us that our opponents aren’t necessarily just selfish or envious for holding the beliefs they do.