“Welcome! Everything is fine.”

Those are the first words Eleanor Shellstrop (played by Kristen Bell) sees on the wall in front of her when she opens her eyes in the first minutes of the NBC television series The Good Place. 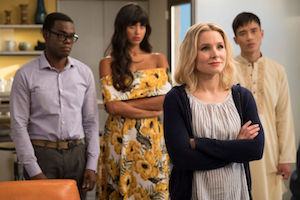 Chidi, Tahani, Eleanor, and Jason in "The Good Place."

At this point, anyone who hasn’t watched The Good Place at least to the end of its first season needs to stop reading, because I am about to spoil everything.

Which is something Michael would do. Because Michael is no angel. In fact, he’s a demon. And Eleanor isn’t in Heaven. She’s in Hell. Everything is definitely not fine.

The Good Place is no ordinary TV show. It’s hilarious and engaging and occasionally touching, but that describes many shows these days. What makes The Good Place different from the competition is its diabolical complexity and philosophical curiosity. At the heart of the show is a question near and dear to our hearts here at Greater Good: What is goodness and what makes a person good?

Here is what the The Good Place looks like when we watch it through the lens of the science of a meaningful life.

The ambiguities of empathy

In the Good Place, explains Michael, everyone is matched with a soulmate, infallibly chosen by a point system that sounds awfully similar to OkCupid’s. Unfortunately, as we discover, the soulmates are picked for torture, not bliss. The pathologically selfish, ruthless Eleanor is matched with someone who appears to actually be a good person, a moral philosophy professor named Chidi (William Jackson Harper). Unlike Eleanor, Chidi is empathic and thoughtful.

And that’s exactly why he’s in Hell. Chidi takes these qualities too far, which turns him into a neurotic waffler. Since he can’t stop seeing the world from other points of view, he doesn’t know his own—and so he cannot commit to anything. That might have been fine, except that his anxiety also makes him rigid, as he tries to compel other people to make decisions he cannot. In a series of flashbacks, we see how unhappy this combination made the two or three people who loved him when he was alive.

A lot of research into empathy explores this pitfall. “To put ourselves in someone else’s shoes, we must strike a balance between emotion and thought and between self and other,” write Robin Stern and Diana Divecha. “Otherwise, empathy becomes a trap, and we can feel as if we’re being held hostage by the feelings of others.” That’s a trap Chidi fell into when he was alive, and in The Good Place his task is to escape.

Michael Schur, creator of The Good Place, says that empathy is the core of the series. As he told the New York Times, “If you could really boil down good behavior and bad behavior in a big umbrella kind of way, it seems to have a lot to do with empathy and a general sense of the way your actions affect other people, and vice versa. So when we write the Bad Place crew, the simple idea was zero empathy.”

Is empathy the difference between a good person and a bad person? Is it a solid foundation for morality? That topic is a hotly debated one, in the show and in the real world. The psychologist Paul Bloom, for example, argues that too much empathy for lawbreakers can undermine justice. Chidi’s character pretty much exists to illustrate this one point: empathy without boundaries renders you unable to address suffering.

There’s another problem with empathy, which is that it’s not always benign. Scientists have pointed out that cognitive empathy (being able to take the perspective of others) is quite different from the emotional (or “affective”) kind. There’s an interesting moment in The Good Place when Michael says that demons like him live in human bodies so as to better torture them. That’s a psychopathic version of purely cognitive empathy—the demons don’t feel what humans feel, but walking in our shoes helps them to inflict physical and emotional pain on us.

Eleanor has a lot of cognitive empathy—in life, she excelled at selling fake medicines to senior citizens because she was able to expertly identify and manipulate their emotions. In The Good Place, Eleanor needs to learn emotional empathy, which helps her to feel the consequences of her words and actions.

“I felt bad about what I did,” says Eleanor at one point in her journey. “It was a weird feeling. Not used to it. Didn’t love it.”

Who does? That’s what Eleanor doesn’t yet understand: Feeling bad is sometimes a part of being good. What does Chidi need to learn? You can be good without feeling bad.

The tragedy of the birthday cake

Chidi illustrates another insight from the science of a meaningful life: Like many people who feel a deep connection to all of humanity, the cosmopolitan Chidi is permanently anxious—an association uncovered by some interesting studies. As psychologist Juliana Breines speculates, “If you truly care about the welfare of people across the world, many of whom are ravaged by war, natural disasters, and disease, how can that not cause you anguish?” To Chidi, an injury to one is an injury to all—and that noble feeling cripples him.

In contrast, Eleanor feels absolutely no connection to humanity. As we see in one of the series’ sometimes poignant/always amusing flashbacks, she was so antisocial in life that she refused a birthday cake from her coworkers because she didn’t want to feel obligated to get them birthday cakes on their special days.

As the series goes on, Eleanor starts to feel more empathy for Chidi—and this fellow-feeling expands to include the other two humans trapped with them in Hell, the narcissistic Tahani (Jameela Jamil) and the impulsive Jason (Manny Jacinto). Ultimately, her empathy even comes to include Michael. As the second season draws to a close, it appears that she is doing for Michael what Chidi did for her.

“I was just trying to prove that humans could torture each other,” says Michael to his demonic boss. “Instead, they helped each other, and got better.”

The collision of opposites is the stuff of great comedy, but The Good Place doesn’t take the easy way with Eleanor and Chidi. Sure, Eleanor calls him “the human sweater vest” (har har) and Chidi slyly mocks her self-absorption, but the most interesting thing about their relationship is how they lead each other out of isolation.

At the beginning, Eleanor and Chidi have only one thing in common: Their faults in life rendered them lonely and unlovable. That starts to change in the final episode of the first season. Eleanor chooses Chidi to teach her how to be good, at first, but it’s not the obscurely academic content of the lessons that helps Eleanor to grow. Instead, it’s the very connection she develops with Chidi through the lessons, and his willingness to help her even at some expense to himself.

As she tells him, “I was dropped into a cave and you were my flashlight.”

It’s a superb line, oft-quoted for a reason, because it conflates love with goodness and compresses romantic with philosophical yearning. (The allusion to Plato’s cave is far from accidental; The Good Place is dense with footnotes.) Of course, Chidi needs Eleanor, too, though neither of them knows that at first. She needs to learn empathy from him, but he needs her to teach him how to be…well, less uptight. Which is to say: Less afraid to choose, more rolling-with-it resilient. When Michael is about to erase all their memories at the end of the first season, Eleanor knows what to do. She leaves a note for herself that says one thing: “Find Chidi.”

Of course, when rebooted Eleanor finds the note, her first thought is that “Chidi” must be a kind of soup.

Indeed, The Good Place is positively subversive when it plays with the idea that we have one person out there in the world who is our “soulmate.” Initially, of course, soulmate is a cruel joke: Chidi and Eleanor are comically mismatched, as are Tahani and Jason. They’re funny because we all know couples like them—and some of us have been in those couples, who seem destined only to torture each other.

But, again, The Good Place doesn’t settle for some cheap laughs. As the series goes on, these flawed humans actually start to love each other. Not because their souls are mystically mated, but because Eleanor asks for help, Chidi gives it to her, and they together must learn how to solve problems and grow beyond themselves.

This is true to a different degree for Tahani and Jason. At first, the joke is that Jason torments Tahani by not being able to feed her vanity, and Jason is in a situation that requires superhuman self-control. This turns out to be exactly what they need: Tahani needs something to nurture besides her own ego and Jason needs someone to take care of him and help him to rein in his worst impulses.

“I was just trying to prove that humans could torture each other. Instead, they helped each other, and got better.”

―Michael in "The Good Place"

This reveals a truth that any marriage and family therapist can explain to you: Your soulmate is an accomplishment, not a gift from Heaven. Even if there is one person who is your perfect match in one given moment, there is no guarantee they’ll be perfect the next. People change—and this, to me, is the most important, scientifically validated insight from The Good Place.

Eleanor is a selfish jerk when she arrives in the Good Place, but she doesn’t stay that way. As the series goes on, she learns to empathize, forgive, apologize, help, cooperate, and love. She doesn’t stop being snarky, defensive, opportunistic, wounded Eleanor, of course, and this points to another truth about humanity that is hard for many of us to accept: Good people are not perfect people, and the seemingly perfect ones are sometimes not very good.

Like our soulmates, goodness is something we need to earn, every single day. We don’t become good on our own, by meditating on a mountaintop or taking a class. We need other people to bring goodness out of us. Your brand of goodness will be unique to you—but it will continually evolve in response to the people who love you, hate you, need you.

“The only reason we’ve come this far is because we’ve helped each other,” says Eleanor in the most recent episode. “And I don’t think anything’s going to feel like the Good Place if we’re not together.”