Should you pay your kids to read a book? Should prisoners be able to pay to upgrade their accommodations? Should someone be allowed to pay for the right to shoot an endangered black rhino?

These are some of the provocative questions addressed in Michael Sandel’s What Money Can’t Buy: The Moral Limits of Markets. Despite being about economics, What Money Can’t Buy is a surprisingly fun read, largely because of the shock value of the examples Sandel uses to make his points. 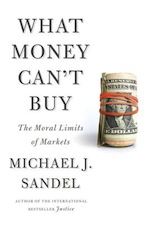 The thesis of Sandel’s book is that when market reasoning goes beyond the domain of material goods, it must “traffic in morality.” In other words, in order to decide what money should and should not be able to buy, we have to decide what values should govern various aspects of social and civic life.

He claims that one of the most significant developments of our time is that buying and selling increasingly governs the whole of life, noting that in just 30 short years, it has become normal in our society to accept and assume that nearly everything is for sale.

What are the risks of this uber-marketed life?

One is inequality. In a society where everything is for sale, life is easier for those with money, because money can be used to buy much more than just stuff—it can buy political influence, superior medical care, safe neighborhoods, access to elite schools, and even the right to cut in line.

The other is corruption. Sandel argues that putting a price on the good things in life can corrupt the goods themselves, because markets don’t just allocate goods, they express and promote certain attitudes towards those goods. For example, paying kids to read books might get them to read more, but may also cause them to see reading as work, rather than something intrinsically enjoyable.

Sandel goes on to provide a series of fascinating examples to help readers think through these risks and to make an even broader point: The good things in life can be corrupted or degraded if turned into commodities. He demonstrates that the market doesn’t always work in predictable ways, and that sometimes “marketizing” a good can change its meaning.

For example, when a daycare center charged no fee if parents were late, very few parents showed up late. With the goal of creating a disincentive for tardiness, the center decided to set a fee when parents arrived late. However, the incentive backfired. What ensued was a huge increase in late parents, who instead of feeling a moral obligation to arrive on time and spare teachers an inconvenience, now saw their relationship with the school in market terms: late arrivers could simply pay teachers for the service of staying after school.

The book goes on to grapple with some of life’s juiciest ethical dilemmas, such whether or not some things—kidneys, babies, wedding toasts, or (in Japan) an apology—should be for sale, or whether or not people should be paid to take their medications, lose weight, or stop smoking.

While Sandel doesn’t provide an easy answer for how to decide which goods should be bought and sold and which should be governed by nonmarket values, he does provide a provocative discussion and a clear framework for thinking through these intriguing issues.

“The good things in life can be corrupted or degraded if turned into commodities.”

Perhaps nowhere is this more true than in our treatment of animals in modern agriculture. The innate value of the lives of our fellow creatures has been completely subjugated to the production process. Farm workers are required to see other sentient beings as mere pieces of machinery or soulless objects, while consumers of animal products become complicit in this web of suffering when they fail to question and reject its results. Approximately ten billion animals are killed for food in the U.S. each year, yet the religious right that bemoans human abortion has absolutely nothing to say on the subject. Even they, it would appear, have grown accustomed to exchanging money for tidy little packages of food, with nary a trace of awareness of what that package really represents.

As the right-wing continues to push market-based solutions to ever more problems, this is a timely discussion. But no matter how correct we might be in highlighting the limits of the market, we will often find ourselves overpowered by the profit motive that underlies the right’s appeal to Milton Friedman’s theories. Put differently, the idealized concept of the market is not just a chimera but a propaganda device, enabling the people who control it to concentrate further wealth in their own hands.

Thank you for your thoughtful comment. While Sandel doesn’t spend a lot of time considering the treatment of animals in modern agriculture, your example certainly illustrates one of his key points—that markets don’t just allocate goods, they express and promote certain attitudes towards those goods.

In the book “What Money Can’t Buy”, Michael J. Sandel pinpoints one of the biggest ethical questions of our time. In a world where it seems that everything is for sale, are there any ethical issues in regards to a materialistic (Buy & Sell) society. Are there certain segments of live that should not carry a price?

Market values have saturated non-market norms in almost every aspect of life. Including, but not limited to: education, government, art, medicine, law, sports, relationships, and in some cases even family life. As noted in the day-care example.

Prompting the questions: Have we drifted from having a market economy to being a market society and is this where we want to be?

Interesting read. As time goes by less and less people really care about morals. This is a typical trait of a capitalistic society. To make it worse the children these days, do not even have the luxury to learn the understand the moral values their grand parent followed. Now its all money, money and Donald Trump!